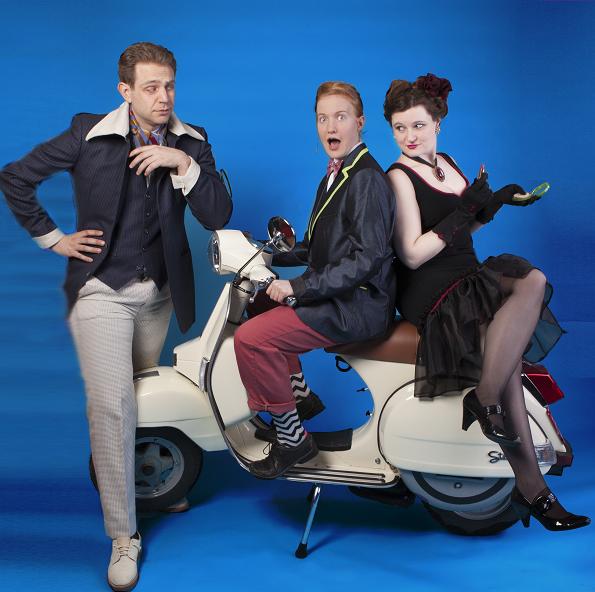 If you’re wondering whether you should go see Theatre Pro Rata’s production of Shakespeare’s Twelfth Night, I’ll make it easy for you: Go see Twelfth Night. It’s a perfect summer escape. It’s a light frothy romantic comedy that’s been trimmed down to size for outdoor performances. It’s a fast moving bit of fun to kick off a lovely evening.

“If this were play’d upon a stage now, I could condemn it as an improbable fiction.”

In a way I am both the best and the worst person to critique a production of Twelfth Night. Because it’s one of my favorite plays, I’m always happy to see it resurface in any context (in fact, there’s yet another Twelfth Night out in the suburbs right now as well, a collaboration between Chameleon Theatre Circle and Green T Productions). Because it’s one of my favorite plays, I can also be pretty hard on a production if I think they’ve screwed it up. My challenge is to make sure I point out all the reasons I fell in love with the story and characters in the first place, so other people can fall in love with them, too. Theatre Pro Rata’s production makes it easy to fall in love with this collection of misfits as they all fall in love with each other, whether they should or not.

“He that is well hang’d in this world need to fear no colors.”

Like all good comedies, it mashes together a pair of twins, cross-dressing, unrequited love, mistaken identities, and some alcohol-inspired mischief. Twin sister and brother Viola (MaryLynn Mennicke) and Sebastian (Alexander Stene) are separated in a shipwreck off the coast of Illyria and each believe the other dead (which they’re not). With help from her ship’s captain (Peyton McCandless, also the Music Director/Composer), Viola goes undercover as a boy named Cesario to serve the local duke Orsino (Derek Meyer). She quickly becomes Orsino’s favorite, much to the chagrin of her fellow page Valentine (Elliot Drolet). Orsino sends Viola/Cesario to plead his romantic case to the countess Olivia (Amber Bjork). But Olivia is more interested in Cesario, while Viola is more interested in Orsino, who continues to be hung up on Olivia, and round and round it goes.

Also pining for Olivia is Sir Andrew Aguecheek (Andy Chambers)—a fact which Olivia’s uncle Sir Toby Belch (Charles Numrich) uses to his advantage, getting Andrew to foot the bill for their almost constant partying and consumption of booze. When Olivia’s officious servant Malvolio (David Beukema) tries to put a damper on the reveling one too many times, Toby and Andrew conspire with Olivia’s maidservant Maria (Katherine Kupiecki) and her sidekick Fabian (Kelsey Cramer) to make an epic fool out of Malvolio. A counterfeit letter convinces Malvolio that Olivia is in love with him, and gets him to behave so strangely in her presence that Olivia fears for his mental health. Naturally, Toby, Andrew, Maria, Fabian and the court jester Feste (Victoria Pyan) are more than happy to help scare some sense back into Malvolio.

Meanwhile Sebastian comes ashore with sea captain and now devoted friend, Antonio (Eric Eichenlaub), who saved him from the shipwreck. Everyone who runs into Sebastian treats him as if he is Cesario, and when Antonio runs into Viola/Cesario, he thinks she is Sebastian. This, of course, leads to a lot of comical complications (romantic and otherwise). The fact that Mennicke and Stene look nothing like one another (except in their costume), and he’s easily a foot or so taller than she is, just makes the whole “mistaken identities” twin thing that much more ridiculous. The fact that the rest of the cast wholeheartedly plays along with the charade and is “astonished” by the big reveal at the end makes it somehow all the goofier.

“I’ll be revenged on the whole pack of you.”

The strong foundation that makes this production of Twelfth Night work so well is the same strong foundation Theatre Pro Rata lays out for all its productions, particularly of the classics—they make sure they understand what it means first. You can tell the difference between a cast who understands what they’re saying because they’ve taken the time to study it, and a cast that isn’t quite sure because they didn’t feel they had the time. Theatre Pro Rata makes the time. Because then the rest of their job is that much easier. If the performers know what they’re saying, they can convey the meaning more clearly. So even if the audience doesn’t know their Shakespeare, they don’t have to. Pro Rata knows it for them, and then just goes about the basic business of telling the story in the most entertaining way possible.

“If you be mad, be gone; if you have reason, be brief; ’tis not that time of moon with me to make one in so skipping a dialogue.”

In addition, Twelfth Night also got a masterful bit of trimming here. This version runs just a little over 90 minutes, straight through, no intermission. Director Carin Bratlie and trusty longtime dramaturg Christine “Kit” Gordon have carefully sculpted this cutting of the script so that it hardly feels like it’s been cut down at all. All the key characters are there. All the goofy plot twists are there. Every character gets their moment to shine. We even get some songs. I think I might actually be a little intimidated to be in a room with Bratlie and Gordon talking about Twelfth Night. I mean, I love this script, but they KNOW this script. Thankfully, all that applied brain power just makes the production that much more fun.

“I am all the daughters of my father’s house, and all the brothers, too – and yet, I know not.”

I must admit I never understood the allure of the whole “Shakespeare In The Park” concept. I always thought a play would suffer somehow by not having a stage and a theater around. Turns out I got that one wrong. Shakespeare and Twelfth Night work perfectly with this approach. What it does very effectively is boil down theatrical storytelling to its most basic building blocks—the actors and the text. And when the script is this fun, and the actors are this good, well then, what more do you need? (OK, you probably need Mandi Johnson’s amusing and colorful costumes. They add the visual punch that keeps the actors from blending into the surrounding foliage or random bicyclists passing through. And the potted plants that are part of Julia Carlis’ property design probably deserve an award for best supporting performance by an inanimate object in a comedy—when you see them in action, you’ll know what I mean.)

“Make me a willow cabin at your gate,
And call upon my soul within the house.”

Director Bratlie gets her energetic ensemble quite literally zipping from one scene into the next—someone heads off over there, someone else appears over here, saying their first line fast on the heels of other person’s last line. That approach keeps the whole thing moving along at a spritely pace that’s perfect for keeping this romantic comedy light and fun. Rather than seeming breathless, it’s more like breathing out a happy sigh.

“If ever thou shalt love, in the sweet pangs of it remember me.”

Both the actors and the audience will probably take a little time getting used to the great outdoors. If you’re going, bringing your own chair (or anything handy to sit on) is a good idea, unless you want to sit on the ground or hope for a nearby bench.  Since, as the clown sings, “The rain it raineth every day,” having a hood, poncho or umbrella on hand for the occasional light drizzle is good advice. And a handful of the cast are still adjusting to the fact that they don’t have walls to bounce the sound of their voice off of. Trust me, guys, in this situation, it is not possible to be too loud. Err on the side of volume. You may think you’re shouting at us, but we’re happy to be able to hear you.

“I have said too much unto a heart of stone.”

Twelfth Night is in a variety of locations around Minneapolis, St. Paul and Eagan, so be sure to check out the website, and also their twitter feed, if you’re concerned about weather updates. Shows are early (6:30pm), so you’ll still have the bulk of your evening free to enjoy something else after you’re done in Illyria. Sounds like a great summer night to me. Enjoy!