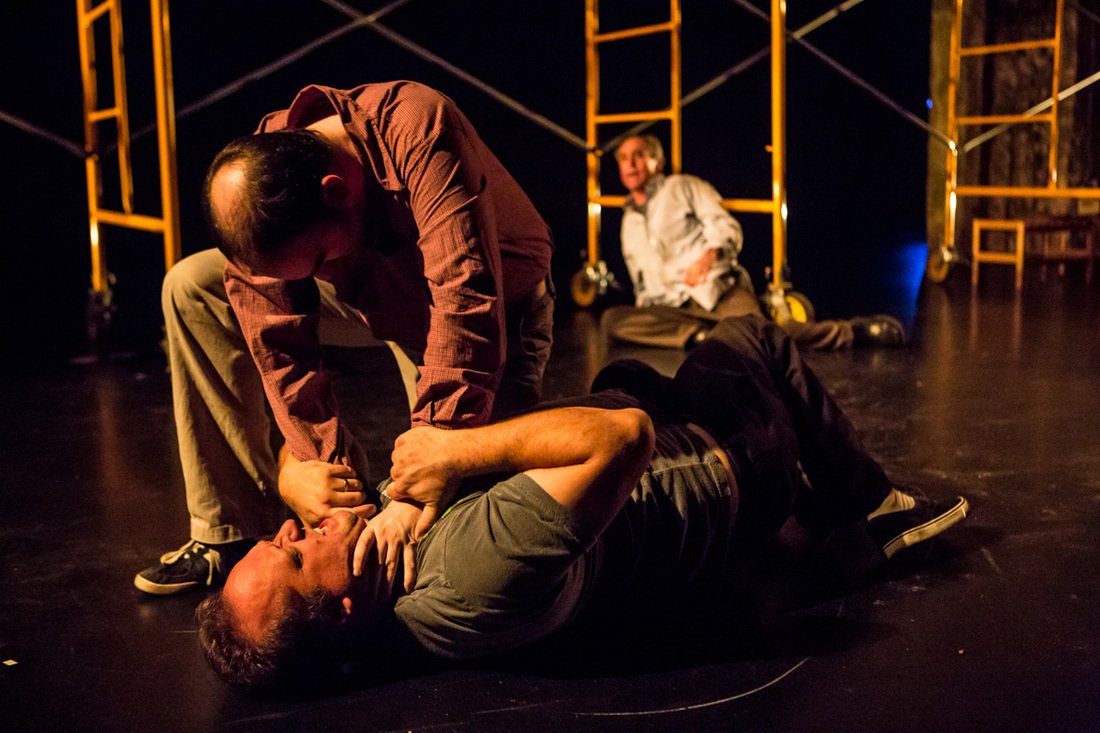 Actor/writer/producer Tim Uren really knows how to bring the creepy. His theater company Ghoulish Delights is presenting their inaugural production, Trust And Obey, as part of the Twin Cities Horror Festival, and the Horror Fest is a perfect home for this little tale. Nobody generates a creeping sense of dread quite like Tim Uren. His full gifts are on display in Trust And Obey. And he’s found the perfect director for this nightmare in Paul Von Stoetzel.

Set on a German U-boat during World War I, Trust And Obey details the unraveling misfortunes of a crew of hapless sailors trapped underwater while a supernatural force slowly turns them all against one another. Is it the wrath of the titan Oceanus, a small statue of which is plundered off the corpse of an enemy seaman by the dimwitted team of Bohm (Shad Cooper) and Schmidt (phillip andrew bennet low)? Is it the mindworm of dire warnings inflicted on the crew by the superstitious Bosun Mueller (Darrin Shaughnessy)? Or is it the madness of Captain Heinrich (David Tufford), brought on by a personal tragedy whose details only become clear in the play’s closing minutes?

“So we’re headed full speed in the wrong direction, and we can’t steer.”

The cause of the crew’s undoing could be any one or all of these things. The great thing about the play is that it doesn’t feel like a cheat that it never excludes any of these possibilities, or the possibility that they all might be tied up together. The only thing the audience is really clear on is that these guys are screwed. If any of them survives, it’ll be a miracle, and it will come at a very high cost.

“All the gods you have known before, they are as nothing.”

This play is not for the squeamish. In addition to a couple of gunshots, Trust And Obey also has the distinction of the only play I can think of in recent memory that really psyched me out with a special effect (credited to Sean McArdle). The unfortunate sailor Schneider (Andy Schabel) in charge of the torpedo room gets one of his legs mangled in an accident (or is it?) Since the captain refuses to turn the submarine around or find a way to hand off his crewman to another vessel that could get him medical attention, they end up needing to amputate Schneider’s leg below the knee. Schneider’s fellow sailors prepare him and hold him down. The captain comes on stage with a hack saw. He places the hacksaw against the sailor’s bare leg. OK, time for the lights to go down. The lights aren’t going down. He’s sawing. Oh my…

“Get me more bullets.”

Yet even though I don’t consider myself someone with a high tolerance for seeing pain inflicted on characters onstage, I have to say I enjoyed Trust And Obey. It’s a creepy story well told. Nothing seems excessive or gratuitous. It seems perfectly reasonable that all these bad things should happen in a story this dire, with stakes this unbearably high.

A nod has to go out to the as yet unmentioned members of the crew, Traube (Eric Eichenlaub) and Zimmer (Andrew Sass). They, too, have their moments that add to the general feeling of doom, mostly because they both start out fairly carefree, and are among those who survive the longest, yet both end up at the mercy of forces beyond their control that mean to do them harm. Tim Uren also does well as the increasingly horrified Lt. Klenze, loyal to a captain who cannot be trusted to put the best interests of the crew first. Appearing last, Dawn Krosnowski ties a scary little bow around this bloodbath in a cameo I won’t spoil but which is delightfully terrifying.

“Out here at sea, the rules are different.”

Tim Uren’s been working toward something like Trust And Obey for a long time. It’s enormously satisfying, and unsettling, to watch all the pieces finally fall into place. Well done.

Trust And Obey and the second annual Twin Cities Horror Festival both run through Saturday, November 9, 2013.