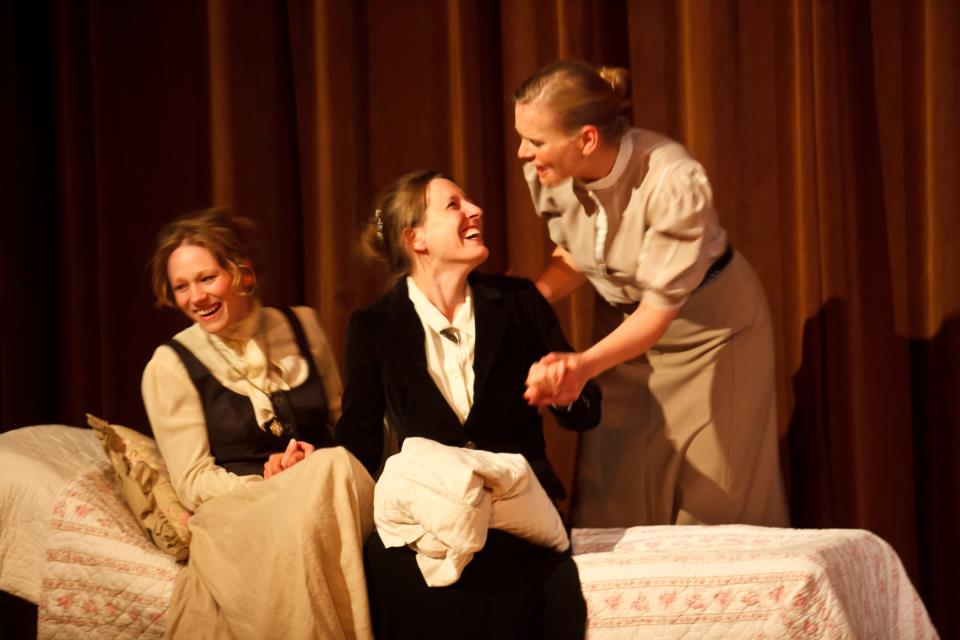 Chekhov wrote comedies.  Good companies like Nightpath Theatre remember this.  The bad ones treat them the same way a fellow student at my college once approached a scene in acting class.  When asked what his character was doing he replied, “I’m just sitting here, waiting to die.”  Uh… OK.  Thankfully Nightpath takes the completely opposite approach in their current production of Anton Chekhov’s The Three Sisters.  Are the sisters’ lives all sunshine and roses?  No, but there’s still a lot of laughter to be had from these ladies and the cast of quirky characters which surrounds them.

“Something vast is coming toward us.”

I was big fan of Nightpath’s production of Shakespeare’s Measure for Measure because it was so off-the-chart weird in concept that it somehow worked perfectly.  With The Three Sisters, director Maggie Scanlan takes a seemingly more conventional approach, but the production is anything but ordinary.  The Three Sisters uses all corners of the Walker Community United Methodist Church in a production that is staged just as much (if not more) for the God’s eye view of the folks who sit in the balcony as those who watch from the main floor literally in the middle of the many characters’ comings and goings.  It’s simple, but gorgeous.  (Katie Phillips’ work on set and props here deserves a lot of praise, as does Alice Fredrickson’s great costume design)

“I’ll walk you home every night for ten years, twenty years, until you chase me away.”

The three sisters of the title are Olga, Masha and Irina.  Olga (Mykel Pennington) gets ever more entangled at her job at the school, being promoted almost in spite of herself.  She’s so good at her job that it takes over her life and becomes a career.  Masha (Sheila Regan) embarks on a giddy affair with Vershinin (Edward Linder), the married lieutenant colonel of the regiment of soldiers that has set up camp in their provincial Russian town.  Piling one infidelity on another, Masha is also married, to the good-natured (and not as clueless as he seems) Kulygin (Joey Metzger), a teacher who might be a better match for Olga.  Irina (Kara Davidson), the youngest sister, is trying to find her purpose in life, while at the same time juggling a pair of competing suitors, also soldiers at the local encampment – the intense and menacing Solyony (Ben Yela) and the sweet and goofy Baron Tuzenbach (Foster Johns), a guy so perfect for Irina that you just want to shake her and tell her to wake up.

“Masha wishes everything was in a novel.  It’s simple.  It all works out.  But when you’re in love yourself, you realize that no one knows anything.”

Olga, Masha and Irina also have a brother Andrei (Tyler Stamm) whose gambling problem and bad taste in women cause the family no end of trouble.  Andrei marries Natalya (Andie Olthoff), a woman whose grating voice is only part of what makes her the sister-in-law from hell.  She may act like uncultured trash, but Natalya has passive aggressive (emphasis on the aggressive) down to an art form.  Before you know it, she’s taken over the house as a way of settling some of Andrei’s gambling debts and is rearranging the sleeping arrangements of the sisters in order to make room for her growing litter of children (not all of whom may have been fathered by Andrei).  Natalya even wants to kick some of the loyal family servants to the curb (Tyler D. Martin and Colleen Barrett).

“She’s honest and honorable, sometimes even a good person.”

Rounding out the players are Chebutykin (Robert Larsen), the local doctor who has a habit of falling on and off the wagon where the bottle is concerned.  He’s also a houseguest and close family friend who still carries a torch for the sisters’ long dead mother.  Plus, we have a couple of young lieutenants, Fedotik (Daniel Duren) and Rode (Seth Johnson), who do their best to provide entertainment of the musical and jokester variety.

“I’ve stayed behind like some old migrant bird that can’t fly anymore.”

Director Scanlan and her cast seem to know all these characters down to their bones.  There’s always an unspoken conversation just below the one that’s spoken, and you get the feeling that these people lived full lives before we encountered them, and will do long after we leave the theater.  When they step offstage, there’s a whole world of things happening which we don’t get to see which informs who they are when they reappear.  Some of them cast a long shadow over the proceedings even when they’re not present.  For instance, the heinousness of Natalya’s “sister-in-law who ate the family home” was so vivid in the first half of the second act, that I felt her presence throughout the second half, even though she was little more than an occasional offstage voice (kudos to Andie Olthoff for that bit of theater magic).

For the first time, I also feel like I not only understood the sisters, but all the men in their lives as well.  The emphasis remains, as it should, on the women.  But each of the supporting male roles were also so full and rich that it often felt like I was curled up with a good novel.  This is going to sound like a backhanded compliment but I know some of these actors, have even seen them in other productions, and was not prepared for how good they were in this production.  That’s a credit both to all of them, and the director who pushed them to a new level this time around.

“Soon the snow will come and cover everything.”

There are some moments that are so lovely and human, they draw you in and have you on the edge of your seat wondering what’s going to happen next.  When Foster Johns as the Baron, not an overly proud man to begin with, drops all remaining pretense of pride and openly asks for even the tiniest glimmer of hope that one day Irina might love him back, we’re holding our breath right along with him for her response.  A wonderful extended moment of shared, exhausted laughter between the three sisters in the second act really has us believing in that moment that Pennington, Regan and Davidson are family – and that anything is possible.

“I’ve aged.  It’s from getting angry at the high school girls.”

And yes, there is the repeated refrain of the desire to go to Moscow (which had a friend of mine declare that sometimes she just wants to tell them to “shut up and get on the train”).  But I realized this time, because of this production, that Moscow isn’t just a name or a destination.  Of course I knew that before, but this time I felt it, because these characters seemed so much more real to me.  Moscow for some is about wanting to return to the safety of the past.  For some it’s about the hope and possibility of a future not yet seen.  For some, it’s just an “anywhere but here” mentality, a mentality that might cause them to miss the good things in their current life they take for granted.

This may be a script where characters use variations on the word “boring” far too many times for the play’s own good, but unlike some lesser Chekhov productions I’ve seen in the past, Nightpath Theatre’s production of the The Three Sisters doesn’t have a slow or boring moment anywhere in sight.  It’s Chekhov done right, with a laughing eye on the absurdity of life.

The Three Sisters runs through Saturday, May 12th, 2012.  See brownpapertickets.com for reservations and more information.