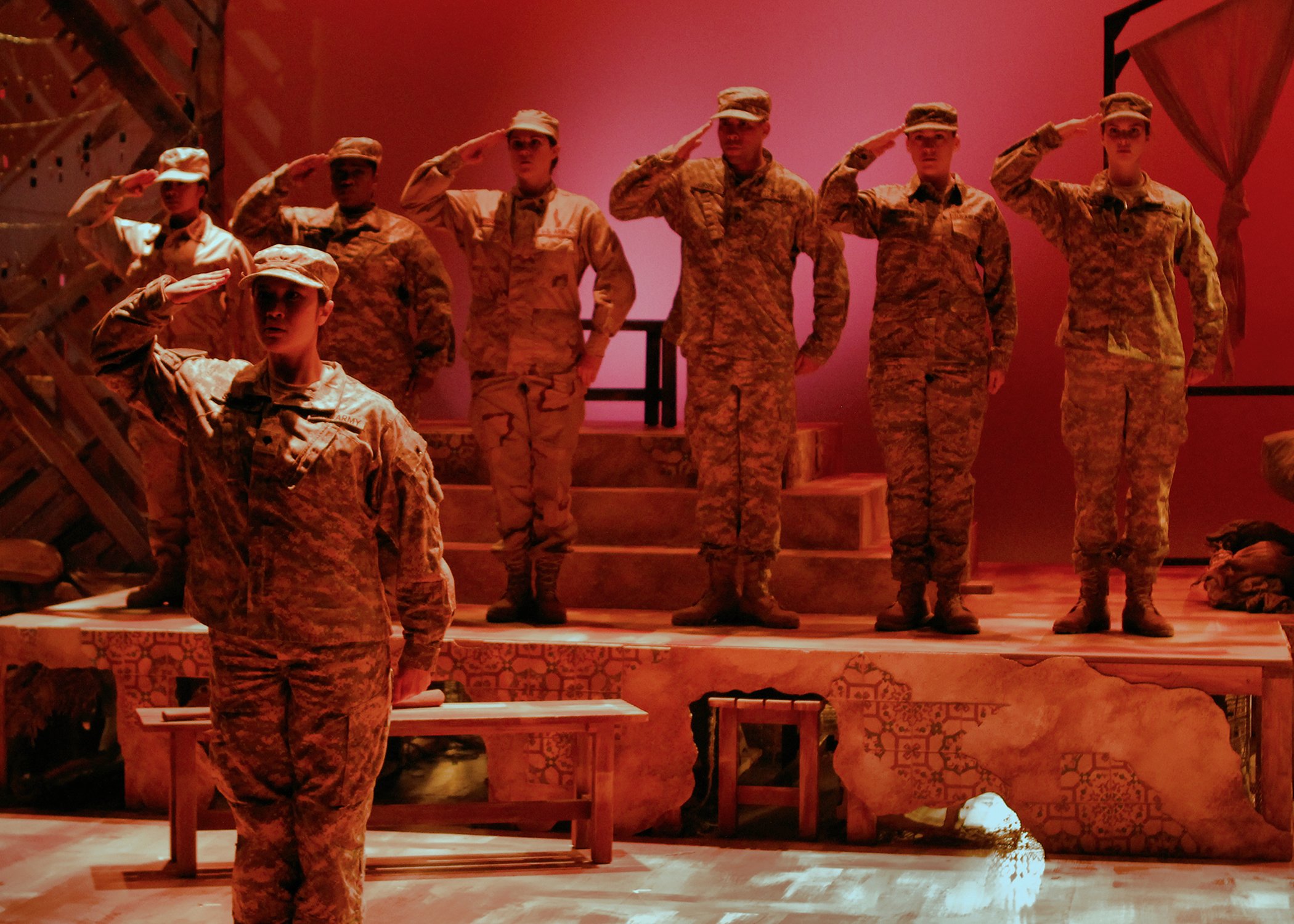 Dramas about soldiers at war might as well be critic-proof. If you have a problem with a story of soldiers in battle, you should be ready for someone to ask, “Why do you hate America?” The reason we even have the luxury of sitting in a theater and watching actors tell a story about war is that there are real soldiers, actually stationed in foreign lands, fighting to establish a little stability in the world and keep our country safe. People, myself included, feel so strongly about those who choose to serve their country in the military that it’s often hard to separate the subject matter from the style of presentation and judge it dispassionately.

“They’re all dead. But in a story, which is a kind of dreaming, the dead sometimes smile and sit up and return to the world.

History Theatre is giving audiences a double dose of war stories, both past and present, running two new plays in rep—the world premiere of Jim Stowell’s adaptation of Tim O’Brien’s classic novel of the Vietnam War The Things They Carried, and the regional premiere of Helen Benedict’s adaptation of her non-fiction expose Lonely Soldiers: Women At War In Iraq.  Each opening performance had a sizable number of veterans in the audience, and each performance received a rousing standing ovation. Both plays are full of compelling subject matter, skillfully directed (Leah Cooper on Things, Austene Van on Lonely), and served well by the same design team.  Both plays also have the blessing of committed actors bringing all their skills to bear to bring the stories and characters to life. Both serve up a healthy dose of catharsis, but I’d argue that one is actually a better piece of theater than the other.

“It was like standing for eight hours a day under a lukewarm blood shower.”

The Things They Carried would seem at first to have the tougher hill to climb here. So many people are familiar with the book upon which it’s based. Still more of us have been served up so many Vietnam stories, literal and metaphorical, over the last forty some years that things which are basic to any recounting of the war in Vietnam start to feel like well-worn cliches. Also, the adaptation was to be a one-person show, which are notoriously hard to write and act and direct in a way that keeps them interesting. For every great one person show, there are about a dozen that are all but unwatchable.

“When she was nine, my daughter Kathleen asked if I’d ever killed anyone.”

However, the one person in question here is actor Stephen D’Ambrose. D’Ambrose and director Cooper have collaborated several times before. And the script is being adapted by Jim Stowell who has been writing and performing his own one-person shows for years. Stowell knows how to structure a story to be performed onstage. If anyone can transform that book into a real play, it’s Stowell. And transform it he does. The framework for the tale is ever so slightly clunky—we find Tim in his home office, composing the book which will become The Things They Carried. Wisely, neither the script or production belabor this. We establish a man, writing, and he quickly transitions from his desk to his feet to tell, and perform, the story.

“What strikes me most is the man’s willful, almost ferocious, silence.”

O’Brien called on his own firsthand experience in the Vietnam War to craft this story. A young man flirts with the idea of draft dodging to Canada, but ultimately ships out overseas, surviving the war to become a man haunted by the past. Only when he returns to Vietnam with his young daughter in later years does he start to put some of those ghosts to rest. None of this story is told in linear fashion. We’re dropped into the middle of war and go backward and forward in time. Some characters’ fates are teased in advance, building suspense as we wait for events to play out. Other incidents are hinted at cryptically, only taking on shape and significance as the evening unspools before us onstage.

“I sometimes taste the envelope flaps, knowing that her tongue has been there.”

D’Ambrose’s understated performing style seems tailor-made for Stowell’s adaptation. Neither feels the need to get flashy and over-emote or throw themselves around the stage. They trust the strength and power of O’Brien’s story to speak for itself without the need for additional editorializing. D’Ambrose creates a host of characters so smoothly and easily you’re liable to forget how hard it is to pull off that trick. It’s just D’Ambrose, holding the stage for a full evening, with no one to fall back on and help him out if something goes wrong. It’s a remarkable feat of acting, in service of a remarkable story.

“Nobody believes that I was a soldier.”

Equally remarkable and harrowing are the true stories of women in combat that comprise the text of Helen Benedict’s Lonely Soldiers: Women At War In Iraq. Director Van has assembled a powerful ensemble of actors, many of them women of color, to embody these soldiers (Jamecia Bennett, Shana Berg, Dawn Brodey, Hope Cervantes, Tamara Clark, Meghan Kreidler, Rhianna Yazzie, and Santino Craven—who plays all the men, good and bad, in the lives of these women). While The Things They Carried reinforces that old saying that war is hell, Lonely Soldiers brings us the additional horror show that is simply seeking to serve your country in uniform if you are a woman. Your enemy is not just over there somewhere. A lot of the time, your enemy is also serving right alongside you. It’s still a man’s world in the armed forces, and a very unforgiving and brutal world it is.

“Claire, you don’t need to go to college. You can do God’s work better in the army.”

The problem here isn’t with the subject matter or with the delivery, it’s with the structure. Every one of the actors here performs her character’s traumatic journey with empathy and real power. But this ensemble of great actors isn’t allowed to perform with one another. In seeking to remain true to each woman’s individual story, the script has isolated each actress on stage with only a smattering of interaction with any of the other performers. One could argue that the intent of the text is to isolate the storytellers in the same way that these women were isolated and alone in their struggles in real life. But it also has the unfortunate, and I’m sure unintended, effect of putting the audience on countdown alert. “Wow, this is intense. Oh wait a minute, each and every one of these actors is going to have a tale of horror for us? OK, how many have talked so far? That means we have how many to go?” Rather than reeling us in, the play gives us a chance to check out on the uncomfortable subject matter, and stay checked out. Not only do all seven women have to get introduced and give us the beginning of their story, then all seven of them have a middle part to their story, and each of the seven will have an ending to wrap everything up. The script and the production do what they can to change things up (director Austene Van is particularly to be commended for working with her cast to find ways to keep the staging of the stories varied and active), but the fundamental underlying structure of the piece locks everyone in in a way that only allows them so much latitude in the storytelling.

“I was less scared of the mortar rounds than I was of the men who shared my food.”

The weird thing is, the resolutions of some of these stories point the way to a possible alternative staging. More than one of these real-life soldiers found themselves called to help their fellow soldiers in need, serving in support groups with organizations helping veterans to reintegrate into society and deal with their physical and psychological injuries. Situations like that seem an ideal way to bring all these disparate characters together in one place and allow them to interact while still being encouraged to tell their stories as part of the healing process. But, like the assembly of this wonderful group of performers, the script itself has a lot of theatrical potential that goes unrealized. While I can understand the urge to remain true to the original stories of these women, it’s live theater not a documentary. There are ways to honor the story without letting it hamstring all the potential that live performance, and these artists, can offer.

“It got so you knew something was gonna happen every day. You just didn’t know what.”

Both The Things They Carried and Lonely Soldiers: Women At War In Iraq also left me with a palpable feeling of “OK, now what?” It’s clear from these plays, and any number of stories on the news, that the veterans who fight our wars now need us to fight for them to get the help they need. History Theatre helpfully lists nearly a dozen local and national organizations in the program which help fill this need (it would be equally great if links were also readily available on the theater’s website). It was also heartening to see a table for the group Veterans For Peace out in the lobby on opening night. But I’d urge the theater to make just as much of a push for those organizations as they do for concessions in the lobby at intermission. Sure, I’d like to purchase the books these plays are based on, and it’s great you happen to have copies on sale just yards away from my theater seat. But you’ve reminded me there’s a pressing problem. What can I do now?

Since I’m writing on the internet, I’ll do this

Make The Connection (shared experience and support for veterans) – maketheconnection.net

The Resources Section of The Invisible War – www.notinvisible.org/resources