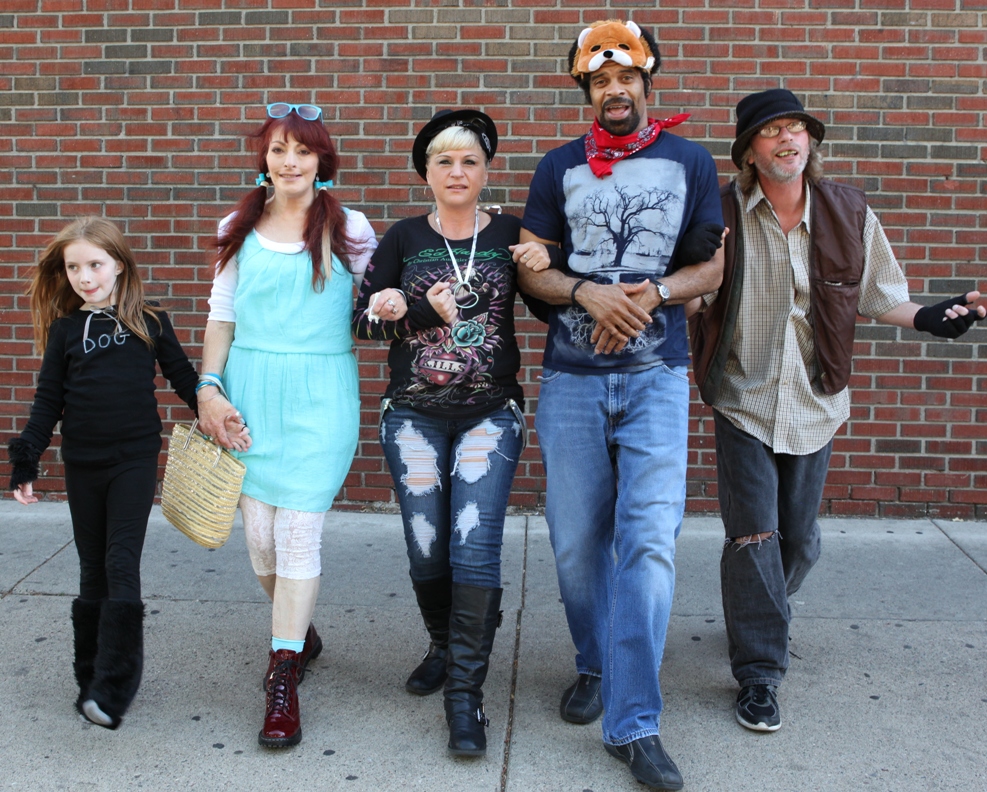 Dorothy definitely isn’t in Kansas anymore. In There’s No Place Like Home, the zAmya Theater Project‘s riff on the classic tale The Wizard of Oz (“or, brothers and sisters,” as one of the actors said, “The Wiz“), Dorothy (Caroline Manheimer) and her little dog Toto (Chloe Lamberson) find themselves suddenly homeless when family and house are swept away in a flood. Dorothy is now in the same situation as all the people on the street she’d earlier been avoiding.

The Narrator (Greg Tromiczak) outlines Dorothy’s journey as Lindy, the Great Witch of Good Intentions (Arminta Wilson) points our heroine in the direction of the Twin Cities to “follow the government plan” (instead of the yellow brick road). Along the way, she meets Scarecrow (Richard Brinda), a man struggling with mental illness, wheeling around a growing aluminum can collection. They also pick up runaway teen Rusty (Antonio Duke) and casino addict the Gambler (Corey Walton). They run afoul of not only bureaucracy but also the Bad Witch of the West Side (Marvin Howard), ready to lead them astray. Perseverance and the help of well-intentioned, overworked members of the network of social services make finding home again a possibility.

“Dealers and hippies and pimps, oh my!”

Just as zAmya isn’t your typical theater company, the performances don’t take place in a typical theater space. There’s No Place Like Home performs once a month in the basement at St. Stephen’s Human Services, a social services nonprofit that works with people experiencing homelessness. Their next performance is December 16th at 3:00 p.m. if you’re looking for a different kind of holiday entertainment. Of course, one should expect something off the beaten path, as both director Maren Ward and playwright Josef Evans are also key figures at avant-garde community-based Bedlam Theatre.

“I started moving from field to field—Springfield, Northfield, Richfield…”

ZAmya, a Sanskrit word for “justice,” was founded in 2004 as a way of creating dialogue between housed and homeless so that the communities could learn from each other. The majority of the cast members have experienced homelessness in their lives. In 2009 zAmya became a program of St. Stephen’s Human Services. The monthly “in house” productions of There’s No Place Like Home reflect a growing presence of zAmya as part of St. Stephen’s  community engagement work, seeking to involve the general public in their mission to end homelessness.

“Toward the mighty center of government and its steely gray heart.”

Are the production values top-notch? No, but that’s not the point. In fact, limited resources reinforce the real point, and this way the tech doesn’t get in the way of the story. There’s a certain “let’s put on a show” charm to clip lights with colored gels taped over them. The opening credits are a series of hand-written extra large Post-Its slapped on the wall in sequence. Scene changes are likewise indicated by hand-drawn pictures in magic marker carried across the stage by an actor. Sound cues emanate from from tiny computer speakers. In this environment, the more outrageous outfits of the witches really stand out in contrast.

Evans creates the scripts from material gleaned at workshops and storycircles sponsored by St. Stephen’s and the Salvation Army. Their newest work will premiere this spring. Until then, there will be monthly showings of There’s No Place Like Home. The big takeaway from all zAmya presentations is a better understanding of the obstacles the homeless face. Bottom line, you see homeless people as people, rather than a problem. Depending on your level of empathy and information around the subject, this can be a real eye-opener. The message isn’t heavy-handed, but it doesn’t need to be. Theater when it’s working properly always gives us a window into another world. This world just happens to be operating alongside the “normal” world, and it’s one we’ve gotten very good at ignoring.

In a strange way, the things you learn in the brief discussion after the performance can sometimes be almost more compelling than the show itself. For instance, I had no idea Minneapolis was at the five-year point in a ten-year plan to end homelessness. When it started, the economy hadn’t tanked yet. Now, for the first time in Minnesota history, the family shelters are all full, and they’ve had to rent out a hotel to house still more families. However, the progress made by the Minnesota program in many areas is considered a model for the nation, and one of the architects of the program has been tapped to go to Washington, D.C. to work on the homeless issue on a national level.

Someone in the audience asked if a homeless person would really be able to whip out a cell phone the way one of the characters in the play did. One of the formerly homeless actors said she got people coming up to her all the time, wondering how she could afford a cell phone if she was supposedly so poor she had to hold a cardboard sign on a street corner. The answer: pre-paid cell phones are dirt cheap these days, and some of the money she’d get from passersby each day would go to buying more minutes. The phone was essential for finding work, food, and a place to sleep. Public pay phones are as rare as unicorns these days.

“Home is not just a place where you eat and sleep.  Knowing your heart, knowing your courage, knowing your mind.  When you find these things within yourself, you’ll always find home.”

There’s No Place Like Home is an intriguing mix of the elements from the two modern film adaptations of the Oz story and the landscape of 21st century homelessness in Minnesota. The death of the Wicked Witch is a good example of the sense of humor at play here. The Witch still gets wet and melts, but the source of the water is Toto lifting her leg. The Lollipop Guild song from the Munchkins is transformed into “We represent the uninsured kids, the hungry kids, the desperate kids, here to welcome you to homeless land.” So, same bouncy tune, very different content.

The Gambler has a great moment of spoken word late in the action. The Good Witch belts out a fine rendition of the song “Believe” from The Wiz at the end. Too naive, wondered an audience member? Not really. The show is quite honest about the long lines, endless paperwork, and byzantine regulations that make it hard to attain even the basics. When you suddenly have nothing, getting anything at all can be a small miracle—and believing in yourself against all odds is sometimes the only thing that can get you through.

“Click your heels together three times and say, ‘There’s nothing like affordable housing.’  I was just being sarcastic.  I’ve been working at the shelter too long.”

If you haven’t seen zAmya in action, it’s worth the trek to St. Stephens to do so (it’s just a few blocks from where I live in downtown Minneapolis, but I never knew it was there until the night I saw the show). It’s not just entertaining theater, it’s important work. Maybe theater can’t change the world, but zAmya is certainly willing to try. Connecting storytellers and audience is the kind of thing live theater does best. As long as we all keep talking to each other, and realize this is a problem all of us share, there’s hope.