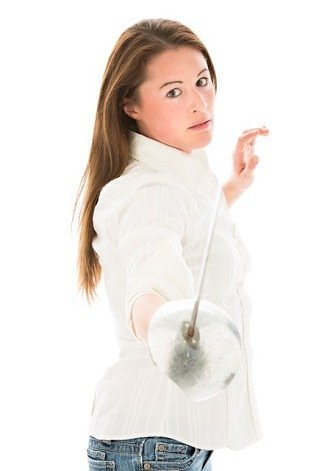 Let’s get this out of the way right up front. You should go see Theatre Unbound’s production of Hamlet because you should see Kathryn Fumie in the title role. Not because it’s a woman playing Hamlet. Because it’s a great actor playing Hamlet. Just like every Hamlet I’ve seen over the years, in good productions and bad, the problem with Hamlet is never the actor playing Hamlet. They always throw themselves into the role with an almost religious intensity. Fumie is no exception. Just like those before her and those who come after, the actor knows that this might be their one shot at an iconic theatrical role, and they don’t want to leave any chance (or risk) untaken. They leave it all on the stage floor. In Fumie’s case, her Hamlet almost feels like it’s in a completely different production, both for better and for worse. Better, because she’s better. Worse, because, well, I wish she had a better production supporting this performance.

“Keep you in the rear of your affection, out of the shot and danger of desire.”

It’s not the “all-female Shakespeare” conceit that’s the obstacle. Asking “why an all female cast?” is kind of insulting. No one asks “why an all-male cast?” There’s already a standard historical justification.  Theatre Unbound has already tackled The Tempest, and Julius Caesar this way (and gotten an Ivey Award for it). And it’s not a lesbian production (not that there’d be anything wrong with that). Hamlet and Claudius and Polonius and Laertes and Fortinbras and a dozen other male roles large and small are simply being acted by females here. You either get over it, or you don’t. That wasn’t my trouble.

“What should such fellows as I do, crawling between earth and heaven?”

It’s an enviable ensemble in many ways. If you’re going to do Hamlet with only eight performers, I’d put my money on a cast that includes actors like Muriel J. Bonertz (Claudius), Bethany Ford Binkley (Ophelia), Kathleen Hardy (Polonius), Nicole Joy Frethem (Laertes), and Laura Mahler (Horatio)—all actors I’ve seen and liked in countless other productions. Sometimes even in a wobbly production, they were the best thing in it and would keep me from giving up. [Gretchen Emo as Gertrude, and Zoa Green as the Troubadour are two performers who are new to me who round out the cast.] In addition to these primary roles, all the actors play multiple other characters (there’s even a group effort to embody the ghost of Hamlet’s father). Only Kathryn Fumie wears one hat in this production.

“Now could I drink hot blood.”

The multi-character approach is also not the problem here. In fact, it gives certain performers a real chance to shine and show great range. Bethany Ford Binkley in particular really leans into this challenge, giving us a powerful and heartbreaking Ophelia who seems like a real person and not just collateral damage in someone else’s story, as well as a comic turn as one of the ill-fated duo Rosencrantz and Guildenstern, and an imposing Fortinbras who needs to come in and restore order after the climactic bloodbath at the end of the play. (A quick tip of the cap to Lisa Conley’s costume design here—after a play all done in shades of white and silver, Fortinbras’ black trench coat visually signals a new era all by itself and reinforces Ford Binkley’s gravitas in the play’s closing moments.)

“It is not nor it cannot come to good.”

This issue here is the adaptation of the Shakespeare’s tragedy by director Lead Adcock-Starr. What she does is not without precedent. There’s a reason for it in the play itself.  And certainly, if one doesn’t want a five hour production of Hamlet, then cutting of the text is necessary. It’s the extra layer of artifice that Adcock-Starr has decided to lay on top of the play that bothers me. (Because let’s face it, you have to fix Hamlet. The play’s a mess, am I right? What was Shakespeare thinking not being more meta about the whole thing?) The production takes Hamlet’s (spoiler alert) final request to Horatio to live on and tell his story as its jumping off point in a way. Horatio becomes our narrator, introducing the play, the act, the scene, the characters—it’s exhausting. And unnecessary. The play already does most of that in the dialogue. Even without elaborate scenery, you’re covered. One has to give Laura Mahler credit, she tries her best to make this concept work. But for some reason she’s been instructed to have Horatio deliver all this in some kind of manic, falsely cheerful demeanor. You’re telling us about the death of your friend, his family and his girlfriend’s family—why are you presenting it as light-hearted hijinks?

“Like sweet bells jangled, out of tune and harsh.”

This approach also requires a lot more direct address to the audience than even this soliloquy-heavy script would otherwise need. It’s an extra burden for the actors, and an extra barrier for the audience, holding them at arm’s length by reminding them repeatedly that they’re watching a play rather than just letting them watch it, maybe even get to know and get wrapped up in the characters and the events which befall them. It makes it that much easier for most of the cast to fall into the trap of “performing” and “reciting” Shakespeare as opposed to just allowing the characters to speak words to one another in conversation. Other than Fumie’s performance as Hamlet, we didn’t get much of a break from this. When we did, those respites made the artifice elsewhere that much more apparent. Muriel J. Bonertz is at her very best as Claudius when she’s allowed to actually be a character in a scene—handling a furious Laertes and a protective Gertrude at the same time. You can sense her subtext in the way she carries herself and commands the stage—“Thank you, Gertrude, dear, I’ve got this. Let me handle him. Laertes, keep pointing that sword at me, not my wife. Now let’s talk.” It made me long for a production where she’d be allowed to do her best work all the time.

“Oh my offense is rank.  It smells to heaven.”

Kathryn Fumie as Hamlet really saves the day in this regard. No matter how complex or challenging the speech or the scene, she inhabits it fully. You don’t ever feel like she’s saying lines. She’s expressing herself as the character. That sounds like it should be easy, like it should be the baseline for any performance, but with Shakespeare, it’s doubly difficult. In this production, more so. Which just makes me admire Fumie’s performance that much more. The language flows out of her naturally and makes Hamlet a living, breathing human being. She has her triumphs and disappointments. She has her jokes and flirtations. She makes everyone interacting with her onstage better. (And some of them are already pretty good to begin with.) When she and Nicole Joy Frethem as Laertes get into the final sword fight, the two of them really let loose. Adcock-Starr wisely gives them the full range of the James Sewell Tek Box stage in which to cross blades, and Annie Enneking’s spirited fight choreography makes good use of all that space to play. Fumie is really wonderful as Hamlet. I just wish the production matched her efforts.

“There is nothing either good or bad, but thinking makes it so.”

Even if you’ve seen other Hamlets, you should see Fumie’s Hamlet. She gives you new insights into a story you thought you knew already. If you haven’t seen Hamlet, this production’s a good basic introduction. It’s not perfect, but it’s got some strong performances in it throughout and it’s worth a look. I may quarrel with the concept but I can’t quarrel with the casting.