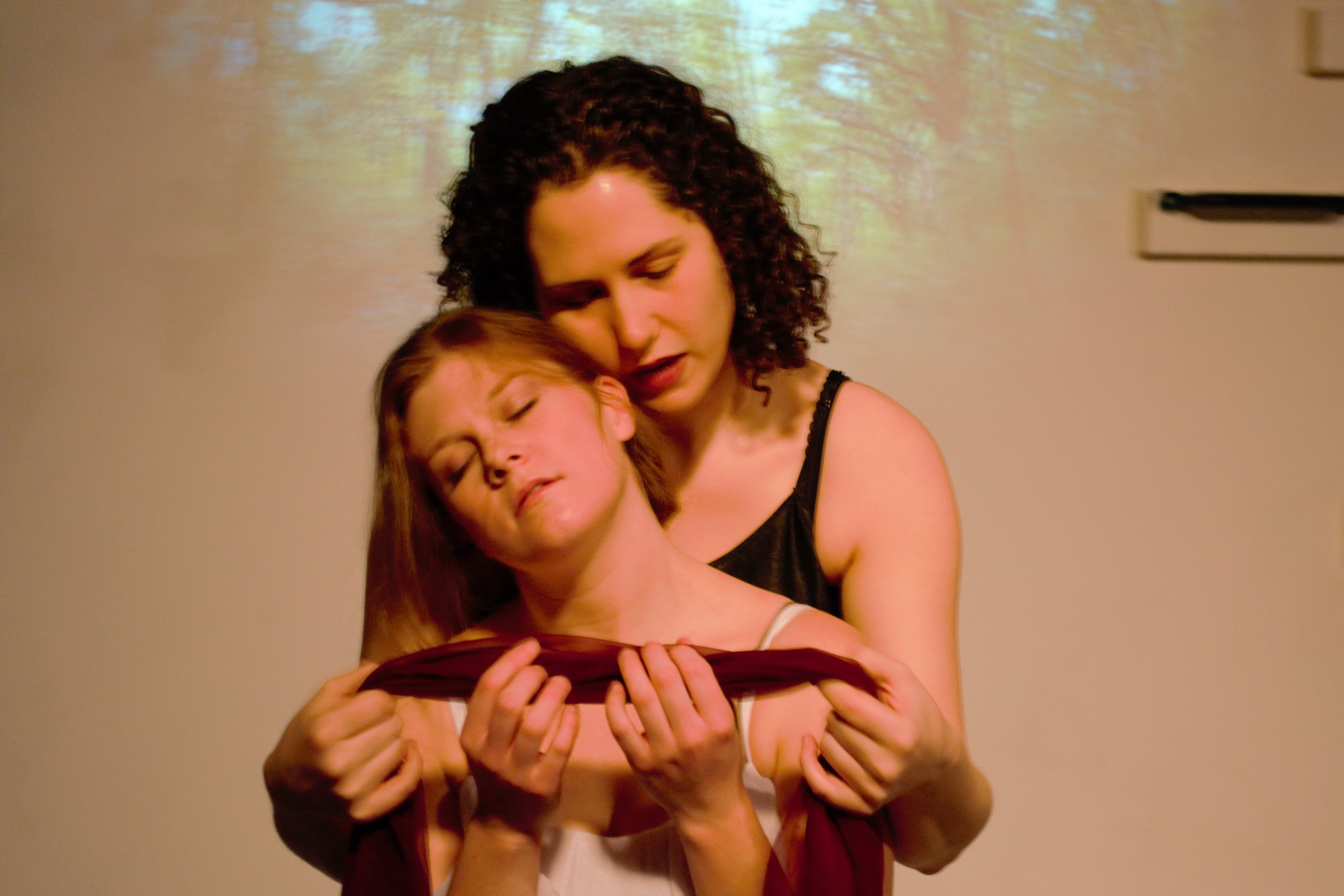 Morgan le Faye (Emily Knotek, behind) seduces Nimue (Tamara Koltes, front) into participating in Merlin's demise in Broceliande: The Death of Merlin, the first half of Six Elements Theatre's Tales from Camelot; photo by Teresa Townsend

Jenna Papke’s Six Elements Theatre and phillip andrew bennett low’s ongoing exploration of the Arthurian legends of England are such a perfect fit in retrospect I’m surprised a production like Tales From Camelot didn’t happen sooner. As it is, this new iteration of Tales From Camelot brings out the best in both. Tucked away in a gallery space in the art-saturated Northrup King Building in Northeast Minneapolis is a delightfully intimate evening with larger-than-life human beings.

The first half of the evening, Broceliande, or the Death of Merlin, is exactly what the title tells you. When the play opens, Merlin (Jordan Klitzke) is already dead, his remains stuffed inside a towering tree (here represented, cleverly, by the enormous gray cement pillar that is planted for purely architectural reasons right in the midst of the playing space). But a curious knight, Bagdemagus (Zac Delventhal), has entered the forest of Broceliande, “the wood beneath the world,” and in coming upon Merlin’s former young lover Nimue (Tamra Koltes), unleashes the final memories of a dying Merlin from a nearby stone. And what a trippy final journey it is, courtesy of another of Merlin’s former lovers and current mortal enemies, the lovely and devious Morgan le Faye (Emily Knotek).

“I knew a thing my demon father could never know I knew.”

When I first saw this piece back in 2005, as part of low’s Maximum Verbosity show in the Minnesota Fringe Festival, Camelot Is Crumbling, I recall it being just as nightmarish, but making a lot less sense. All the elements were there, but they were a little unfocused. (And it wasn’t part of the reconfigured remount of Camelot Is Crumbling in the 2011 Fringe.) Here almost nine years later, the script hasn’t lost any of its hallucinatory quality or verbal gymnastics which made it so compelling before. But the writing is a lot sharper, with the additional advantage of the quality of the acting here as well as Jenna Papke’s astute direction. Both director and actors revel in the language, but don’t get lost in it for its own sake (which is a trap into which it’s easy to fall with a lot of low’s storytelling—it’s a verbal feast).  Merlin’s horrific downward spiral remains as otherworldly and demonic as always, but the audience can easily follow every step down the path of no return along with him. Which turns out to actually make it scarier – and more fun. Live accompaniment on cello and percussion from music director and composer Joseph Finstrom adds to the ominous atmosphere of the tale.

“If somebody wants me dead, I reckon there are easier ways to do it.”

The second half of the evening is a revisiting of low’s other Arthurian Fringe tribute, the one-man show The Rise of General Arthur (first seen back in 2009). Here again, time has been the script’s friend. Both low’s writing and performance are an improvement on the version of five years ago (and I thought that show was among his strongest to date at the time). Here as in the 2009 version, Arthur and Merlin are supporting players in the larger story of the knight Pellinore, off to seek his own fortune and reputation in the aftermath of his father’s death. In low’s retelling of the story, however, Pellinore joins the armed forces and is shipped off to a modern day war in Iraq.

“It is only we, the ignorant, can hope.”

This isn’t a heavy-handed political allegory, though. low’s slyer than that. Just when you think you might have figured out some pointed political commentary at a particular world leader or military campaign, the Arthurian elements of the story take over completely again and you can’t quite hit the target your mind was aiming at. But the familiar totems are there—oil, blood, sand, violence, the downfall of an empire foretold (though just whose empire and exactly when the fall will come, well, that’s open to interpretation).

“My idea of hell would be if you could follow me around and talk to me like this all the time.”

Also open to interpretation: the recurrence of dreams as a channel for men of war to grapple with their uneasy consciences is fascinating and, again, completely slippery and elusive. Even the overall plot of The Rise of General Arthur itself seems to be only a segment of a much longer journey across a much bigger canvas, and yet it doesn’t frustrate the viewer. Nothing feels incomplete, though much is unresolved, and still more is unexplained. Pellinore’s encounters with his mother, as well as Merlin, Arthur, the traitorous soldier Lot, and the elusive questing beast, all have their own point in and of themselves, while still adding up to something larger. (In a fun nod to the interconnectedness of low’s meditations on Arthur, the character of the knight Bagdemagus from Broceliande appears in Rise as a driver to bring Pellinore to see Merlin.) It’s a dense piece of writing, leavened with a lot of humor, and a very rewarding experience for the listener.

“My heart —an organ with the fluids that the Druids understood.”

Evidence of low’s spoken word background pops up throughout the evening—whether it be in Merlin and Morgan la Fey’s rhythmic and rhyming incantations, or the music stand holding low’s script in the second half—which he regularly and uncharacteristically departs from and ignores for long stretches of time. But always the words and the story remain the foundation of the evening, to which both pieces repeatedly return. Modern nods like the present day costume design by Lucas Skjaret for the characters of Brocliande, Pedro Juan Fonseca’s ongoing video background of forests both green and barren, or the country/folk music covers of old “boys going off to war” songs from World Wars gone by interspersed through the stories of Rise, help reinforce the language of low’s scripts making these ancient tales accessible for today’s theatergoers.

“In the end there was no sign that our nation had ever existed.”

If you want a little something different in your theater diet and don’t feel like waiting until August for the Minnesota Fringe Festival to arrive, Six Elements Theatre’s production of Tales From Camelot should provide what you’re yearning for. They’re not just reheated leftovers, they’re newly fine-tuned scripts that have the benefit of new life in a new environment. Everyone involved has taken this second chance in hand to make everything that much better. So whether you’ve seen low’s treatment of these legends before, or would be catching them for the first time, it’s well worth the visit to this new Camelot.