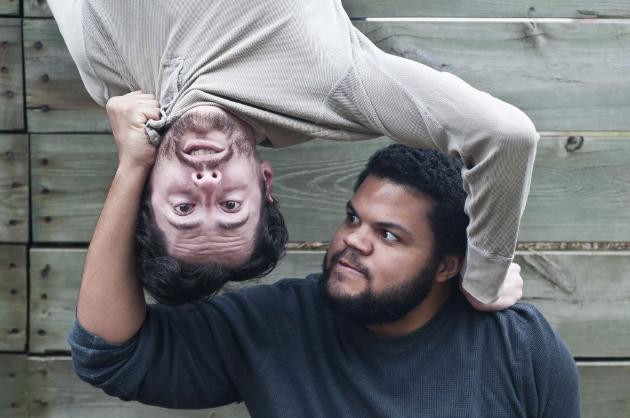 You wouldn’t think that a story of two inept petty thieves cycling in and out of the prison system with no hope for a better future would be a ripe breeding ground for comedy, but that’s Jon Klein’s T Bone N Weasel for you. It finds comedy in racism, illiteracy, recidivism, homelessness, religion, bankruptcy, political opportunism, guns, mental illness, and prostitution, just to name a few. It’s such an amusing, genial little travelogue, it’s sort of like Of Mice and Men, without all that pesky tragedy to bring you down.

“Only steal cars you know how to drive.”

Because, despite the constant threat of violence, nobody dies. T Bone (Theo Langason) and Weasel (Mark Benzel) steal a car, then try to hold up a liquor store. Except their car breaks down and the cash register won’t open. They unload the car for some cash, then try to get rid of the gun. Only the gun winds up in the hands of a homeless crazy street preacher, who then holds them up for a offering to the church. The fortunes of these two low-rent criminals keep rising and falling in ever more peculiar ways. The hope for an honest, steady job is both a dream and a thing of dread for these guys. Every other character in the story—male, female, old, young, rich, poor, sane or crazy—is played by Ben Tallen, who seems to be having a ball, but also must be completely exhausted.

“That’s dumber than p*ssing on an electric fence.”

Amber Bjork, Theatre Pro Rata’s leading lady in many a play I’ve enjoyed in recent years, has taken the director’s chair this time. Bjork does a great job of keeping the episodic story moving, and keeping the relationship between T Bone and Weasel front and center. Their unlikely friendship is the emotional thread that ties the whole story together. Bjork wisely keeps the tone of the piece steady throughout, which is tough because the script is not without its faults. The whole tale lives just this side of actual reality. Enough reality seeps in around the edges to keep the tension up most of the time, so the laughter comes as a welcome relief—and thus the comedy is earned. For instance, any of Tallen’s cast of supporting characters could go so far over the top as to take over the narrative and derail the whole thing. Bjork and Tallen work together to keep the production from getting out of balance.

“You’d probably hoped it’d bite my pecker off so you could use it for soup.”

The design also keeps things moving along at just the pace a script like this requires. Zach Morgan’s set, Julia Carlis’ lighting, Lydia Bolder’s props, Jacob M. Davis’ sound, and Mandi Johnson’s costumes (particularly for multi-character man Tallen) allow the actors under Bjork’s direction to nimbly and speedily bounce from one scene to the next.  The comic timing often depends on this.

“Eating a double cheeseburger is like staring in the face of God.”

There’s also a fair bit of deliberate low-tech whimsy going on here. They fly in a pair of evergreen tree air fresheners to hover above the steering wheel and seat that’s supposed to represent a car. They lower in quite obviously fake birds for another sequence. The scene titles they project on the abandoned billboard which serves as the back wall of the set are almost a fourth character, since they elicit quite a few laughs as well. For instance, when T Bone laments about their luck, saying “We’re due for a break,” the billboard flashes the word “Intermission.” The whole production hums along like a well-oiled, and very entertaining, machine.

In fact, the only real trouble I have with the production is the script itself.  At a certain point in the second act, the story starts to lap itself, not just recycling past characters (albeit sometimes inventively), but also moments we’ve already experienced with these characters.  When the play reaches this tipping point, we stop learning anything new about the characters, especially our two main characters, and that’s a shame.

Because Theo Langason as T Bone, for all his cynicism, is a remarkably bright character. His theological arguments with the prison priest start to get very interesting, but then the scene is too quickly over and the script never returns to that territory. Another similar instance is when T Bone starts to tangle with a local politician, tying to ferret out his true motives. Again, there are some intriguing dynamics going on here, but the play just scratches the surface and moves on. Yet these sorts of moments are where T Bone’s world view seems to be rooted. The actor and the character could go further, but the writer doesn’t take them there.

In a similar vein, Mark Benzel’s Weasel is fascinating precisely because he is so very trusting, simple and uncalculating. People take advantage of him, but just as often his good nature lands him in the middle of a positive turn in his fortunes. Weasel’s good luck tends to rub off on T Bone as well. The way these two begin to influence each other is one of the most interesting parts of the play, but the play only allows it to go so far.

“I’ll check your stools in the morning—maybe we’ll get lucky.”

The two men almost stumble out of a life of crime and into a “normal” life with actual promise, just as easily as they stumbled into crime in the first place. Watching them struggle, and still succeed, with that new life would have been interesting and, frankly, something new I haven’t seen very often on stage. But again, the play decides not to go there, and instead sticks with reliable jokes it’s told before.

Still, T Bone N Weasel is a smarter than average comedy, exploring volatile issues with a light touch, and welcome good humor. It’s a genuinely enjoyable evening. It’s another fine Theatre Pro Rata production of a play that should count itself lucky that it fell into their hands. Recommended.