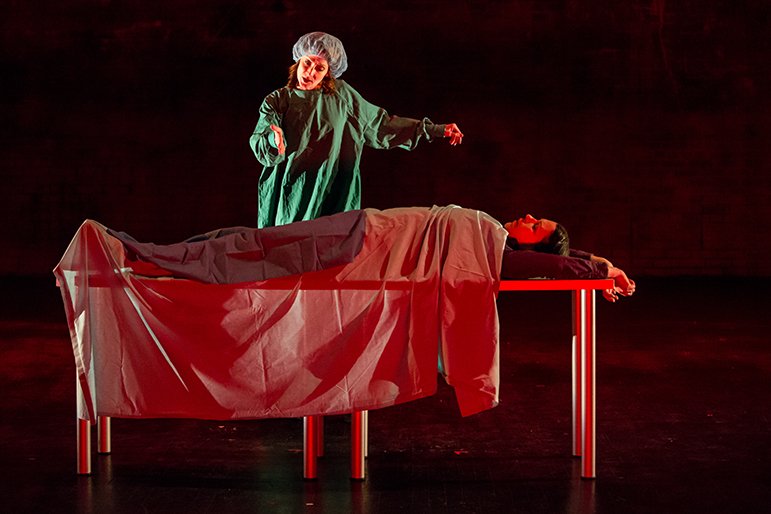 Edward Linder and Dawn Krosnowski as a couple of twisted doctors in Hardcover Theater's production of The Surgeon in the Twin Cities Horror Festival; photo courtesy of TCHF

Writer/director Steve Schroer and Hardcover Theater’s offering in the Twin Cities Horror Festival, The Surgeon, does such a good job of lulling you into a false sense of security that you could be forgiven for wondering if anything odd or horrifying was ever going to happen.

“For all your amputation fetish needs!”

Surgeon David (Edward Linder) and his doctor wife Joan (Ariel Leaf) are going through some marital difficulties when an old friend from medical school, Adriana (Dawn Krosnowski), turns up on staff at the same hospital where they both work. No, it’s not a love triangle. (Well, not the kind you’re expecting, anyway.) Krosnowski is so good on stage at seeming normal and then turning out to be completely evil and crazy that I may never trust her again.

“If you pay me extra, I’ll give you a used bandage.”

Adriana specializes in treating psychiatric patients who feel that a certain part of their body is a foreign entity. For some like geeky awkward Wayne (Cody Stewart), it’s a hand; for others like prostitute Bobbi (Lana Rosario), it’s an arm. This unwanted body part makes them feel freakish, and gives them no peace. Naturally they want the offending appendage removed. But doctors aren’t supposed to remove otherwise perfectly healthy limbs. As the ominous chorus (Sabreena Cadreva and Philip D. Henry) looks on, providing running commentary in their surgical scrubs, caps and face masks, Adriana enlists a reluctant David as the surgeon to remove these limbs. Blackmails him, in fact. A story with a surgeon who’s become a slave to a psychiatrist’s amputation fetish can’t possibly end well, and of course, it doesn’t.

If you can, try and see The Surgeon before you see Dangerous Productions’ Frankenstein. There’s enough realistic looking amputations going on in the latter that The Surgeon’s narrative technique of describing and implying and offering verbal sound effects in words seems a bit feeble in comparison. Of course, since The Surgeon is also going for a dark sense of humor throughout, the silliness of the climactic bloodbath at the end is entirely intentional. There’s enough stage blood to go around in the remainder of the festival, I’m sure. Not every act in the Horror Festival needs to serve up the same level of simulated gore. In fact, it’s a bit of a relief that they don’t. Count The Surgeon in this more benign horror category. It’s gruesome, but still ultimately ludicrous enough that the audience gets to laugh with the storytellers, rather than at them.