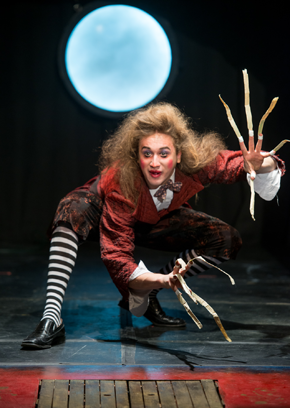 I must admit with some embarrassment that even though Open Eye Figure Theatre is practically in my neighborhood, and though I have seen a number of shows in that space in recent years, I have never seen an actual Open Eye production in their theater. Thankfully, Strumply Peter just helped me change all that. Though there were plenty of children in the audience, this adult audience member was also thoroughly entertained.

“What a marvelous array of misbehavior!”

Strumply Peter is inspired by the illustrated tales for children that 18th century German physician Heinrich Hoffmann penned. Hoffmann was disappointed in the lack of quality writing aimed at his children, so he decided to write some children’s stories of his own. They turned out to be quite popular and I can see why. They’re awfully peculiar, even gruesome, yet strangely moral.

Open Eye posted some samples of Hoffmann’s original stories on the lobby wall. A girl who plays with matches ends up burning herself to death while the cats who tried to warn her look on in horror. A man with enormous scissors swoops in and cuts the thumbs off a little boy who won’t stop sucking on his thumb. A little girl prone to eavesdropping and gossip is spirited away to have her ears and mouth pierced to have them all hung with padlocks that will keep her from snooping and sniping in the future. A boy who refuses to eat his soup whithers away and dies in just a matter of days. A sloppy girl has pigs invited to her tea party to displace her human friends—and she’s even messier than the pigs.

“He will be milk and she’ll be flour. We’ll have cake in half an hour!”

So that’s the kind of source material writers Josef Evans and Michael Sommers (also the director) are adapting to the stage. They take as their title character one of Hoffman’s most popular creations, Struwwelpeter or Shockheaded Peter—here Strumply Peter. Strumply Peter (Noah Sommers Haas) never combs his enormous mop of hair, and never cuts his fingernails—now grown to obscene lengths that remind one of Edward Scissorhands or Freddy Krueger. He comes to the home of naughty children at night and spirits them away. The Lamenting Mother (Keith Lester) sets out a lump of coal to signal Strumply Peter to come to her home. Her two puppet children are then off to a menacing nighttime world of stories (also designed by Michael Sommers) that nonetheless seems to delight them.

“Why are your eyeballs in Dizzy’s fishbowl?”

Strumply Peter’s partners in crime are Crybaby (Tara Loeper) and Messy Mary (Liz Schachterle). Crybaby has glasses with big googly eyes on springs that end up bobbling into unusual situations when she cries. Messy Mary lives up to her name in both dress and habits. She picks a rather spectacular booger out of her nose and eats it, just as an example.

“Take this nasty soup away! I won’t eat any soup today!”

In addition to designing the costumes that bring all these characters to colorful macabre life, Claudia Haas is also part of the band – on the slide trombone. Yes, Strumply Peter is a musical, shot through with all manner of catchy ditties composed by Eric Jensen (who also mans the piano). Laura Abend on the trumpet rounds out the trio of musicians. Jensen’s melodies really stick in your head. Even as I write this, I can’t think of the name Strumply Peter without singing it. Hoffmann’s original stories were all composed in rhyming couplets, so the musical treatment seems like a perfect fit for the storytelling. The cast are all game musical performers—Loeper as Crybaby has a particularly beautiful voice (when she’s not busy crying, of course).

Michael Sommers has designed some delightfully ramshackle and ominous settings for Strumply Peter. There’s rickety old buildings on wheels, shuttled around the stage by the cast. There’s a talking storm cloud and a threatening looking grinding machine that turns the puppet children into the dough for a cake. The wasting away of the boy who refuses his soup is the most comical and spectacular of all—a series of ever skinnier looking cardboard cutouts finally give way to an elongated stick figure made of colorful plastic bands.

“Up the stairs he will creep, and take the children while they sleep.”

Noah Sommers Haas is great at Strumply Peter. He not only works those bizarre fingernails for all they’re worth, he’s fairly gymnastic in his ability to pop up from his trap door in the floor and work the stage. He’s a vaguely threatening but not flat-out terrifying presence—just enough to unsettle the children while sparing them nightmares. It helps that the script keeps the dark sense of humor foremost in the telling. The play also doesn’t belabor any of its messages, nor are they exclusively for the children in the audience; the parents get their admonishments, too. Strumply Peter is just gross and musical and colorful and creepy enough to slip in a message or two while it pretends to be nothing but entertainment. There’s also a couple of turns of phrase that kids might not catch but could well leave adults gasping (as I did). Clever stuff indeed.

“Hold still. This won’t hurt at all.”

Now that I’ve had a taste of what Open Eye serves up on a regular basis, I’m very much looking forward to seeing more. Meanwhile, you should see Strumply Peter—and bring kids if you’ve got ‘em. It’s a lot of fun for anyone with an appreciation for a twisted sense of humor.