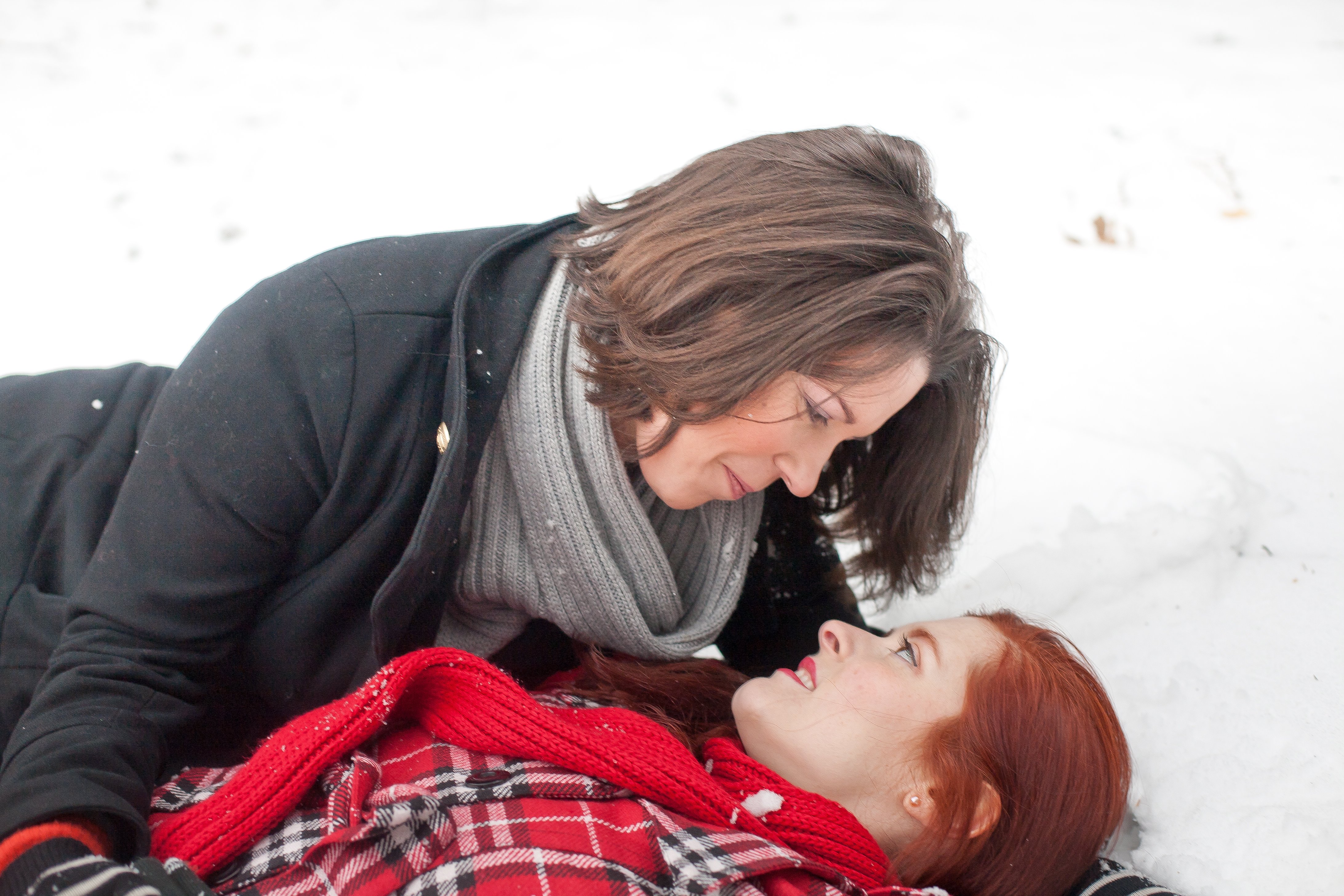 Let’s get this out of the way right up front—you should go see Stop Kiss.  Diana Son’s play is funny, romantic and sweet—this, despite the fact that half of the play is dealing with the aftermath of a violent act that puts one character in the hospital. The chief strengths of the production are the performances of and the chemistry between the two leads—Ariel Leaf as Callie and Katie Starks as Sara. Director Ben Layne gets some great performances out of these ladies, as well as the rest of the cast. Watching these two women meet, get to know each other, and fall in love is a real treat.

“Lately I’ve been feeling like there’s something worth winning.”

Stop Kiss is notable not just for the treatment of its subject matter, but also its structure. The play alternates between scenes in the past, starting when Callie and Sara first meet, and scenes in the present, with the investigation into the attack and time in the hospital focused on Sara’s recovery from that attack.

“I’m not laughing at you. I’m laughing around you.”

“The best thing to do is just walk on by.”

Callie meets Sara when she agrees to take care of Sara’s cat for her. Callie’s living situation in New York allows for a cat, Sara’s does not.  Sara has moved to New York from St. Louis, having won a very competitive teaching fellowship, to teach third graders in a tough neighborhood. Sara loves her job. Living in New York, different and challenging as it is, never gets Sara down. Callie, on the other hand, just stumbled into her job as a traffic reporter. She doesn’t really like it, but doesn’t seem to have the courage to leave and try for something new. She can’t even figure out what that something new might be. Sara intrigues, challenges and infuriates Callie. Son’s script lets us get to know the characters as they get to know each other. The conversations are fun and freewheeling, drawing us all closer together.

“What are people going to think if you walk in wearing my clothes?”

Sara and Callie each have a man in their past who keeps trying to be part of their present. Callie has a low-key “friends with benefits” arrangement with George (Andy Chambers). Sara broke things off with Peter (Michael Ooms) back in St. Louis in order to spread her wings in New York. Either of these characters could be a thankless role, but in the way they’re written and in the way Chambers and Ooms perform them, these two men make it clear the kind of life Callie or Sara could have had, and the other life they choose for themselves instead.

“Why would you say to someone, ‘I will stay with you even if I outgrow you.’”

There are no villains here (except the attacker who we never meet). Stop Kiss is largely about people trying to find the courage to live the way they want to live, to be their best selves, rather than take the easy way out.  Sometimes they fall short, but because they keep trying, you can’t help rooting for them. And on each of these two tracks of time, the story winds up in a very hopeful place, with Callie and Sara making a choice to be together.  Stop Kiss ends, as it should, on a kiss. (And hey, let that kiss play out a little longer. What’s your hurry? We waited the whole story for that one.)

“I hope you feel bitter and cone bark soon.”

Stop Kiss also nimbly navigates the territory between gay and straight ways of living—and shows the barriers between them to be largely artificial, living in the minds of the people involved. Stop Kiss could be simplistic or heavy-handed, but chooses not to be. It’s that rare play that gives the audience something complicated to think about rather than trying to spoon feed them all the answers. It both allows us to watch the two women slowly fall in love, and also see the reactions of people outside that relationship.

“They say Dylan Thomas died waiting for a drink there.”

Detective Cole (Joel Raney) investigates the attack, and every time you think the play is going to paint him as one of the bad guys, he’s revealed just to be a man looking for the truth. In some cases, it’s a truth people like Callie aren’t ready to face yet. So he has to keep coming back until he gets the answers he needs. He needs to know what happened, and why it happened, so he can catch the guy who did it.

Linda Sue Anderson plays a pair of guardian angels—Mrs. Winsley, the woman who called the police and broke up the attack on Callie and Sara, and a nurse in the hospital helping with Sara’s recovery. In both instances, these women assume the relationship between Callie and Sara has existed longer than it actually has. But they both see how deep the bond between Callie and Sara runs. In both cases, they see it before even Callie does. In their own way, they both guide Callie closer to Sara rather than let her slip away.

“They look at me, your parents, like I’m some dirty old man.”

George’s non-reaction to Callie being attracted to a woman is the quiet sort of “no big deal” acceptance many people long for but few people get. He reacts to a friend being happy, or being in danger, not to the reason the friend ends up in those places.

“You think that smell is related to food?”

Peter is less understanding, but more because he himself just doesn’t understand. He can’t talk to Sara, so he has to deal with Callie.  But he can’t help wishing Sara had stayed in St. Louis, and relative safety, rather than move to the strange new dangers of New York.

“Now that I’ve got the fellowship, I’ve got every god to pay.”

Fortune’s Fool Theatre has also given these characters a fully realized world to live in. Ursula K. Bowden’s impressive set design is largely devoted to Callie’s apartment but also has a dedicated section for the hospital, obscured by a large white curtain when necessary. The curtain is lit by Julia Carlis to be a continuation of Callie’s home when it needs to be, but the presence of the curtain keeps the fact of Callie and Sara’s future always visible in their past. Callie’s apartment is also artfully decorated (and cluttered, in character) by prop designer Corinna Knepper Troth.

The one place the production stumbles a bit is the same place the script stumbles—getting from one scene to another. Diana Son does a lot of TV and film writing now, and watching Stop Kiss you can see how well she is suited for it. The strength of the script, the hopping back and forth in time, is also its greatest challenge. Because you have to account for that shift somehow. It can’t happen with a simple cut the way it does on the large or small screen.  So how to you indicate it?

Fortune’s Fool Theatre chooses to put the weight of the time changes on the costumes. Jenna Graupmann has gathered together a fine costume design for all the characters, but has outfitted Callie and Sara particularly well. The clothes fit them well, but also seem lived in. The costumes definitely add to the reality of the story. However, as a result, Leaf and Starks seem to be almost constantly changing clothes between scenes. I’m sure the pace backstage is furious, but even so there’s a lot of marking time in the audience. Thankfully, Scot Moore’s sound design helps bridge a lot of these divides with fun and interesting musical choices. But sometimes it feels like the play is about costume changes rather than the characters.

“Finally I told her. I answered.”

Oddly enough, some of the solution to that issue may already be in place. The supporting characters in the ensemble are frequently the ones taking care of the onstage shifts of scene. Occasionally this is even done in character, as with the nurse and the hospital setting. What if it was more deliberate? Even in half light, we know who these people are. It’s interesting, for example, that the actor playing Sara’s former love Peter is primarily the one to set up the final scene—the park with a bench and a lamp post, where Callie and Sara will kiss for the first time.  What if those emblematic people—nurse, detective, lover, boyfriend—weren’t in a hurry to shift things around and then wait for the scene to begin? What if those waiting periods were interstitial scenes of their own somehow? I’m sure the costume pieces are already flying as fast as they can. Since it’s too late to make any changes there, maybe the pacing can be adjusted in other ways to keep the story flowing rather than starting and stopping.

Really, though, with a story this compelling, and performances this winning, pacing issues are a small price to pay. I saw the production of Stop Kiss that Eye of the Storm Theater did back when Son’s script was still a new play in the late 1990s. We’ve waited a long time for its return, so I’m glad to see Stop Kiss back on stage again here in the Twin Cities. Whether you’ve seen it before, or like me haven’t seen it in a long time, Stop Kiss is the good kind of storytelling that helps make the winter a little more bearable. The happiness inside this production holds the promise of spring.