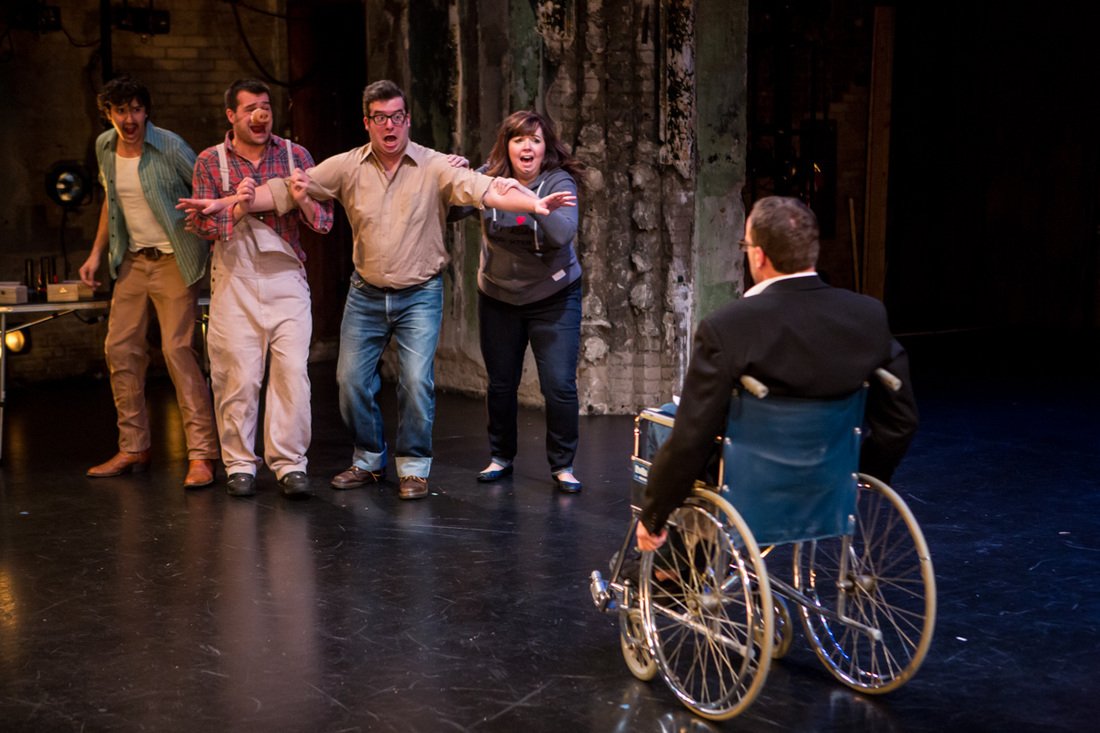 In Spooky Town, four grown orphans return to the site of their former orphanage to spend the night. If they survive until morning, facing their greatest fear along the way, they will receive one million dollars. The lawyer, a single mother (Debra Berger), needs the money for her adopted daughter’s medical bills. The teacher (Ryan Robert Nelson) needs the money to support his drug habit. The cop (Andy Kraft) needs the money to pay off just a fraction of the lawsuits being hurled at him for his less than racially sensitive performance on the job.

“The only thing she’s guilty of is thinking she’ll survive.”

And Piggie (Josh Carson), well, he’s just never received an invitation to anything before, and the thought of getting out of the house and meeting other people – who also happen to be old friends he grew up with – seems like a great idea. He’s called Piggie because his parents couldn’t afford a real nose when the boy lost his in an accident. So he ended up with a pig snout on his face. After which he was so ugly his parents promptly dumped him off at the orphanage.

“Under your seat you will find diapers. You may want to put them on for you will surely soil yourself.”

The odds of living until morning and getting the million dollars? Not good. The former director of the orphanage (Brad Erickson) has orchestrated the affair to prey upon the weaknesses of his former charges. He is aided by the narrator (Mike Fotis in a hilariously bad blond wig and equally hilarious super-extended fake arms). The narrator’s obsession with Fig Newtons can possibly be explained by the supposed collaboration between Ferrari McSpeedy and Nabisco Co.’s Division of Arts and Culture to bring you Spooky Town.

“I’m going to go get some Fig Newtons while I force you to listen to some more backstory.”

The orphans’ fears are personified by a faceless man in a head to toe spandex body suit (Joe Bozic) – no, really. The color of the spandex changes depending on the substance of the fear being addressed. There may also be the odd accessory like a wig or a rapier. And what villainous costume would be complete without a terrifying fanny pack (black, of course), full of nefarious plastic baggies of things like peanut dust and rabies?

Yeah, all of this is completely ridiculous, but that’s the point. Ferrari McSpeedy is indulging in the old “spend the night in a haunted house/who will survive to see the sunrise?” scenario and making fun of it at the same time. The characters are so entertaining that we naturally get drawn into the story and care about the outcome, even as the plot points of the story just keep growing exponentially more ludicrous as the danger increases.

“Perhaps nothing else you hear tonight will be a terrifying as this tiny bit of racism.”

Honestly, the thing’s just fun. The cast are all having fun right along with the audience in some kind of giddy feedback loop. I also have to say this is the most subdued I’ve ever seen Josh Carson in any role. Piggie is so unlike any other character I’ve seen him play, I almost didn’t recognize the guy (and not because of the pig nose).

“Sorry, I tend to ask questions that advance the plot when I’m nervous.”

If you want to indulge in an antic bit of goofiness with a high body count, Spooky Town is your play. Both Spooky Town and the Twin Cities Horror Festival run through November 9, 2013.