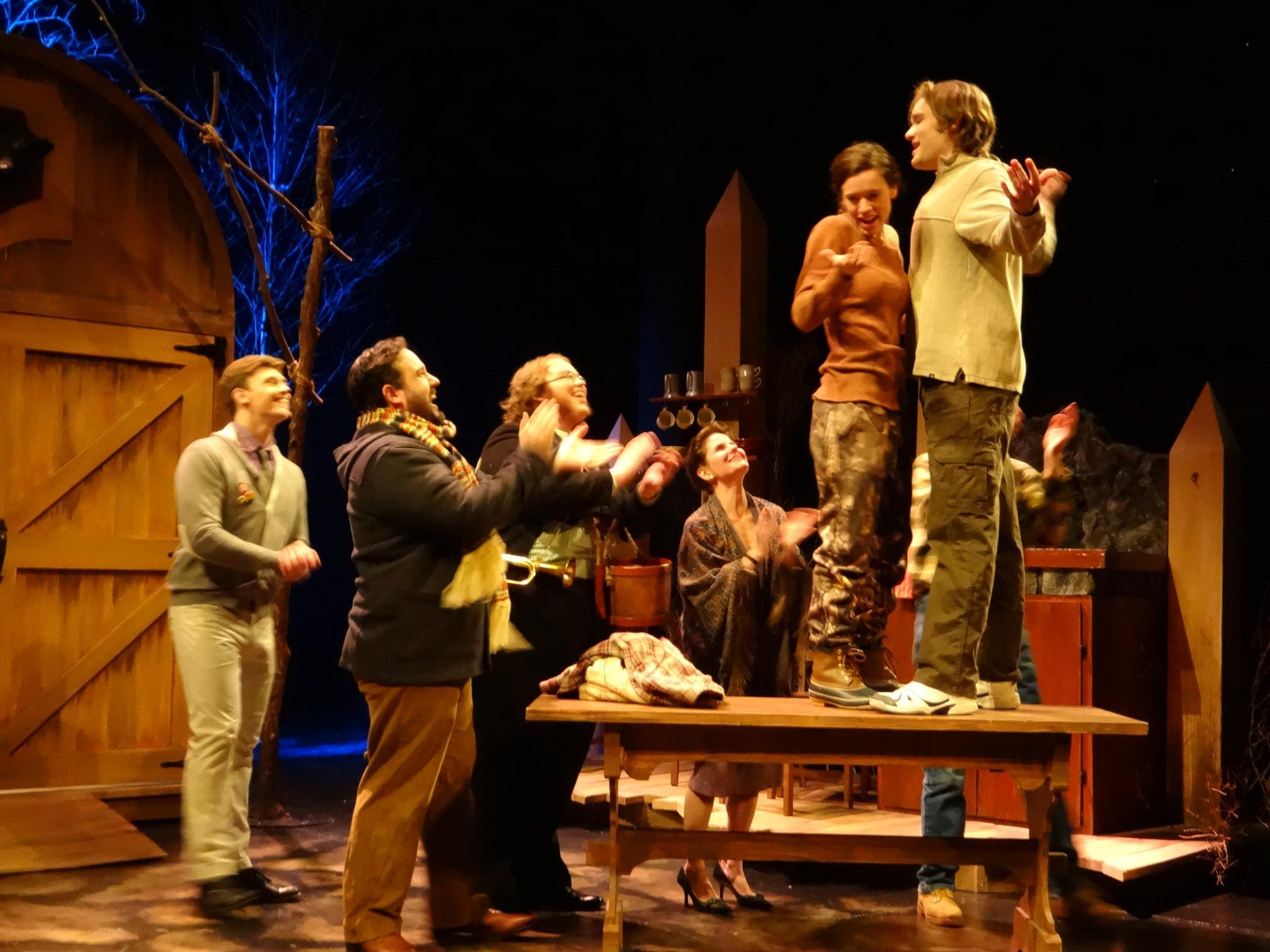 Bree Schmidt, Luverne Seifert, and Alexander Stene in Theatre Novi Most's Something About A Bear

We’re all sick of snow. However, when it snows inside the theater, not just onstage, but in the audience, I’ve got to admit that’s kind of magical. Those kind of magical things happen a lot in Theatre Novi Most’s production of Something About a Bear, a whimsical romantic comedy and fairy tale for adults and children alike.

“It’s like ‘The Princess and The Frog’ but in a very backwards, macabre kind of way.”

Novi Most and the University of Minnesota’s Theatre Arts & Dance department have assembled a team of both student and professional actors as well as a student design team to bring to life this world premiere of Constance Congdon’s adaptation of Russian playwright Evgeny Shvartz’s work. Transplanted from Russia to the little town of Embarrass, Minnesota, the story is both modern and timeless at the same time.

Something About A Bear begins with a young man (Brant Miller) who claims to be a wizard. He charms a young waitress named Krystal (Laura D. Hickey) and casts a spell that whisks them away from her humdrum everyday life working for Lorna (Pauline Johnson) at the local diner. Though they marry, they have no children. One day, a bear is caught in a trap and killed, and the wizard finds her now orphaned bear cub hiding nearby. The wizard decides they should raise the bear cub as their surrogate son, but before he can sell his wife on the idea of a pet, the wizard’s sneeze unleashes a wish that turns the bear cub into a real boy (with a furry tale, and bear-like habits).

The bear boy (Alexander Stene) quickly grows into a young man. There is one small drawback to his heritage, however. If the bear boy falls in love and kisses a young lady, he will turn back into a bear—and very likely eat the object of his affection. No sooner does he learn this than who should appear but a beautiful Princess (Bree Schmidt). They take one look at each other and—uh oh…

The princess is not alone, of course. Her tyrannical and buffoonish father the King (Luverne Seifert) is not far behind. And with him comes an entourage: a couple of (courtly, not religious) ministers (Jared Garth Zeigler and CJ Holmes); a court musician (Jacob Mobley); an executioner (Rex Davenport, complete with his own ax and portable chopping block); a lady in waiting named Carlena (Annie Enneking); and two junior ladies-in-waiting (Haley Joy Carneol and Catherine Wadsworth Noble) who seem as though they’d be more comfortable in reality television than a palace entourage.

“Why do we attach ourselves to people if they break our hearts?”

When the bear must spurn the princess for the sake of everyone’s safety, nobody takes the heartbreak well. The princess goes into hiding, masquerading as a boy and working as a hunter’s apprentice at the local hunting lodge. But of course, everyone ends up at the lodge in short order, and romantic hijinks with magical complications ensue. One of the owners of the lodge, Carl (Charles Campbell), has a romantic past of his own with Carlena. And if the other innkeeper Hiram (Joseph Pyfferoen) can’t keep that other trigger-happy hunter’s apprentice Whitman (Jack Dhein) in line, somebody might get hurt.

“Ah, so this is the Lodge of Low Expectations!”

Co-directors Lisa Channer and Vladimir Rovinsky have given Congdon’s script a fine first outing.  The tone is light and whimsical throughout, and when the production is focusing on the silly things love can make a person do, the production and the play are on their most solid footing. Congdon’s script is packed both with humor and truly lovely turns of phrase, practically poetic. The love—both parental and romantic—shines through constantly, and the language, though heightened, never seems too overdone. You still believe the words coming out of their mouths, even as you despair that you might never be that funny or eloquent yourself in real life.

“Now I’m just like one of the animals that killed my mother.”

Something About a Bear also looks and sounds fantastic. Patrick Koalska’s set design, Cole Bylander’s costumes, Sarah Brandner’s lights, and Devin Nee’s sound all combine to create a world right out of a storybook that still doesn’t stray too far from the present day. An added bonus is all the original music composed and performed by Linda Breitag and Johanna Gorman-Baer, with an assist on vocals and musical instruments from over a half-dozen members of the cast. The songs are both lively and haunting by turns, with Congdon’s sense of humor and poetry easily translated into the lyrics as well.

“Is there something worse than death?”
“A piano recital.”

Honestly, though, it’s the little things that stick with me. The wizard puts on a pair of spectacles to read a book, and we realize that time has passed, his son is becoming a man. Carl and Carlena climb on top of a table to dance. The bear and the princess disguised as a boy manage to finally get a quiet moment alone and their connection is just as strong as before. The ungainly way the bear ambles around in his human body, never quite getting the hang of how to walk like a man. The snow that falls on the audience.

“Can it be that we are alone? Can a broken heart find a new home?”

As much as I appreciate the good work of the big, sprawling ensemble, I found myself wishing for a few less of them, and a little more breathing room for the main story—the wizard and his waitress, their son the bear, and the woman he loves. The king’s royal retinue were funny and folksy, but they had little or nothing to do with the outcome of the central romance and magical spells to be undone. Ditto the men who ran the local hunting lodge. The King is the Princess’s father, of course, and a natural foil for the young lovers—plus he’s a sly commentary on the excesses of the ruling class and unchecked absolute power. We need him around (though if you’re not careful, the man won’t just chew the scenery, he’ll steal the whole show). The more I wanted to spend time with the two pairs of lovers, the more the king’s bevy of servants felt like so much human clutter (entertaining clutter, but…)

Also, when you’ve got a girl dressed as a boy, and the boy who loves her finds himself unaccountably attracted to “him”…well, that’s Shakespearean As You Like It/Twelfth Night territory just waiting to be exploited. Here, it isn’t. In fact, the play as a whole is surprisingly heteronormative. A couple of the king’s same-sex servants walk off into the sunset together at the end, so credit where it’s due. But if you’re gonna do the cross-dressing thing, then go there. Both of the bear’s human parents assume it’s going to be a girl he falls in love with, and say so outright. Then there’s a chance to further explore the notion of what does it mean to be a man, what does it mean to be human, to be in love—regardless of who you fall in love with. After all, we’re already talking cross-species romance and borderline bestiality here, if you want to get technical. What’s a little gender confusion gonna hurt (particularly when the audience knows it’s really a male/female pairing and everyone’s disguises are destined to come off before the final curtain)? You can have your family-friendly cake and eat it, too. It just seems like an opportunity both for comedy and humanity that was missed.

“It makes me want to give up my art forever and make something with my hands.”

Still, it’s not often you get to see a story where you see both the strong bonds of love between parent and child as well as two strangers who meet and fall in love. Such tales normally exist in isolation from one another. But to see the lengths to which the wizard will go for the people he loves, to see the transformations that occur, the spells that are made and broken by the power of love and belief extended from one human being to another…it’s all quite moving. The stakes are high but the rewards are great. It’s not a spoiler alert to say that in a story like this love is bound to conquer all. But since we live in a world where so often love is not enough, it’s heartening to watch a story that runs counter to that, one in which we can actually believe. We’re ready to be disappointed, so it’s nice to be proved wrong.

If you just want to revel in the kind of giddiness that love of all stripes can conjure in a person, then Something About a Bear is just the show for you. Come dressed for snow, and expect a surprise or two. Very highly recommended.