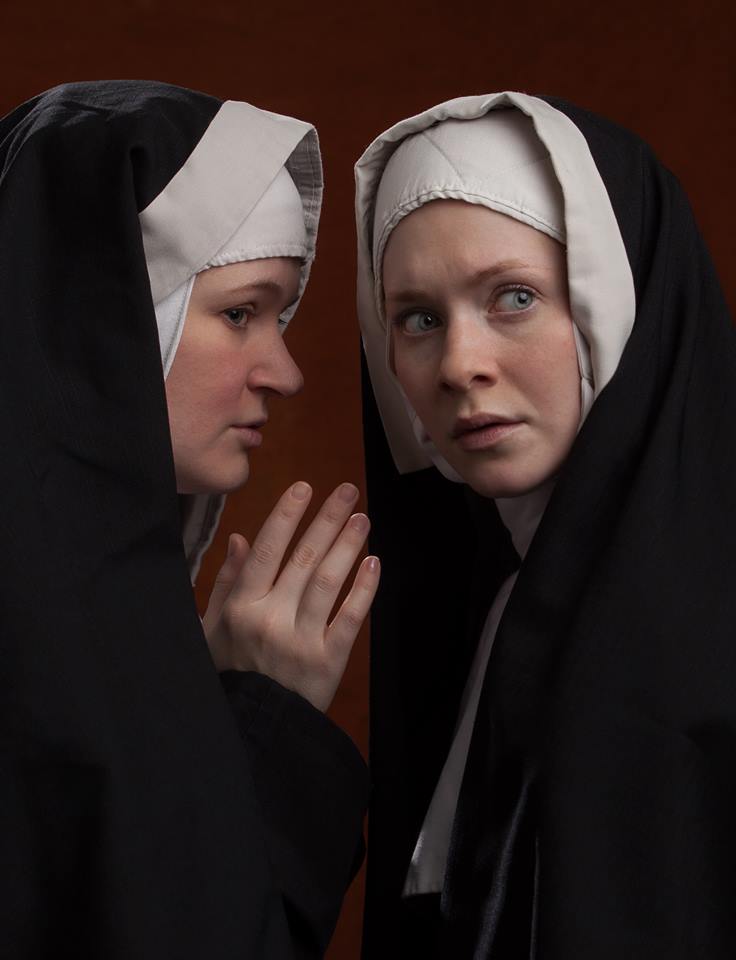 Isabel Nelson and her company Transatlantic Love Affair won a couple of Ivey Awards for their unique style of physical theater, forged in initial productions at the Minnesota Fringe Festival and expanded and improved through Illusion Theater’s annual Lights Up series. Theatre Unbound won an Ivey Award for one of their signature all-female productions of Shakespeare (in that instance, Julius Caesar). So it was with a lot of excitement that I learned of Theatre Unbound’s plans to collaborate with Isabel Nelson on a new ensemble-created work to close out their current season. The end result of that collaboration, Silkworms (a nun play), is truly the best of both worlds.

“I shall not fear darkness as long as I have you.”

Theatre Unbound’s company playwright and Executive Director Anne Bertram has lent her considerable wordsmithing talents to the project. Her spare and surgical way with words is evident each time the characters speak. Silkworms (a nun play) is listed as being created by Isabel Nelson, Anne Bertram, and the performing ensemble. Nelson is listed as Creator/Director, Bertram as Collaborating Playwright, and the ensemble of actresses consists of Unbound Core Company Members Delta Rae Giordano and Laura Wiebers, as well as Amber Bjork, Kayla Dvorak Feld, Cynthia Horbeck, Taous Claire Khazem, and Peyton McCandless. What they have created together is remarkable.

“I think she actually might be praying for an earthquake.”

Silkworms (a nun play) takes place in 17th Century Italy and is inspired by the true story of a group of Dominican nuns who destroyed their convent in the hopes of returning home. Convents back then weren’t always just a refuge for the devout. They were also used as a place to ship off young women who were considered trouble to their families—hanging out with the wrong people, men in particular, or just having too much of a mind and will of their own running counter to their parents’ wishes.  Think of it like the girls’ version of being shipped off to military academy, only there it’s a Mother Superior instead of a Master Sergeant.

“You shouldn’t put faith in anything human.”

The population of this particular convent is a mix. There’s the Prioress (Taous Claire Khazem) in charge of the place, looking out for her female charges while trying to navigate the treacherous waters of church politics ruled over by men—unseen, but all powerful, handing down punishment by edict, even able to withhold basics like their food supply. Caterina (Delta Rae Giordano) keeps the convent running efficiently, and has picked up a young sidekick in Felicita (Peyton McCandless), who eagerly follows her every move. Teresa (Laura Wiebers) is devoted both to the convent and the Prioress, caring for their leader whenever she falls ill.

“When you’re poor, you learn how to pace yourself.”

Giovana (Cynthia Hornbeck) is one of those headstrong young women a convent is supposed to straighten out, but even here her strong will bristles against the slights of the patriarchy running things from beyond the convent walls. Giovana’s younger sister Oliva (Kayla Dvorak Feld) has followed her older sister into the convent, not wanting to be separated from her. It gives Giovana another headache, but also someone else to fight for when things go wrong.

“My sister is hungry.”

Eufrasia (Amber Bjork) keeps a watchful eye on all of this, gauging which way the wind is blowing before taking sides, and using her keen intellect to make the case to the Prioress when more radical actions must be taken. Each and every one of these women have hard decisions and sacrifices that need to be made before the story draws to a close.

“I will walk in my house with a perfect heart.”

Because this is Theatre Unbound, we get a graceful and symbolic set by Ursula K. Bowden, just as spare and lean as Bertram’s text.Multiple white strands of what could be the silken thread the sisters harvest to help pay for the convent’s expenses hang in waves to represent a bit of ceiling, then descend to form a back wall with a window tucked in the design. Depending on how Julia Carlis’ lights catch white strands, and what color they throw on them, we get different cues as to the environment. The cast all have simple habits in a neutral color as the uniform of their order.

“What if something really bad happened?”

Other than these very basic design elements, the acting ensemble creates everything else: props and even most of the furniture, through their movements. There may be benches for the evening meal, but no table.  Pews in the chapel are altogether invisible, marked only by the motion of the actresses shimmying sideways in and out of them at prayer time. This physical theater work is the hallmark of Nelson’s direction.  Normally her actors do without even set, lights, or a stick of furniture. In Silkworms (a nun play), however, the cast isn’t focused on becoming doors or trees or animals or the falling rain. Here, the heart of the play revolves around rituals.

“And no one here who thinks it’s fun to make me cry.”

We see the repeated daily rituals of these women, and become accustomed to them quickly. Any change in these rituals later on becomes an event. If the Prioress fails to appear at bedtime to give the nuns a final blessing before sleep, something is wrong. The women wash their hands and face simply each day in an unseen bucket of cold water each has in their cell. It is the harsh and sudden intake of breath, and the swiftness with which they dip their hands in and out of the bucket, that lets us know the water is cold. Each kisses the floor when they enter and leave their own cell, grateful to God for a place to sleep, however simple. Being invited into someone else’s cell is an uncommon and radical act. The lighting of the candles, the scrubbing of the floors, the serving of food, dipping a finger in Holy Water when entering or leaving the chapel. The smallest changes in these rituals have real impact.

“So many things in life are so sweet.”

There is humor here, also love and devotion both human and divine. Wills are tested, limits pushed, and hearts broken, but ultimately the women find a way to break free and survive. Their future is uncertain, but they can no longer be dragged back into the past. It’s the simplicity of the whole enterprise, and the attention to the finest of details, that makes Silkworms (a nun play) so thrilling. Direction, writing, design and acting all come together to present a remarkable new ensemble-created work. Nelson and Theatre Unbound bring their best into this collaboration, and end up with something even better than they could have created alone. Silkworms (a nun play) gets back to the very roots of live theater, and reminds us again just how compelling and powerful it can be.