On December 20, LaTasha Powell, Regina Carter, J. DaVon Nolen, Lataijah Powell, Zoe Hollomon, Candis Alaine Hill, Princess Nelson, and Divine Islam gathered at the Capri Theatre, telling their stories one by one, focusing on food and their life experiences. They appeared in Soul Food Monologues, a project of Appetite for Change in North Minneapolis.

Appetite for Change is a nonprofit food justice organization that teaches individuals, families, and communities how to grow, cook and eat healthy foods. The goals of the organization are to build strong communities around food justice, improve community health, help the local economy, and to raise awareness on how food can be a tool to create health, wealth, and change.

LaTasha Powell has one child and was born and raised on the north side of Minneapolis. Powell is co-founder and program manager at Appetite for Change. She opened with one of her favorite sayings: “We cannot do what we do not know.” In Powell’s monologue, she talked about the health disparities in the black community, how she learned how to read food labels, how she changed her diet by cutting out pork and beef, and adding more fruits and vegetables to her diet. She also talked about body types and how African Americans view their bodies differently than European Americans. 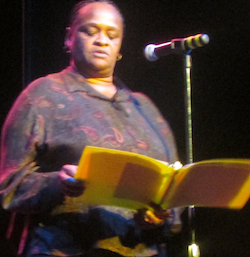 Regina Carter was born in a small town in Mississippi. When she was three years old, her father died in a car accident, and her mother and her father’s mother raised her. Her grandmother taught her how to garden at a very early age. Carter’s grandmother taught her how to love and respect the dirt. Carter talked about working on her family’s farm when she was a young girl, where she learned how to grow potatoes, tomatoes, field peas, cucumbers, and greens. Her mother and grandmother also taught her how to cook soul food. In 1985 Carter came to Minnesota to visit her sister and never returned to Mississippi. Now Carter works with Community Supported Agriculture (CSA) an organization that supports local food growers, which she said is the perfect job for her, as she gets to do something she loves and get paid for it.

J. DaVon Nolen was born and raised on the north side of Minneapolis. Nolen talked about going through physical and emotional abuse and the death of her sister, who died when she was just 15 years old from a brain tumor. Nolen reminisced about the smells that met her at the door when she came home from school when she was a young girl: kale greens, peaches, cinnamon, and nutmeg. She also talked about how her mother’s food represented love and healing and kept their family together over Sunday dinners for many years until her sister and grandmother passed away. Nolen said that she will not just plant food but also plant seeds of change and awakening, she will show people how to cook so that we can heal themselves.

Lataijah Powell also was born and raised on the north side of Minneapolis. Powell started off thanking her mother for life. Her mother, LaTasha Powell, was on the stage watching her daughter with a smile on her face. Lataijah Powell told the audience how her mother modeled the correct behavior for her to follow. Powell is a junior at Patrick Henry High School. Powell has worked with Appetite for Change since 2012 and is very interested in working in the criminal justice system and organizing in her community.

Jayanthi Kyle, who sings around the Twin Cities, sang two songs for a musical interlude. “High, Low, Middle” is a song about privilege and “No More” is a song about being liberated. In between the songs, she talked about the importance of embracing who you are.

Zoe Hollomon is the project manager of the Northside Fresh Corners Initiative. She grew up in Buffalo, New York and after college moved to Harlem where she taught economics and entrepreneurship in the inner city. Hollomon told the audience that, while she was living in Harlem, her mother was really sick and had been for twenty years without anyone knowing that she needed a liver transplant. After receiving her new liver, her mother started to rethink life and how she spent her time. She decided to start a community garden and spent most of her time working in her garden and reprioritizing her life. Hollomon said that food is the magnificent tool that should be used for positive personal and community transformation. 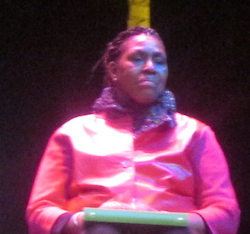 Candis Alaine Hill was born and raised in Fresno, California, where her father was a dairy farmer and her mother was a nurse. Her mother moved to Berkeley, California with her and one of her brothers, leaving her father, two brothers and sister in Fresno. Hill talked about the problems that plague the earth such as the damaged ozone layer, traffic, the closing of schools, and foreclosures. As a young girl, Hill picked cotton and grapes. That was when she realized the importance of an education. While living in Berkeley in the 70s, she became a Black Panther, which laid the foundation of organizing around the food justice system in North Minneapolis. 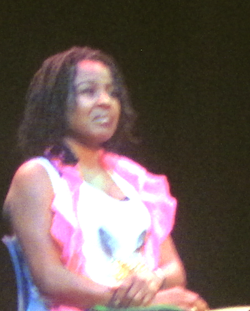 Princess Nelson, a co-founder of Appetite for Change, recalled her childhood singing and dancing for family members and getting paid for doing it. She also shared with the audience that she was often challenged by the adults in her family to read big words out of the dictionary and she did. She said that when she was a child, the adults watched her and she watched them. She watched her aunts stay in abusive relations and her mother and grandmother be the backbones in her family. She shared about having a miscarriage and becoming a young mom and moving to Minneapolis. She talked about teaching her sons about the street life and how she lost her son in the streets and how she reconnected with her daughter, her other son and their friends by teaching them to cook healthy and delicious meals. 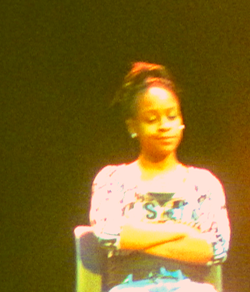 Divine Islam walked the audience through a day of her life, explaining how she observed her peers thinking about partying and falling victim to materialism. She noticed a boy walking down the street with hot Cheetos and thought about what other snacks could be in his hands. She pointed out that a healthy body makes a healthy mind. Islam said that she is grateful to have Youth Farm in her life because now she knows how to eat healthy. She also talked about seeing a young lady around her age with two children, about her identity as a young black lady, about the large achievement gap between African Americans and European Americans, and about the police brutality she often sees in her community. In finishing her monologue, she posed several questions to the audience, such as: Is change possible? Is it possible for the community to see the value of community gardens? Is it possible for young ladies to respect themselves and be comfortable being themselves? Is it possible for us to change our priorities? Is it possible for obesity to end? Is it possible for black people to come together?

I really enjoyed the Soul Food Monologues. Each lady brought her own perspective about food and the memories they have attached to food. A common theme was that food is essential to everyone’s life events — whether we are celebrating, grieving, or meeting, food is usually around, so we need to be conscious of the type of food we have around.