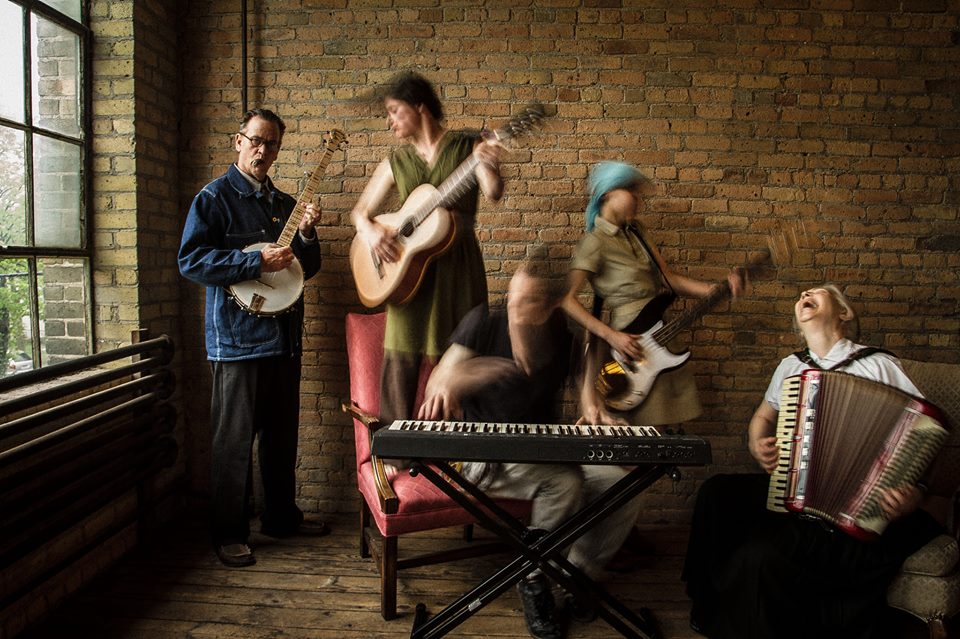 I’m glad that Theatre Novi Most‘s latest production Rehearsing Failure is part of the new ARTshare program at the Southern Theater. Since I’m a member, I can go back whenever I like and see it again.  And I’d like to, very much. This production bears repeated viewing, as there’s a whole lot going on in any given moment.

“I am the beam that holds up your house.”

When the performance of Rehearsing Failure was over, my theatergoing companion turned to me and asked, “How do you write about something like that?” Excellent question. Because you can’t describe a production like Rehearsing Failure literally. Even though it’s only about an hour long, the thing is so rich and visual and non-linear and strange and sexy that it’s like trying to explain a joke and killing the humor.

“I survived not one war but many, so don’t try to get inside my head.”

Rehearsing Failure gives you Barbra Berlovitz letting her long gray hair down and dancing. There’s also Annie Enneking rocking out on electric guitar. Sara Richardson slowly crosses and uncrosses her legs and slinks around on top of the theater seats while smoking a cigarette. And it’s a toss-up in the sexiest moment category for Billy Mullaney whether it’s him cracking a bullwhip, or carting around and putting his mouth on what I’m fast appreciating as that most phallic of musical instruments, the bassoon; or planting a kiss on Pearce Bunting in order to gain an advantage in their fight to lay hands on a book full of ideas.

“Repeat the gesture but take the emotion out of it.”

Rehearsing Failure also puts its seductive moves on the Southern Theater itself. Samantha Johns’ set design places the audience on one side of what’s normally the stage area, then sets up a little proscenium across from them. But from this vantage point the audience also gets to see beyond the majestic old stone proscenium of the Southern towering above them to the left, and then the climbing bank of theater seats—all dark wood and red velvet—to the right, all the way up to the light and sound booth which for one vivid scene glows bright blue (kudos to Heidi Eckwall’s amazing lighting design throughout). It’s almost like theater porn. The actors caress those seats with their words, their music, their film projections and their bodies. I haven’t seen the whole of a theatrical space embraced this enthusiastically in a long while.

“What do you feel when a great man lets you down?

I’ve been avoiding using the name Brecht for four paragraphs because, oops, there, it happened, your eyes just glazed over. No, no, I don’t blame you. Theater about theater people creating theater is the kind of thing that normally makes my teeth itch. Even the title is asking for it. But writer Cory Hinkle, director Lisa Channer and the full Novi Most creative team get the balance right—people first, theater second.  Rehearsing Failure is primarily about the guts and emotions of these characters, and that’s what reels you in. It’s not in that dry documentary style of biographical theater that presents you with Important People and Important Events and then hopes that you care about them because, you know, they’re Important. It’s because the Novi Most crew gets us to care about them as people first that we come to understand just how huge they are.

“I used to steal things from you, not the other way around.”

Elisabeth Hauptmann (Annie Enneking) was a German playwright and translator. She collaborated for decades with Brecht and has been credited with writing up to 80% of The Three Penny Opera (some would argue she deserves credit for the whole thing). Ruth Berlau (Sara Richardson) was a Danish director, writer, actor, journalist and founder of the Workers Theatre of Denmark. She, too, collaborated for decades with Brecht, helping write Caucasian Chalk Circle, Mother Courage, and Life of Galileo.  Helene Weigel (Barbra Berlovitz) was a renowned German actress and artistic director of the Berliner Ensemble. She was the first Mother Courage. Elisabeth and Ruth were Brecht’s lovers, Helene was his wife. Brecht was great about including women in the collaborative process of theater and putting them in positions of power. He was, however, lousy about sharing credit and paying people for their contributions to the finished product. He was also lousy at being faithful to anything other than his own sexual appetites. You’ve probably never heard of these women. I hadn’t, I’m chagrined to say. Rehearsing Failure aims to help change all that.

“How can we ever find the truth when the truth gets buried in history?”

In one of those juxtapositions that proves history often has a sense of humor, in 1947, having fled from Germany to exile in California, along with his collaborators, Bertolt Brecht (Pearce Bunting) was mounting the premiere of the play Life of Galileo, and at the same time was getting ready to testify before Joseph McCarthy’s House Un-American Activities Committee (HUAC). In Rehearsing Failure, Hauptmann, Berlau, and Weigel were not only actively collaborating with Brecht on the Galileo piece, they were also keeping house with him, advising and needling him about the upcoming HUAC testimony. All of them are haunted in one form or another by Brecht’s younger self (Billy Mullaney). All of which sounds a lot more straightforward and mundane than it plays out on stage.

“You see your older self and it disgusts you.”

For instance, each of the characters introduces themselves as they appear, saying their introductory sentences as if they were reading their own stage directions from the script, giving us the smallest of snippets of their backstory. The vast majority of what we learn about these people we learn about them on the fly as they sometimes skillfully, sometimes awkwardly, dance around one another and the act of creating something with meaning to it. Even all of that sounds a bit twee, but I promise you it works. I am probably the least receptive audience to a theatrical gambit like this, and yet they completely won me over. So completely in fact that my standard objections to the kind of theater they were presenting didn’t even occur to me until long after the show was over and I was sitting down to try and write this review. “Wait a minute.  I should hate this.  Why don’t I hate this?”

“I can no longer take myself seriously.”

The answer is the fascinating characters of Helene and Ruth and Elisabeth and the compelling women who bring them to life for us. For example, there is a wonderfully chaotic scene of a rehearsal of Galileo in which a hapless young actor, Kevin (also Mullaney), must try and synthesize the feedback of all four of the other artists, spread out through the dark red theater seats. Brecht doesn’t just let the women share their opinions. They offer them unbidden without fear of contradiction. They all have equal input. It’s great fun watching all these minds at work, but it’s equally fun to listen to them get in jabs at one another, under the cloak of the creative process and the Galileo story. Sometimes they don’t even know that in discussing the Galileo story with Kevin, they are commenting on themselves and their own actions outside the theater.

“The things we had to take.”

Another key element that makes Rehearsing Failure work is the music, composed by Annie Enneking and Dan Dukich (who also performs at the keyboard, not just for songs, but also providing an underlying soundtrack to the evening). A high point is the three women enthusiastically letting loose on a rock anthem called “Effigy”—Elisabeth on lead electric guitar, Helene on bass, and Ruth on percussion, playing drumsticks on an overturned metal trashcan. Flipping the real life script, the two Brechts find themselves playing roadie and backup singer to the trio of females for a change. There’s also a plaintive opening number as the group heads into exile, and a great bit of payoff later in the action when a poem Elisabeth mentions translating early on turns out to be the basis for a later ballad the three women sing to … who, is a good question. There are all sorts of levels of meaning carrying on underneath the words and music, and the women sing together beautifully.

“When a woman gives you her all, leave her. That’s as far as she can go.”

Director Lisa Channer’s staging contains all sorts of playful nods to Brecht’s style (although as I type that, I’m wondering anymore if his name should be the label on it). The mini-proscenium hems in the home setting on either side in such a way that  the audience is always seeing only part of the picture for scenes taking place there. Often actors will sit in a way that only their arms or legs are showing, their faces out of sight.  It makes you watch and listen in a different way, which is of course the point.

“At the border we found ourselves…”

I was relieved that the play makes no excuses for Brecht’s behavior, personal or artistic. In many ways, the guy’s an unrepentant jerk. At first I wondered, hey, why does he get an older and a younger self on stage, not the women? Then I realized, anyone of these women (the characters, and even more so the actresses) could be their own play. Each of them is worth two of him any day. Berlovitz, Enneking or Richardson alone would be worth the price of admission. All three of them together in one play? It’s almost not fair.