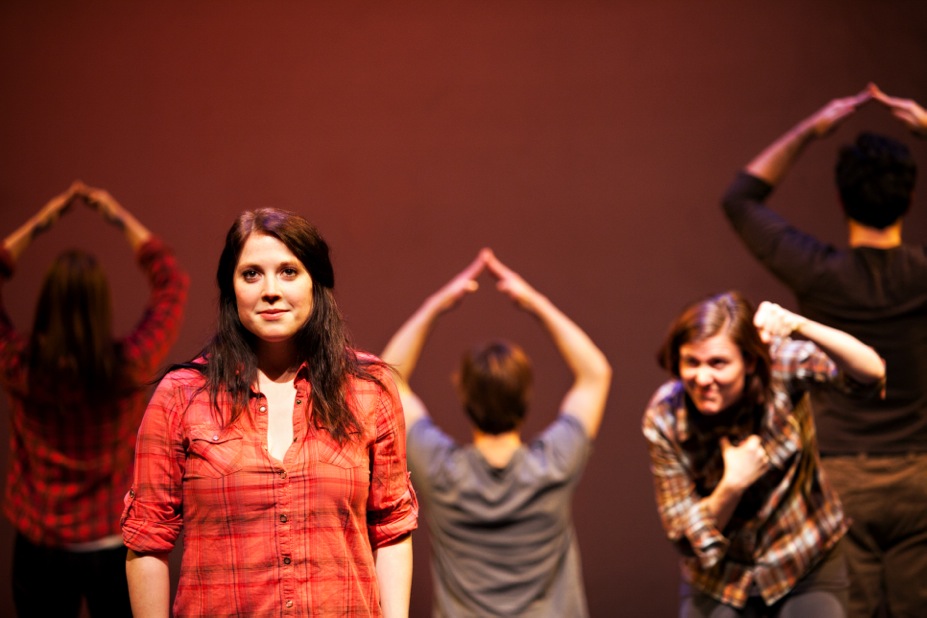 Finding words to adequately describe a new production from Ivey Award-winning theater company Transatlantic Love Affair without repeating myself is starting to get mighty difficult. Thankfully there’s a line from their current production, an expanded remount of their Minnesota Fringe Festival hit Red Resurrected, that describes it best:
“When you first step off the path from Primrose, it’s a miraculous thing.”

Once again, just seven amazing barefoot actors: Heather Bunch, Willie Gambucci, Diogo Lopes, Derek Lee Miller, Adelin Phelps, Anna Reichert, and Allison Witham. Once again, one simple costume for each (by ensemble member Reichert and Lisa Conley). Once again, the sound design is the actors’ themselves, whether the sounds be human, animal or deceptively inanimate objects. Once again, written and directed by Isabel Nelson. Once again, a simple but evocative lighting design by Michael Wangen (even simpler than Ballad of the Pale Fisherman, which I didn’t think was possible. It’s like a visual haiku). No props? No set? No problem.

“Every community has rules and secrets. Dark places you’re not supposed to go.”

Red Resurrected seems so simple on the surface. But what a rich tapestry of a story. What a treat for people who love theater, or who just love a tale well told. Everything I said about it before still holds true (and then some), but let’s dig into the latest incarnation of this story, currently going on as part of Illusion Theater’s Lights Up series.

Red Resurrected is the story of Red (Phelps), a girl fast becoming a young woman trying to find her place in the world. Though Red doesn’t have parents to guide her, she has the whole community of her mountain town by the woods who have joined forces to help raise her. This turns out to be both a good and a bad thing. After all, in a play riffing off the old tale of Little Red Riding Hood, and a production where men pretend to be wolves as well as humans, men can just as easily be wolves of a different sort. Soon Red finds herself needing to escape into the woods.

The narrator of Red Resurrected (Reichert) is also a character in a story within the story, The Woman in the Woods, and part of the larger story as a whole. The tale of Red’s coming of age not only parallels that of The Woman in the Woods, Red’s origins are tied up in the woman’s life as well. When the two cross paths, both are changed. Just as Red’s path diverges from the life of her mountain town—by choice and by necessity—it also separates from The Woman in the Woods. Red takes the skills which everyone in her life have shared with her and uses them to forge a path uniquely her own, something both incredibly brave, and incredibly inspiring. Freedom can be a scary thing, but oh the possibilities it can offer you.

Transatlantic Love Affair’s trademark is to create an entire world out of nothing—well, nothing except the bodies of its actors, which turns out of course to be not “nothing” but everything. Don’t get me wrong.  I’m all for spectacle. But it needs to be spectacle in service of a story, or I’m just as likely to roll my eyes as be impressed.

“As she grew, the town somehow seemed smaller.”

Simplicity requires you to pay attention. Simplicity requires you to be more than a passive observer. You need to be willing to play along. Transatlantic Love Affair rewards you for being alert. Sure, you can skate along the surface of the story and have a lovely time. But what fun it is to connect the dots, and have those “oohs” and “ahhs” come not from some fancy special effect, but from realizing something like “Holy crap, that person is her mother!”

“We do not talk about that woman in this house.”

Or to marvel not at what a realistic animal costume someone has on, but to watch a person take on the moves and sounds of an animal right before your eyes.

“Where are you, girl? It’s about time you figured that out.”

Or to have your eyes boggle not at some multilevel set littered with detailed props, but instead at the wonder of a bunch of actors gathered together to create the rooftops of a mountain town, the walls of a forest hut, or a leaky faucet that shuts up when even it realizes the conversation at the dinner table has gotten incredibly awkward.

“The secret to whittling—you don’t tell the wood what it you want it to be. You let the wood tell you what it wants to be. All you’re doing is revealing something that’s been there the whole time.”

Or rather than thrill to a particularly well-executed sound cue, thrill instead to the wonder of human voices raised in close harmony—sometimes the razor-sharp harmonies of mountain music, sometimes the humorous misbegotten attempts at musicality that only Sunday church services can bring, often the rich beauty of an ensemble that has learned over the last few years how to sing together in service of a story.

“This was the last one. Never got a name.”

These are just some of the joys of Red Resurrected, and they are many and varied. I could go on, but you really should see them for yourself.

“Delivering a baby’s not healing a bone. You gotta care. A lot.”

The additions to Red Resurrected this time out don’t radically elongate the story—it still clocks in at only an hour and ten minutes—but they are pointed, and key to adding another intriguing layer to the narrative. This time around Red has a young girlfriend who grows up and wants to start a family of her own. But childbirth in a mountain town can be hard, and resources hard to come by if something goes wrong.

“They used to come out here. They stopped coming. I stopped caring.”

Turns out The Woman in the Woods is known as a healer in general, but used to be a midwife in particular. Though an outcast from the town, The Woman in the Woods was still someone the townsfolk turned to when it was time to help bring babies into the world. Then her outcast status became more important to certain God-fearing folks in town than the assistance she could offer to women in labor. Not surprisingly, it was the pregnant women who suffered for this decision, not The Woman in the Woods. If you want to take that as a nod to the ongoing political shenanigans around women’s reproductive health, then you go right ahead. It’s not didactic, but it’s there, and it’s a stark reminder than childbirth isn’t always without cost.

“We’ll camp a little while in the wilderness, and then I’m going home.”

A person could dig into Red Resurrected from any number of angles but it all comes back to the simple but wonderful fact that Transatlantic Love Affair has yet another really fine piece of theater on their hands. So audiences are in for a treat. See this thing. Whether you’ve seen them before, or would be seeing them for the first time, it’s some of the best theater you’ll see all year. Treat yourself. See Red Resurrected as soon as you can.