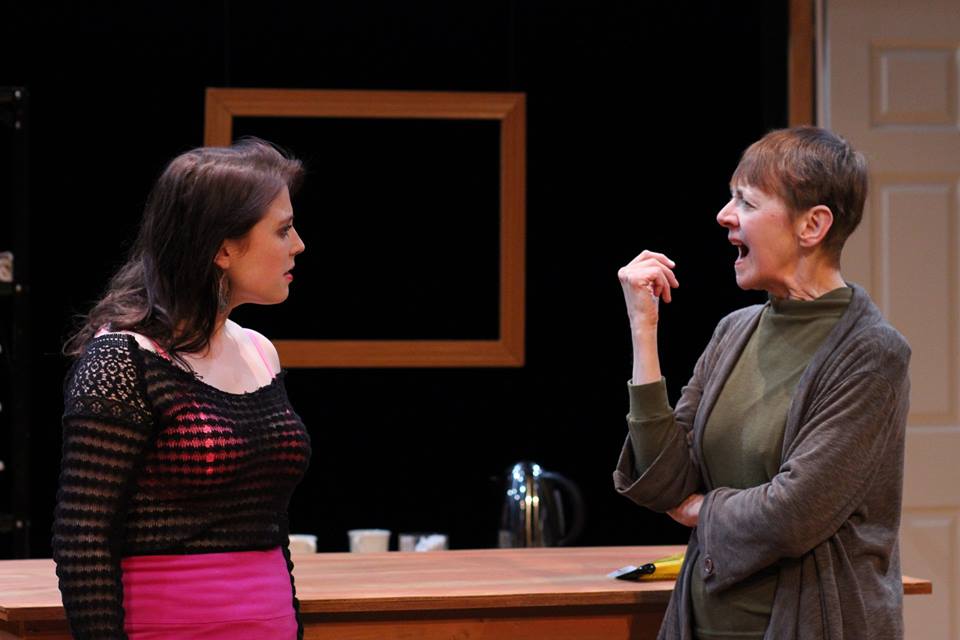 Any show that ends with someone dancing joyously to Prince’s “Let’s Go Crazy” can’t be all bad.

Artists talking about why art is important in the context of a piece of art seems a little ridiculous to me. After all, if I’ve taken the time to go to a theater and watch a play, I’m already agreeing with your premise that art is important. Why not, I don’t know, give me some art? That’s what you want to do and that’s what I came for. So it was with more than a little trepidation that I attended Savage Umbrella’s newest original production Rapture. Still, if I’m going to trust anyone to tread into this territory and not leave me wanting to claw my own eyes out, it’s going to be Savage Umbrella.

“You haunt me from the grave, you lie to me, the least you can do is dance with me.”

What’s the territory, you ask? Well, the story goes something like this: a tenth of the world’s population suddenly just up and disappears. The one thing a lot of the vanishing people have in common is that they’re artists—either well-known figures like Meryl Streep, or obscure people like a trucker who wrote poetry on the side. So the media starts calling the event “the artist rapture.” This is awkward for a lot of people who consider themselves artists who nonetheless are left behind. Not only do they start doubting themselves, the general populace assumes these abandoned people must not be “real” artists after all, and demand their money back for being duped into purchasing their fake art in the first place.

Lucy (Adelin Phelps), a performance student at NYU’s Tisch School for the Arts, loses her best friend and acting partner Sloane (Mason Mahoney) in the middle of a rehearsal for class when he’s raptured away. Lucy also hasn’t been able to track her mother down, though whether she’s been raptured or is just off the grid with her band on tour, it’s hard to know. Since Tisch is suddenly short on both students and staff and may have to shut down, Lucy seeks refuge with her grandmother Evelyn (Mary Cutler).

“What a shock you could find a rich miserable idiot to buy it from you.”

Evelyn is a painter well known (and well compensated) for her works “The Grays” (done, as you might expect, largely in a palette of gray paints). Evelyn is also not the warm, cuddly kind of grandmother. However, Evelyn did not get raptured with the other artists either, and now is an object of ridicule. To add insult to injury, Evelyn’s studio assistant did get raptured, so Evelyn needed to find herself another assistant. That would be Eddie (Russ Dugger) who befriends Lucy.

“Maybe the moon knows. Maybe it knows everything. All you have to do is ask.”

Eveyln doesn’t have friends so much as she has determined hangers-on, like Ann (Karen Bix), one of Lucy’s former teachers. Ann is going to be supportive of Evelyn whether she likes it or not. Also determined to get under Evelyn’s skin is Terry (Laura Leffler-McCabe), a scandal-obsessed talk show host who wants to expose Evelyn for the artistic fraud the rapture has proven she is. To top it all off, Evelyn is also being haunted by the ghost of her former lover, Thomas Kinkade (Carl Schoenborn), “Painter of Light” and spirit of many bad habits.

If you’re an artist, Rapture will either make you feel really good about yourself, or subject you to a long dark night of the soul—or like me, you’ll end up stuck somewhere in between. If you’re not an artist, but because you like going to the theater, you appreciate art, well, I suppose you’ll also enjoy the play. The characters are all strangely endearing in their own peculiar ways. The notion of an “artist rapture” is an intriguing premise, but it also seems a little mean-spirited. Although, I suppose if you’re going to laud the value of art and artists, then you’re almost required to put the message in a framework that is constantly knocking artists down and peg or two, just so you don’t seem completely insufferable and self-important.

“All of this almost makes me feel sorry for you. Almost.”

It’s not often I’m watching a play and feel an overwhelming desire to stand up and say “I call bullsh*t on that!” but it happened a couple of times in Rapture. There’s a pervasive theme running through the piece that artists are supposed to suffer and sacrifice anything else of value in their lives in order to create any worthwhile art. I could not disagree more. There’s a moment when a successful artist is bemoaning the fact that because people actually want to pay good money to purchase their art, creating art is somehow no longer fun. Oh, boo hoo.

“The real judgment day is still to come.”

Then at another time there’s an artist steadfastly refusing to define the meaning of their art, or why it has value. Essentially, the excuse was along the lines of “It has meaning to me, but I’m not going to tell you what that meaning is. If it has value or meaning to someone else, that’s great, but it’s not my job to tell someone else how to feel about my work.” I’m sorry, but you either know what you want to say, what message you want to convey to the audience for your work, or you don’t. It’s not a secret or a puzzle. I can understand not wanting to spoon feed your audience or tell them how to feel. I can understand wanting them to engage the work intellectually and not just be passive observers. But when somebody flat out asks you why you do what you do, tell them. Don’t be so damn precious about it. People don’t think you’re being cute, they think you’re pretentious.

So Rapture is that rare play that has the power to both charm me and tick me off at the same time. That’s not easily done. The characters can be hard to warm up to, and yet equally hard to dislike. Rapture is a very strange beast. Kudos to writer/director Tanner Curl and his colorful cast for pulling off that nifty little trick. (A nod must also be made to the original writers on the project who conjured up the original material that was workshopped into the final script—Blake E. Bolan, Lisa Brimmer, Megan Clark, Seth Conover, and Timothy Otte.)

“I had this crazy-ass dream last night that I gave birth to a cat, which is weird, because I’m allergic.”

Normally I don’t notice adult language. The occasional F-bomb or piece of s**t has become so commonplace in most entertainment these days that I tend to take them in stride. More often than not someone has to remind me, “yeah, there was swearing.” In Rapture, it was so pervasive from the Kinkade and Lucy characters in particular that not only did it register, it got me feeling like my own grandma. “Do you have to use those words? All the words in the English language and that’s the only way you can think of to express yourself?” In these cases, I realize it’s meant to set the two characters in contrast to the more buttoned-up types like Evelyn and Ann and Eddie, but it seemed like a shortcut that was grounded in expediency rather than actual character development. After all, TV personality Terry and artist Evelyn insult people in all sorts of cutting ways, using language simple and complex as their withering weapon of choice. If the use of offensive language is so constant that even someone like me notices, then I have to question why it’s sticking out, and if there might be another strategy that didn’t take the audience out of the story of the play.

“With every brush stroke you’re eliminating more possibilities of what the work could become.”

Everyone in the cast is delightfully off-kilter but I’d be remiss if I didn’t make special mention of Mary Cutler as Evelyn. Cutler is absolutely unafraid to be unloveable. There isn’t a soft-hearted traditional grandma under her flinty exterior just waiting to be set free. There is a flinty non-traditional grandma under that flinty exterior.  When she’s just slightly less unsympathetic, you realize she’s trying to be nice.  It’s a matter of degrees, and the effort clearly pains Evelyn. She even dresses in shades of gray, mimicking her own paintings in a way that remains unspoken but visually present. (Christina Forga’s clever costume design also goes 180 degrees in the opposite direction to embrace the fashion train wreck that is Evelyn’s granddaughter Lucy.)

“Now it’s just a piece of oily cloth and wood.”

Speaking of Lucy, Adelin Phelps also deserves a shout-out for being so game to let her character be a bad actor—and not be afraid, or not care, that we might think the same of her. Another theme Rapture seems to be peddling is the notion that even if we can’t all be brilliant, that doesn’t mean we shouldn’t keep trying. In the trying, we get better. We may never be good. But we’ll be better. There’s something worthwhile in struggling to create a little beauty, even if your victory is only measured in inches.

“Who is this woman? Why is she wearing only one glove? Why does she look so sad?”

Because the other thing Rapture reminds us of is, though the artist may be gone, the things they created remain behind. We’d all like to think that we labor on something over the course of our lives that will have enough value after we’re gone that it still speaks to someone. That something we leave leave behind might remind someone that they’re not alone in the world. That someone understands. That they are seen. That they matter.

Is Rapture that something? Maybe. Maybe not. But it certainly tries. And if it doesn’t make it, it gets awfully close.