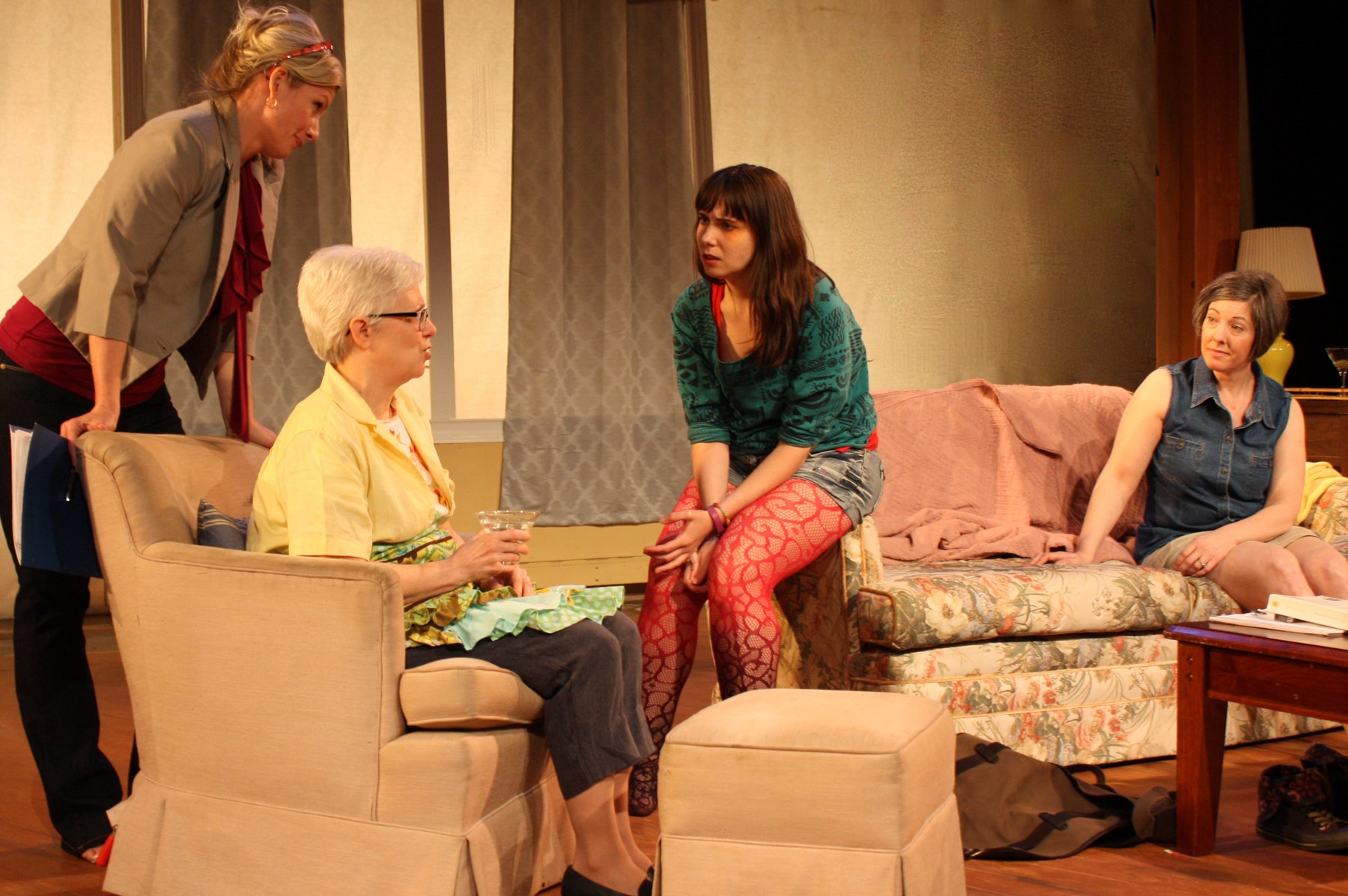 20% Theatre Company’s current production of Gina Gionfriddo’s comedy Rapture Blister Burn isn’t a piece of interactive theater, but it might as well be. It’s been a while since I watched a play and I had to constantly remind myself, “You’re not at home in front of the television set. You can’t blurt out ‘What are you doing?! Don’t do that! What are you saying?! Stop talking, you’re just making it worse!’”

“She sort of stopped drinking and took up talking.”

Rapture Blister Burn is hilarious. It will also give your brain whiplash. You think “That person makes a lot of sense.  No wait, now I agree with that other person. I find this other viewpoint completely repugnant, and yet when this person makes the argument for it, I start doubting myself. I don’t want to think about that, stop making me think about that.”

“First wave feminism. It’s like discussing people who thought the earth was flat. But it’s not. They were wrong.  We moved on.”

Award-winning playwright Gina Gionfriddo’s last two plays—Rapture Blister Burn (2013) and Becky Shaw (2009)—were both shortlisted for the Pulitzer Prize for Drama, and it’s easy to see why. She and her characters aren’t just funny as hell, they’re ridiculously smart besides. The script for Rapture Blister Burn is a never-ending litany of quotable lines. I couldn’t scribble them down fast enough, more of them just kept coming while I was in the middle of jotting down the last one. (Not only does it make me want to read all her plays, but I even want to track down and rewatch all the TV episodes of Law and Order and House of Cards she wrote as well.  Gionfriddo’s writing makes watching pretty much anything fun.)

“I am ready and willing to embrace mediocrity and ambivalence.  You’re not letting me!”

After drunk-dialing two old college friends in a moment of existential crisis, successful author, speaker and New York academic Catherine (Renee Werbowski) finds herself in the toy-littered backyard of Don (Randall J. Funk) and Gwen (Kelli Gorr). Don is an administrator at a local college and Gwen is the stay-at-home mom for their two boys—one teenager, one toddler. Catherine’s mother Alice (Christine Sweet) recently had a heart attack (though she isn’t slowing down and playing the recovering invalid like she probably should). Don got Catherine a teaching gig at his college so she can return and spend some time with her mother.

“I didn’t care when my mother died.  I was very briefly sad but then it was as if great burden had lifted.”

Itching to do some teaching right away and not wait for the fall, Catherine sets up a summer seminar. Since it only has two students, Catherine decides to hold the class in the home she shares with Alice, who is more than happy to make drinks for after-class socializing. Turns out Catherine’s two students are Gwen, and Gwen’s former babysitter Avery (Rachel Finch). Avery lost the babysitter job when she showed up with a black eye she received while helping her boyfriend film a reality TV show (long, funny story best shared in context).

“We can’t all be empathetic.  Nothing would ever get done.”

Catherine’s seminar explores the different schools of thought in the modern feminist movement and how they seep into popular culture in forms of both support and backlash (porn and horror films, for instance). Even though Gwen makes the case for marriage and children, and Catherine makes the case for focus on career advancement, both of them are starting to have major doubts about their life choices. Meanwhile Avery lobbies for the idea that women are beyond all that, and why do we need to make choices and sacrifices at all. Avery both admires and is mystified by Gwen and Catherine.

“I don’t think a person should be alone to have to face the things you have to face between middle age and death.”

It doesn’t take long for the romantic “road not taken” to rear its head. Back in their college days, when Catherine chose to take advantage of an opportunity in London for a year, leaving Don and their relationship behind, Don turned to Gwen for companionship. Catherine got a successful career, Gwen got a husband. Now back in one another’s orbit again, Don and Catherine can’t help looking at each other as “the one that got away.” When they decide to act on the attraction between them, things get extremely complicated, very sexy, and funny in a painfully politically incorrect way that’s off the chart. Rapture Blister Burn intelligently and hilariously explores the theory that relationships of all kinds are irresistible, necessary and more trouble than they’re worth, all at the same time.

“You actually want me to stop?  Or is that a little monologue you need to perform so this isn’t your fault?”

Director Anya Kremenetsky has assembled a great cast, and they all appear to be having the time of their lives playing this story out (and who can blame them—if it’s half as much fun to perform as it is to watch, they probably can’t wait to get to the theater and get back onstage each weekend). Gionfriddo writes all these roles with multiple layers that this cast really digs into deep.

“If all you do with your life is serve people who leave you, you’re f**ked.”

Kelli Gorr’s turn as Gwen may always put the brutal in brutal honesty, but you still can’t help feeling for her when her well-ordered world starts coming unglued. You want to hate Don on some level for selfishness or laziness, but Randall J. Funk makes it hard not to like the guy, even when he’s juggling two women—he’s just too up front about his shortcomings for anyone to claim they hadn’t been warned. Avery, representative of “today’s generation,”could have been a thankless role but the playwright wrote it so fully that Rachel Finch can grab on with both hands and make her a three-dimensional person—and a hell of an entertaining devil’s advocate for all involved. Christine Sweet never misses an opportunity to make the most of her moments walking into the middle of chaos with a tray of much needed martinis.

“In a relationship between two people, you can’t both go first.”

Renee Werbowski’s Catherine is the lynchpin this whole crazy thing revolves around. What a gift this role is for an actress, and what a gift this actress is for the director and playwright. Faced with her mother’s mortality, Catherine starts questioning everything, and then making radical decisions that have serious (and silly) consequences for her and everyone around her. There’s a lot of layers of drama and reality underneath all this comic absurdity that ends up making it that much funnier, and Werbowski plays all these layers—both the serious and the ridiculous—and makes it look easy.

“Burglary is still burglary if I leave my door unlocked.”

And while the sexiest thing about all these ladies is their considerable brains, costume designer Jenna Rose Graupmann makes all the women in the cast look unique, individual and fantastic. Renee Werbowski as Catherine, the woman who has it all, leads the pack, of course. But Avery’s quirky style looks great on Rachel Finch. Kelli Gorr’s Gwen always looks comfortable but very pulled together, and Christine Sweet’s look as Alice lets you know where Catherine got her sense of style.  All the women look very different from one another yet are still part of the same reality, which makes for some very interesting and conflicting visuals when they all gather around on Alice’s couch. Even Randall J. Funk gets a low intensity makeover—after all, his laid back regular dude look still has to inspire both Catherine and Gwen to fight over him.

“Skip ahead to the part where you’re stripping.”

Scene shifts are normally the bane of my existence as an audience member. It’s so easy for all the air to go out of the story and for the production to lose momentum as the lights go down between scenes and people move furniture around. But director Kremenetsky and her production team know this, so they plotted them out as part of the ongoing action. Grete Bergland designed the set and props in such away that there’s always just enough but not too much on stage to set the scene—and nearly everything’s on wheels. The back wall is also a scrim which lighting designer Courtney Schmitz backlights to lovely effect. In fact the between scenes play of light and shadow on the set pieces and the actors, who stay in character for little dumbshows throughout, are almost more beautiful than when the lights come up. I’m kind of sorry to see them end and have the full light of reality return. (But then I start laughing at the dialogue and it’s all good again.) Stage Manager Rachael Rhoades, her assistant Reena Novotnak, and their stage crew (Hannah J. Stein, Kerry Landin) almost have a little dance going, choreographing and executing the flow from one scene into the next, all to the musical accompaniment of Inna Skogerboe’s spritely sound design. Kudos for keeping me engaged even between scenes.

“She’s a WASP  Functional alcoholism is her cultural heritage.”

Rapture Blister Burn is a delightful piece of theater. So smart, it’ll make you feel smart trying to keep up with it. So funny, you don’t mind having your brain repeatedly poked with a sharp stick. Even though it’s impossible to catch everything flying around on first viewing, you still don’t feel like you miss anything important. It’s the kind of show that rewards repeated viewings. (I’m tempted to do so myself, actually.) 20% Theatre Company delivers the whole package this time around. Well done, everybody. (Now when are you doing Gionfriddo’s Becky Shaw? I’ll be first in line—right after I come back to see Rapture Blister Burn again).