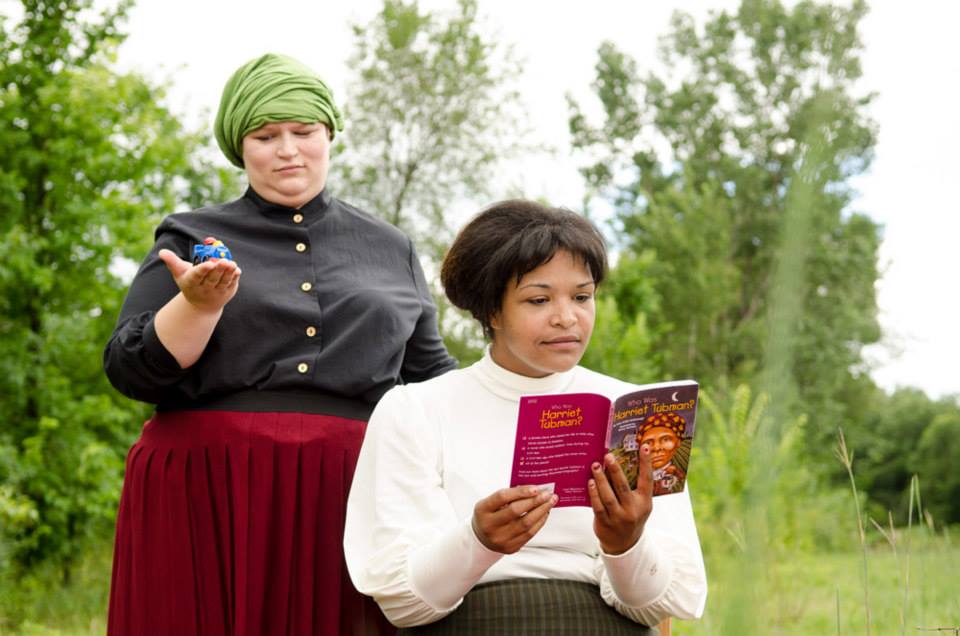 Recently I was out for a walk and saw one of those rental moving vans which had a marketing campaign with state-specific images of Americana plastered on the sides of their vehicles. This particular one caught my eye because it had a picture of Harriet Tubman leading the way along the Underground Railroad to help bring slaves to freedom. While I appreciated the nod to history, Harriet Tubman on the side of a U-Haul just seemed vaguely wrong to me, but in a way I couldn’t adequately articulate. Otherwise I probably would have found a way to make a joke about it. The fact that my internal sensor was fighting furiously to get me to keep my mouth shut was something I found instructive, but again not in a way I could put into words.

Thankfully, Abby Swafford is one of those playwrights who seems to delight in swatting back at her internal sensor, finding the humor in uncomfortable moments—or perhaps she’s finding the uncomfortable moments inside the comedy. In Little Lifeboats’ latest production of one of Swafford’s plays, Raise Your Voice (Suzanne Cross): That F***ing Harriet Tubman Play, it’s hard to tell one from the other. There’s no clear dividing line. The comedy and discomfort blend, which is an interesting choice for a play dealing with race. Let’s face it, as well-intentioned as some white folks may be (myself included), we flounder rather spectacularly when it comes to discussing and taking action around issues of race. But we need to keep that conversation going. Sometimes the only useful or proper response to this flailing around is to poke fun at it. Even that has its pitfalls. It’s a tricky balance the production and the script are trying to strike, and for the most part, I think they succeed.

“We have to be post-racial. Because that exists.”

I say “I think” because Raise Your Voice is perfect for people who like their theater meta, but I am not one of those people. So I kept struggling to appreciate the play for what it was, rather than wish it was something different. Many people in the audience were laughing it up heartily around me, so they had no such resistance going on in their heads while they were watching it.

“How else is the audience supposed to know that you’re free?”

The actors in Raise Your Voice (Suzanne Cross): That F***ing Harriet Tubman Play are participating in a play about Harriet Tubman called “Minty’s Revenge” (yes, Harriet Tubman’s nickname was Minty). The actors are playing their characters in “Minty’s Revenge.” They are also performing the process of rehearsing that play, so we also see the actors as people. Then they also repeatedly break the fourth wall, speaking directly to the audience, performing their own comical flashback effects, etc. The characters and the actors have the same names. The script and production fold in on themselves so many times that they kind of make my head hurt.

Victoria (Victoria Pyan) is a white actress being asked to play the role of Harriet Tubman (thankfully, no blackface—there are lines we don’t cross if we don’t want the audience to tune us out entirely). Meanwhile, African American actress Suzanne (Suzanne Cross, of the title) has been given the role of famous white woman (and founder of the American Red Cross) Clara Barton. The writer/producer/director of “Minty’s Revenge,” Aaron (Aaron Konigsmark), claims to be colorblind in his casting choices. He’s also a fact-free zone when it comes to history, thinking the Underground Railroad is in need of actual trains, or that the concept of pilgrim in the context of the Underground Railroad means that the actor (Alsa Bruno) should be dressed like someone who landed at Plymouth Rock and celebrated the first Thanksgiving holiday. Layer on top of that the fact that Suzanne is suffering from some form of blackouts during which she hears a Voice (Comfort Dolo) that may or may not have her best interests at heart.

“We’re already onstage in our swimsuits. What more do you want from us?!”

Actual director of the production Chris Garza gets solid, believable performances out of the whole cast, which is harder than it might seem with a set-up like this. There also appear to be moments when actors, Bruno in particular, are allowed to improvise within the confines of a certain scene. It helps tremendously that Bruno is a skilled improvisor and his castmates know how to roll with what he gives them. The improv here isn’t limited, but it does feel tightly controlled in a way that keeps it serving the play rather than derailing it.

“She heard the voice of God.”

“Or she was a schizophrenic.”

The other thing which happens often during the play is that the actors will pick up an enormous three-ring bound copy of “the script” and spend some time berating the playwright, calling out into the dark of the audience space to take her to task. This is where I start to think the script takes its “play within a play within a play” conceit maybe one step too far. Almost as if it’s trying to inoculate itself against audience criticism – “see, I hit myself first, so you don’t have to hit me.” Perhaps I’m supposed to take that convention one step further and realize the play is also parodying plays that use this strategy to try and pre-judge themselves and hold the audience at bay, but I wasn’t entirely clear that was the case, and if so, I’m not sure what end that’s serving.

“Tell me where the anger goes.”

Raise Your Voice is a play that doesn’t want me to feel, it wants me to think. It doesn’t want me to get lost in the story, it wants me to be aware I’m watching a story, specifically the ways in which a story is told. It’s a conversation between the playwright, the actors, the production, and the audience in the purest, most basic sense of the idea. But it also effectively neuters any kind of emotional response to the characters and the plight in which they find themselves. One gets the feeling the play wants you to feel for the actress who wants the audience to understand how emotionally damaging it can be to constantly fight against unrealistic standards of beauty in the casting process, just to be able to have the privilege of telling a story (since theater very often doesn’t provide much in the way of monetary compensation). One gets the feeling the play wants you to feel something when an African American actress says, “I am free.” Instead I’m thinking, is she? are any of us? and free from what, exactly? free to do what, exactly?

“You can’t just leave me yelling ‘Slavery!’ by myself.”

Honestly, maybe that’s the point of watching the play. Raise Your Voice isn’t “edgy” in the sense that the play within the play wants to be edgy. It isn’t trying to be. In fact, it’s not even as edgy as its title might suggest. Like all good titles, it grabs your attention and gets you in the door. The play doesn’t offer any answers, probably because there aren’t any. Or if there are, the answers probably aren’t going to come from white people. For want of a better metaphor, it gets under your skin. Walking back from the theater to my car to drive home, my steps (and the drive after) were punctuated by audible exclamations of “Hmmm” as I kept thinking about things that bugged me, or that I didn’t feel I fully understood.

“Together, let us show you how we solved slavery.”

Plays that follow me out of the theater are rare. Plays that get me to think and rethink not just about the notion of theater as a means of conversation, but also think about something as knotty as race in America, are rarer still. Plays that won’t provide easy answers and yet don’t allow me to throw up my hands and give up, but keep me thinking about how I can help solve a problem, are perhaps the rarest of all. Raise Your Voice (Suzanne Cross): That F***ing Harriet Tubman Play is one of those rarities. You should see it, and laugh at yourself.