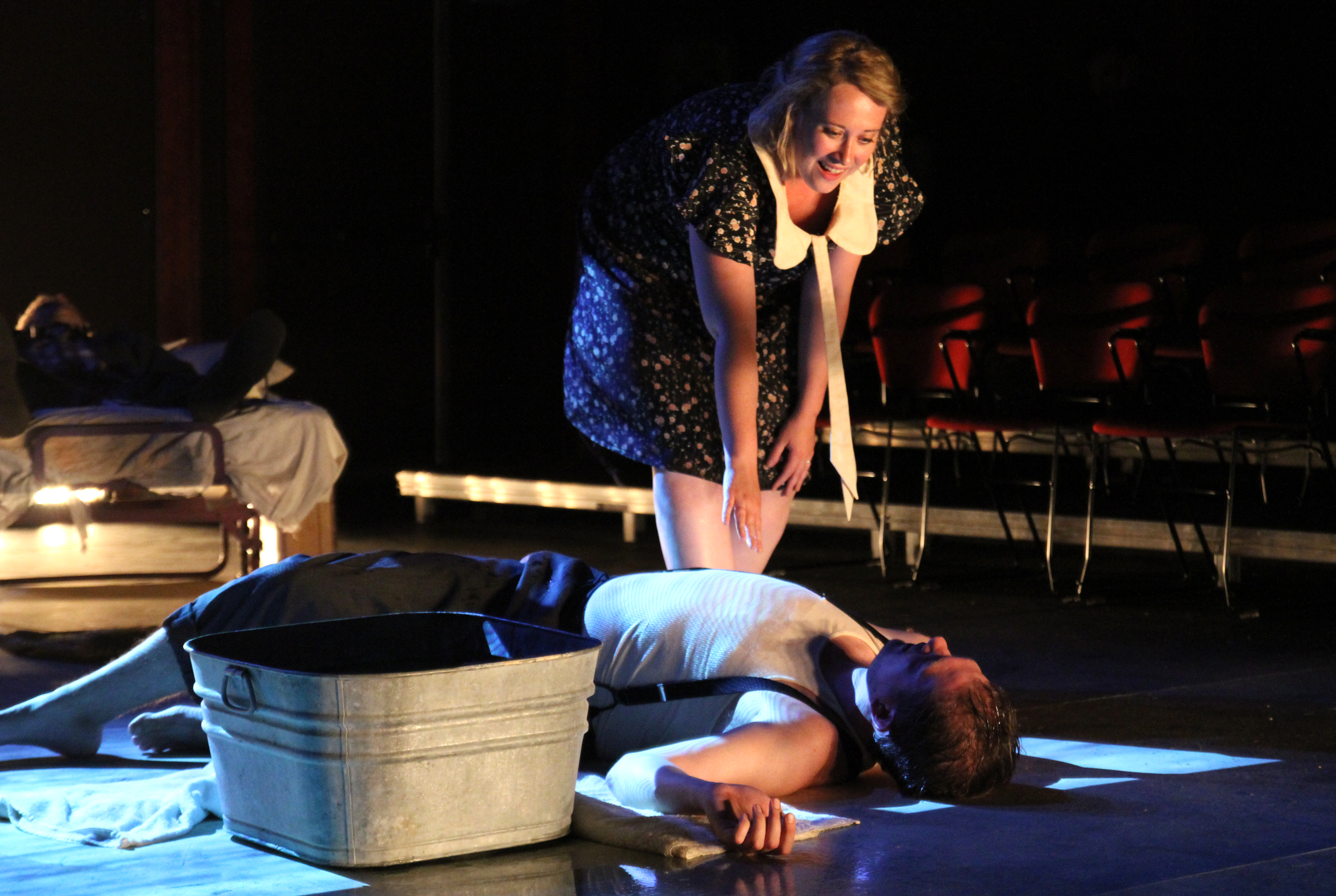 There’s a moment in the middle of the second act of Savage Umbrella‘s production of Rachel Nelson’s new script Rain Follows The Plow that damn near blew my mind with how perfectly and subtly it was executed. One thread of the story takes place in the present, 2013 America. One thread of the story takes place in the past, 1930s Dust Bowl America. In this scene, on a motel room bed, the past and the present exist at the same time in the same space. A couple from the present and a couple from the past switch acting partners, and by the end of the scene switch back again. But throughout the scene, the characters we see side by side on the bed never see one another. The bed always has two people in it, but those two people are always alone.

“Blood. Don’t mind. It keeps the dust down.”

It’s friggin’ brilliant. Director Laura Leffler-McCabe and her cast pull off this balancing act with such a gentle touch, you’re apt to overlook how hard it is to do a scene like this without it being hopelessly confusing. The scene itself isn’t perfect, but there are moments of clarity and longing in it that are breathtaking. In a way, it’s a snapshot of the overall experience of watching Rain Follows the Plow. Huge chunks of the first act ring clear as a bell, and then things start to come unglued in the second act in a way that doesn’t feel like the storytellers have complete control over the story and what they want it to convey to the audience. Rain Follows the Plow is still well worth seeing. I’d just really like to see it once the writer has another crack at pulling the second act together.

“If another living creature comes through this yard again, ever, take it down.”

The script is taking a swing at some huge subjects, grappling with the relationship between human beings and nature, the concept of America vs. the reality of America, the fluid state of gender and sexuality (and how some people are ill-equipped to handle it), how to exist in a way that doesn’t let your sadness and disappointments break you. Rain Follows the Plow lands some of its punches with surprising force, and other times it swings wildly catching nothing but air. Still, I’d rather have an ambitious script than one that plays it safe, so I’m looking forward to seeing more from playwright  Rachel Nelson. (I’m already always looking forward to more from Savage Umbrella—that almost goes without saying.)

“The remnants of what came before. Of what if, of maybe.”

I want Zac Campbell to design a set for a play of mine someday. The way Campbell transformed the playing space of the Playwrights Center is dazzling. The audience is on two sides of the stage, with the playing space between. Dozens of items hang from the ceiling by strands of rope and twine (props to the properties master Hannah K. Holman): jars, pine branches, a hurricane lamp, a wood stove, an album of trading cards, a tea set, a picture frame, a plow, a 1930s-era telephone and broom and microphone and radio, bare lightbulbs, a flyswatter, an iron, a watering can, pine cones, an electric fan, a garden hose, an eggbeater. Nearly all these items get utilized during the course of the action, some in surprising ways.

There is a cluster of fallen items at the center of the stage: a couple of chairs, a bench, a folded-up rolling cot, a metal laundry tub, and a sheet of plastic. I have to admit from where I was sitting they psyched me out. When a human hand made a sudden appearance early in the action, I was genuinely surprised. The script moves quickly through space and time, and Campbell’s setting offers up everything that’s needed to set the scene without cluttering the space with anything unnecessary. The sense of period, enhanced by costumes from Heidi Jedlicka and Andi Vargo, is always crystal clear—except in those moments the play wants it to be fuzzy. Ted Moore’s sound work adds to both the reality and surreality of the story in key moments throughout the evening. A new play really couldn’t ask for a better world in which to exist. The Savage Umbrella teams nails the details at every turn.

“When the world rips the skin from itself and rails in response.”

In 2013, college student Clara (Emily Dussault) sets out on a quest to reclaim the place out in the valley where she was raised. Smitten fellow student Jack (Neal Beckman) goes with her on the journey, hoping to disarm some of Clara’s emotional defenses and get to know her better. On the 1930s Dust Bowl frontier, radio prophet Clarence (Michael Ooms) extols the virtues of staying put and not giving up on the arid landscape they call home. Meanwhile, Clarence’s long-suffering wife Ingrid (Blake E. Bolan) tries to maintain a home and beat back the relentless dust and dirt of the midwestern prairie. Ben, a representative of the government (Bryan Grosso), comes calling, sent to enlist Clarence in the PR war against Dust Bowl despair. Another Ben (Mason Mahoney), Clarence’s childhood friend (and more), haunts Clarence’s memories, and his heart. Mahoney’s presence, labeled as the Catalyst (I know, cut them some slack, they don’t belabor it), also pops up in the path of the other characters, past and present, offering comfort in a variety of androgynous forms.

“You don’t qualify for help or sympathy.”

For a play that gives women both the first and the last word, Rain Follows the Plow doesn’t give Clara or Ingrid much of anything to actually do in between. Despite the best efforts of Savage Umbrella regulars Dussault and Bolan, the female side of the play remains vague and opaque. Clara remains just as withholding from the audience as she is with poor Jack. What exactly is going on with her former childhood home or her mother abandonment issues is never quite clear. She’s set up as our lead character in the present, but she ends up more like a McGuffin: drawing all the elements of the play together, but ultimately unknowable. (Again, not Dussault’s fault. She throws herself into Clara with all she’s got.) Ingrid gets some remarkably poetic passages, many of them even compelling as well as pretty, but the play feels like it’s marching in place during most of her scenes. Though a woman’s role was certainly restricted by society in her time, it doesn’t mean Ingrid is completely incapable of driving action or story.

“Where do you come from when you just appear out of nowhere?”

By contrast, the male characters do most of the heavy lifting—and get most of the action, sexual and otherwise, much of it with each other. Ooms as Clarence is mesmerizing, particularly in his bombastic radio diatribes. On the flip side, Clarence’s yearning for tenderness and love as the world he knows comes undone around him is also deeply affecting. Grosso’s visiting government man brings tension of all kinds through the door with him. Mahoney gleefully flits from one character to the next. His sexuality as well as his identity to those that see him is completely fluid. Though I’m all for more queer content onstage, my one quibble with the play in this regard is that there’s a whole lot of angst and hand-wringing going on. While men do actually touch and kiss each other, they pay for it. They’re not allowed to enjoy it. Though Beckman as Jack is almost giddily bicurious, bisexual or ambisexual, the present-day plotline he finds himself in is the one with less stage time and less gravity to it. The scales are tipped more toward Brokeback Mountain/All-American Boy than Windsor v. United States.

“It’s hard to be a Christian when you feel unforgivable.”

Normally, Savage Umbrella is shrewd and skillful at tying their stage offerings to modern day social struggles—whether it’s income inequality, religious fundamentalism, the fight for civil rights (gay or otherwise), or the sweeping notion of the personality of the American experiment. Here, in Rain Follows the Plow, what seems to me the obvious and most pressing parallel isn’t even touched. What’s our modern day Dust Bowl—where nature slaps humankind back into place? Climate change. Monster storms. Monster fires. Rising oceans and rising temperatures. The subject is enormous and complex and exactly the sort of thing Savage Umbrella attacks head on. Here instead, we get some not entirely clear subplot about a dam that Clara wants to stop being built (I think) which will somehow impact her home turf—flood it or deprive it of moisture, I was never quite sure.

“You know the worst thing about being young? Everything’s happening to you for the first time. You have no faith in your ability to survive.”

In fact, there’s a lack of consequences for most of the things taking place in Rain Follows the Plow. The first act strongly sets up all manner of powerful relationships submerged in conflict. Then the characters just drift away from each other. The play stops rather than truly ends. Clarence and Jack both end up with prostitutes (or one-night stands?) rather than deal with the women (or men) who actually have control of their hearts. Speeches meant to be big revelations, in spite of their lovely poetry, end up revealing nothing of consequence to the situations at hand. It’s as if the play is saying, “OK, everybody get ready because we are going there!” and then ducks down and hopes you won’t hold it to any of its earlier promises. The writer, director, cast and design team can all deliver on this premise. For some reason, they just don’t.

“At the very center of him was a thin red streak of wanting.”

Still, I’d rather see half a great play with six strong performances than a whole mediocre play where nobody cares. One of the downsides of being a theater critic is you have to slink off right away after the show and start formulating something to say. Part of me would much rather stay behind, particularly because the Savage Umbrella crew loves to talk to their audience about the issues of the play, and playmaking in general. I miss those kind of talks. Say what I will about Rain Follows the Plow, everyone involved cares, a lot. A writer couldn’t ask for a better first production of a script in process. Hopefully Nelson will take all the lessons from this production and the responses of its audience and not just craft Rain Follows the Plow into the great play it can be, but also start spinning her next story.