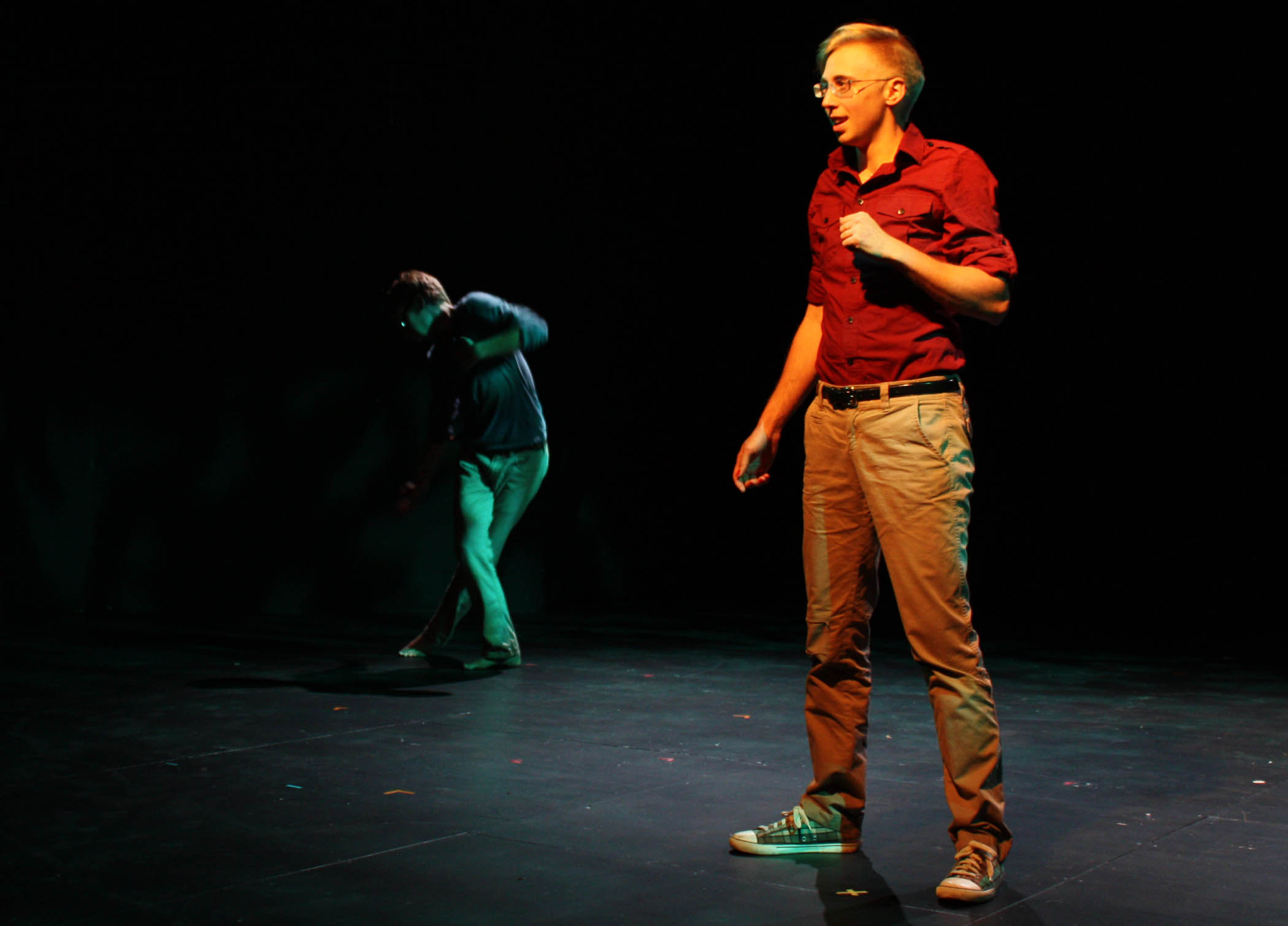 Not to pit one part of 20% Theatre Company‘s three part Q-STAGE new works series against any of the other parts but after seeing Sets A and B, I’m a little worried for Set C. I was already impressed with the work from Puck Matz and Paige Collette in Set A. Donn Saylor and brothers Nathan and Kris Gebhard in Set B just raised the bar even higher. Of course, looking at it the other way, if the first four of this six artist series are any indication, the last two should be equally impressive.

Since Q-STAGE is supposed to be new work from local queer artists, I was prepared to give it some slack. “Well, it’s early on, I’m sure it’ll grow into something.” Turns out, no slack needed. Q-Stage is showcasing some really solid work by artists I want to see more of. I still want something like Q-Stage to be a place where people can experiment and perhaps even fail spectacularly, so they can push boundaries, grow as artists, and hopefully bring audiences along with them. But I’m not going to complain if the experiments pay off as handsomely as Sets A and B either. So let’s get to Set B…

“Your Uncle Billy and your Uncle Jimmy are the happiest married couple in Hollywood.”

One-person shows can be a challenge for the audience as well as the performer. Friday night, the end of a long work week, and you want me to sit in the dark and listen to one person talk for almost an hour? If the person has a pleasant voice, that can be a curse as well as a blessing. My brain might mistake that cue for a bedtime story and be gently lulled into rest. No such worries for Pilgrim Soul, however. Writer/performer Donn Saylor had me riveted from start to finish. My attention didn’t drift once.

“In those days, many of us were openly homosexual, and those that weren’t didn’t need much convincing.”

Pilgrim Soul‘s subtitle sums it up: The Life of William Haines. Haines was a Hollywood movie star of the 1920s and early 1930s. In 1930 a survey of film exhibitors labeled him the top male box office draw in the country. So why didn’t I know about him before seeing Pilgrim Soul? He was openly homosexual, with a husband. The film industry went from considering that acceptable to demanding that he ditch the husband and get himself a wife. Rather than live life in a closet newly constructed for him, he walked away from the movies. So again, why didn’t I know about him? I feel like a poor student of my own history. One of the many benefits of seeing Pilgrim Soul is now I want to go digging and learn more.

“A trained elephant and Norma Shearer – how could I compete?”

Pilgrim Soul isn’t just a history lesson, though. Donn Saylor as Haines is a great storyteller with a heck of a story to tell. Nearly half a century before Stonewall, Haines not only found love and set up a happy home, when he lost one career he simply built himself another, as a designer. Hollywood didn’t break him, he broke Hollywood. This wasn’t the story of a tortured soul. This was a guy who was friends with Joan Crawford both before and after she was given the name of Joan Crawford by the movie studios. This is a guy who apparently also had a little fun with Clark Gable, before he became Clark Gable. This was a guy who stared down Louis B. Mayer and refused to be shamed. This guy didn’t drown himself in alcohol or drugs to dull the pain—he drank and took drugs for fun.  He lived to the ripe old age of 73, when the cigarettes he was smoking finally caught up to him, and died of cancer with his husband of 47 years at his bedside.

“Have your fear, but don’t let it stop you from walking into each new sunrise.”

Haines and his husband Jimmy had a flexible definition of marriage. They weren’t slaves to monogamy. That and the hedonistic reputation probably made Haines a less than ideal “role model” for gay history purposes, but c’mon, really?  This is a man who walked away from Hollywood rather than walk away from the love of his life.  What’s not to admire about that?

“Of course swans mate for life.  They all look exactly the same.”

In Saylor’s hands, Haines mischievous personality and sense of humor shine through. The performance is so free of big theatrical flourishes that when one or two moments of high emotion do appear, they seem oddly out of place.  Haines comes across as a man who is in control of both his life, and the telling of his story. He knows it’s a good story and he strings the audience along, delivering on the promise of a good time.

“Acting is not that difficult.  Greta Garbo just makes it look difficult.”

I have to admit, when the opening image is of a man in navy blue silk pajamas, facing upstage, smoking a cigarette while listening to Edith Piaf, I did have this tiny moment of dread, as if my brain was warning me, “Oh no, it’s going to be one of THOSE stories.”  But there’s nothing stereotypical about the story of William Haines. And rather than just being the story of an actor, it’s the story of a human being who happens to act. I’m still bothered by the fact that I never knew about this man before, but I’m really happy Donn Saylor took the time to introduce us.

“I think about him every day.  I don’t know whether he’s married and has children, or he chose a path like mine.  I hope he’s loved.”

In December 2012, Kris Gebhard was out on his bicycle when he was hit by a car. He spent months in the hospital and needed to learn how to walk and talk again. The bike helmet saved his life, but his brain was still scrambled enough that it took awhile for the healing process to be able to create new memories again. Seeing him perform alongside his brother Nathan in their spoken word/movement/music piece Trust In Chaos, you’d never know he’d suffered so much as a scratch. The accident may have knocked him off balance for a little while, but it didn’t slow him down.

“My first memory of 2013 was a hospital bathroom.”

I still remember Kris’ rousing spoken word anthem “Disordered Bodies” which closed out 20% Theatre’s The Naked I: Wide Open early last year. It’s the same performer in Q-Stage. Kris may have been to hell and back since the last time I saw him onstage, but he’s still processing and connecting to the world with the flurry of words that spin through his brain and out of his mouth. They’re the words he uses to pull the audience to him, and I defy anyone to try and resist that pull. I certainly can’t. I came away from Trust In Chaos completely charmed, slightly intimidated and totally inspired. I probably have a little bit of a writer’s crush on this performer.

“Your brain injury makes you more sensitive to everything.”
“I think having no human rights makes you sensitive, too.”

Kris isn’t alone this time. His brother Nathan lends his voice to the proceedings at key points, but his primary contributions are musical and physical. There’s a marimba onstage! (It’s so much fun it requires an exclamation point.) Sometimes the music is the focal point, sometimes it provides background music for one of Kris’ spoken word odes, sometimes it becomes a place for the brothers to play together. The music even sounds like fun, almost as much fun as watching the brothers (solo or together) make the mallets fly over the wooden bars, often with two mallets in the same hand.

“Maybe our brains are like downtown Minneapolis in the winter.”

Nathan also accompanies his brother’s words with his body, interpretive movement that expands on or works in counterpoint to the things being said—running, leaping, falling, flopping, jerking, rolling, pounding himself. Exuberance, confusion, anger, humor, frustration, joy, it’s all there in both the words and the movement on stage. The brothers Gebhard make a great team.

“If I could dine with a hundred lonely superheroes…”

I say “the brothers Gebhard” but I could very well be getting the whole context wrong. Kris is trans* and has a love/hate relationship with pronouns that threads through a lot of his work. The only reason I’m comfortable using “he” at the moment is because that’s what was in the bio in the program. Kris’ life riding the fluid wave of gender, and dealing with society’s queasiness around sexuality (and anything outside the “norm” of the male/female binary) naturally informs his work. In fact, it electrifies it – the same way lightning splits open a night sky.

“So why am I comparing trans to being brain injured?”

At the same time his insights are very personal, he repeatedly opens his worldview up. He seems uninterested in protecting boundaries and categorizing people. The biological family, the chosen family, the human family—Kris constantly makes the call to spread love and bring all sorts of folks together under the umbrella of community. It’s not that we can’t go it alone, but why should we? If you open your mind, you can open yourself up to all manner of wonderful possibilities. Defining who we are should never limit who we are, to ourselves, or to others. Kris already knew this, and spoke of it, but I suppose there’s nothing quite like a life-altering collision with a car to throw things into even sharper relief. Love has rarely seemed so wickedly smart, and wise, on stage before.

“You didn’t dress well enough for this bus.”

As someone who wrestles with words and music himself, I’m both delighted by and in awe of the way Kris and Nathan Gebhard make words dance, around each other and all the rest of us. It’s a treat to spend an hour in their company. The standing ovation Trust In Chaos got at the end on opening night was well-deserved.