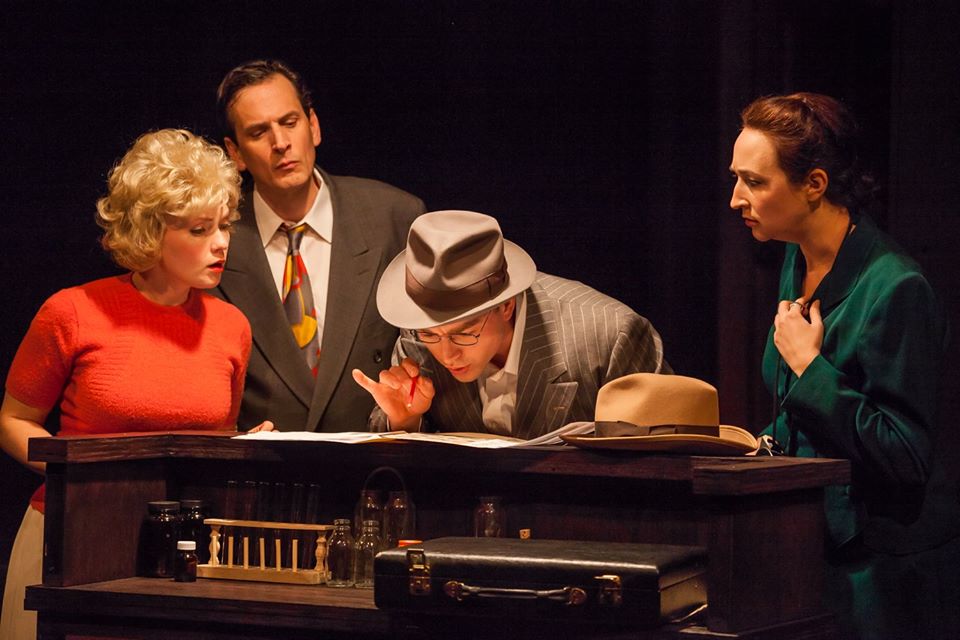 I say this with love, but it’s hard not to hate John Middleton sometimes, just a little bit. Of course, for all the same reasons, it’s impossible to hate John Middleton. What might those reasons be? Well, he’s ridiculously talented, which often just makes the rest of us look bad. I can’t remember a time I haven’t enjoyed John Middleton’s performance as an actor. Even when the play was crap, he was always great. And when the play was wonderful, he was always a big part of the reason why. He works constantly—front and center or one of the supporting players, he’s never giving less than his all.  Even though I see a lot of theater, I’m sure I’ve missed twice as many things as I’ve seen in which John was in the cast.  His output is both intimidating and exhausting. And now he’s written a play.

“What we know, what we write, what we publish and what we believe are all totally different things.”

John Middleton’s play, Prints, is hilarious, smart, creepy, violent, sweet, sad, and quite possibly the most fun I’ve had in the theater in a long time. Prints is genuinely enjoyable from the second it starts all the way until after the curtain call when they play the full, in-focus, black and white movie scene recreations they’ve done for background effect (which we only get to see and hear in blurry snippets within the production itself. It’s like a live, in-person DVD extra, and who doesn’t love a little extra dose of The Invisible Man and Return of the Mummy?) Torch Theater has given Prints a snappy and loving coming out party. All new plays should get this generous a welcome. Of course, all new plays should also be this good.

“I’m trying to put a pretty bow on this box of turds.”

Not even based loosely but rather “corrupted from a true story,” Prints gives us a bizarro universe rendering of the 1930s era kidnapping of William Hamm, Jr., president of the Hamm’s Beer brewery. Hamm (Ari Hoptman) is taken hostage by notorious thug Creepy Karpis (Zach Curtis), working with the Barker clan—Ma Barker (Karen Wiese-Thompson), and son Fred (Sam Landman), who frequently gets mistaken for his twin brother. Hamm’s wife Mitzi (also Wiese-Thompson) leans on Frank, the local chief of police (also Landman) in her time of distress. But the chief might be a little too close to the potential widow to want the case solved. So Hamm’s daughter Pearl (Summer Hagen) enlists the help of veteran newspaper reporters Kash (John Middleton) and Ginny (Mo Perry), and a buttoned-up young FBI officer named Monty (Casey Hoekstra), to find her father before it’s too late. The fact that Monty is swiftly smitten with Pearl further complicates matters. When Monty’s boss J. Edgar Hoover (also Hagen) decides to make an appearance for publicity purposes around the impending big arrests, things get knottier still.

“Of the two of us, which one do you think is on record for farting in the mayor’s office?”

Prints takes its title in part from the new science of fingerprint detection that the FBI used with great success to identify Karpis as Hamm’s kidnapper. Given all the CSIs, Law and Orders, and NCISs clogging our TV screens these days, it’s hard to imagine a time when the circumstantial evidence of fingerprints and DNA weren’t a regular part of the business of solving crimes. Not realizing he’s already left his prints on the ransom note, Karpis orders the alcoholic young doctor he has on retainer (Hoekstra again) to remove the pads of his fingers. When his mugshot ends up splattered all over the front page of the newspapers anyway, he orders the doc to give him a new face. That operation, as well as the doc’s way too close friendship with Karpis’ long-suffering girlfriend Delores (Hagen again), doesn’t end well for anybody.

Part screwball comedy, part gangster drama, Prints puts a uniquely Minnesotan twist on the genres of those old B-movie black and white films, all the while reveling in the kind of tricks only live theater can get away with. In addition to the twists and turns of the mystery, always delightfully one step ahead of you just when you think you’ve got it figured out, a big part of the fun is watching the actors transform from one character to the next with nary a hiccup. The way Hagen goes from glamorous Pearl to mousy Delores, or Wiese-Thompson switches from simple-minded Ma Barker to well-heeled socialite Mitzi, or Hoekstra whips from dissolute doctor to squeaky clean G-man, it’s just a hoot to follow along as the plot barrels forward. (John Woskoff’s gorgeous costumes are an extra boost in this regard.) Hoptman also gets in on the multi-character fun, playing not only kidnap victim Hamm, but also speak-easy bartender Kingsy, and a master of ceremonies at the movie theater whose monologue of 1930s era jokes gets progressively funnier as he haplessly attempts to work the crowd.

It’s also great fun to watch director Craig Johnson and an ensemble this good take a crack at a script this witty and well-constructed. One of the glorious set-pieces of the production is a dual scene in which Kash sets out to pry information from Mitzi at the same time Ginny is shaking down the Frank the police chief for clues. The police station is on a raised platform behind, while the Hamm sitting room is down closer to the audience, but they both share the same bar. So Kash and Frank perform a dance of near misses as they prepare their libations for the ladies. At first the dialogue of the scenes run parallel, then they intertwine, then Kash and Ginny are literally speaking to one another across the two scenes as they progress. The high point of hilarity comes when an exasperated Mitzi tosses her drink back over her shoulder, the liquid lands in the police station, and Frank slips on it, much to his bewilderment. The whole sequence is a highly theatrical moment, finely orchestrated and perfectly executed.  It reminds you why it’s extra fun to be in the room, live, watching theater happen.

“I slapped him.”
“Why?”
“Because he was on fire and I was putting out flames.  What do you think?”

Also transforming itself over and over again? Michael Hoover’s deceptively simple set. One door doubles for the entrance to both the speak-easy and the police station. An enormous gray rendering of a Hamm’s Beer label (with an artful tear you can spot in another corner of the set) provides a gently sloping back wall and central floor stage space. But it’s also a movie screen, and then when Paul Epton’s lights work their magic, it’s also a scrim behind which still more action takes place. Over on the other side of the stage, three doors allow the criminal element to enact their own low brow farce. There’s a lot of action crowded into the Theater Garage space but it strangely never feels cramped. In fact, the boundaries between the areas are so fluid, the action plays out in a way that almost feels spacious. Johnson’s staging keeps the human traffic flowing in a way that’s all the more impressive for not drawing a lot of attention to itself. The real “how’d they do that” questions don’t sink in until after the story finally loosens its grip on your brain.

“I regret to inform you you are not translucent.”

I could go on about Lynn Musgrave’s lovely sound design, or the giddy fun of those horror film recreations by MetaSyntheses Films, or how Middleton’s script consistently brings a modern sensibility to the personal politics of a bygone era without showing the slightest strain, but honestly, just go see the darn thing for yourself. Torch Theater’s production of Prints is the kind of theater that revels in being theater. It’s the kind of storytelling that only happens in the moment. It’s loads of fun to have the story told to you, and it’s loads of fun watching them do the telling. That twinge of inevitable jealousy makes me want to hate John Middleton, just a little. But I’m having too good a time. Dammit.