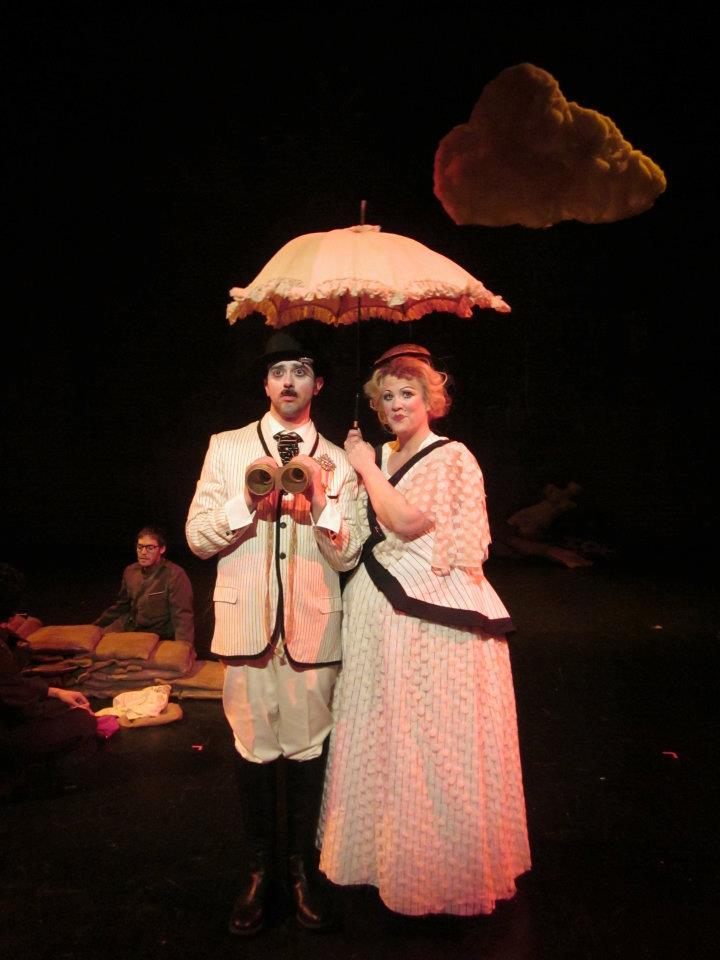 Billy Mullaney, Diogo Lopes, and Maren Ward in Picnic On The Battlefield - photo courtesy of Theatre Novi Most

As a big fan of Theatre Novi Most’s last outing—their retelling of the Gilgamesh epic, The Oldest Story In The World—I jumped at the chance to attend their latest production, Picnic On the Battlefield. Just like most Novi Most offerings, Picnic On the Battlefield is wildly different from all the productions before it, yet still shares Theatre Novi Most’s blended personality of Russian and American theatrical sensibilities.

“Am I supposed to throw the grenades in front of me, or behind me?”

This time, the blending of cultures is even more extreme as they’ve created a mash-up of two absurdist one act plays—one from Spanish playwright Fernando Arrabal, the other from Polish playwright Slawomir Mrozek. Co-director, and Novi Most co-founder and co-artistic director, Lisa Canner joked in a video trailer that the two writers would probably sue if they knew Theatre Novi Most was not just producing their plays side by side, but integrating the two of them together into a wholly different full-length evening. While, as a writer, I can certainly understand that litigious impulse, I like to think that on viewing the play that results, the two authors would be satisfied that each play was still respected, and each play’s thematic message still comes across loud and clear. It’s a tricky project to pull off, but Theatre Novi Most never does anything the easy way.

“You mustn’t be surprised of anything during wartime.”

The first act is primarily Arrabal’s play, also entitled Picnic On the Battlefield.  A young soldier (Billy Mullaney) guards a lonely outpost during wartime, ducking occasional bombing runs from planes and watching for signs of the enemy forces approaching. The soldier’s parents (Diogo Lopes and Maren Ward) decide to bring him a picnic lunch and keep him company. A frightened young enemy soldier (Majid Mokhtari) wanders by and is taken prisoner, though he quite quickly becomes part of the friendly picnic lunch as well. Two stretcher bearers (Jason Ballweber and Christopher Kehoe) keep passing through, frustrated by the lack of dead bodies to take away. Unnoticed by the others, the figure of a veiled woman in white (Carly Wicks) appears on the edges of the action. Is she a warning of impending doom? A memory of a girlfriend loved and lost, or still waiting back home for either of these soldiers to return? The act comes to an unsettling conclusion, and the audience is left to wonder, “What the heck is act two going to look like?”

“It’s not good manners to bring your rifle to the table.”

Since the second act is built within the framework of Mrozek’s Enchanted Night, it begins looking like a wholly different scenario. Two businessmen (Ballweber and Kehoe, once more) settle into their hotel room for the night, troubled by an errant bedspring and the noise of passing trains outside their window, which prompt nightmares. There is also an elusive woman in white here (Wicks again). There are some hints of dialogue throughout that mirror exchanges in the first act, but it is in the men’s nightmares that the visions of war and the characters from Arrabal’s play truly invade the story of the second half of the evening. Larger notions of reality and identity are thrown into question. It’s as if Kafka or Camus had scripted a play for Abbott and Costello.

“That’s what they all say: No one’s dead and they didn’t do it on purpose!”

The hybrid Picnic On the Battlefield is funny in the sense of prompting much laughter, and funny in the sense of being quite peculiar. Both of these are a good thing. It’s either the most hilarious nightmare or the most horrifying comedy I’ve had the privilege of watching in recent years. It’s wacky and it’s dark. It’s bawdy and it’s violent. The production is constantly throwing diametrically opposite experiences up against each other to see what unique end result they’ll create.

The actors are backed up by the design here in helping make co-director (also a Novi Most co-founder and co-artistic director) Vladimir Rovinsky’s adaptation of the two scripts into one feel like a cohesive whole. Amanda McGee’s distinctive costume designs for each character allow just the appearance of a character onstage to make a statement to the audience before the actor even opens his or her mouth. The sound design by Rovinsky and Aaron Schoenrock fills out the unseen world that surrounds these characters and gives the story a broader context which grounds even these absurdities in something resembling our reality.

Just as one story bleeds into the next, Annie Katsura Rollins’ set design does as well. The sandbags of the soldier’s foxhole remain in place even after the hotel room beds have been moved in. The abandoned bathroom sink laying on its side amongst junk and barbed wire in act one is simply set upright to serve as the hotel bathroom in act two—with again the barbed wire and other war detritus remaining in full view. The statue or mannequin torso amongst the barbed wire upstage is mirrored in the base of a bedside lamp which is also a female torso (which the two businessmen are titillated by, and which must be caressed in order to turn the lights on and off).

“So you think you can teach your father about war and danger, do you?”

Finally, the fake two-dimensional white puffy cloud which hangs over both halves of the story seems just another whimsical touch. That is, it seems whimsical until Robert Perry’s lighting design takes hold of it. Perry’s vivid use of both blinding white flares and colored light constantly transforms the stage and the passage of the two-part story. And when that white cloud is colored instead a blood red at the end of each act, it has quite an impact as the final punctuation on the tale.

“If this really is your dream, then you must bear the responsibility for it.”

Directors Rovinsky and Channer and their talented ensemble of actors take something that could have been just a surreal exercise or mind game and serve up a production that really socks you in the gut. It’s one of those theatrical experiences that one can’t adequately put into words. Picnic On the Battlefield needs to be experienced firsthand, like all great theater should. Very highly recommended.