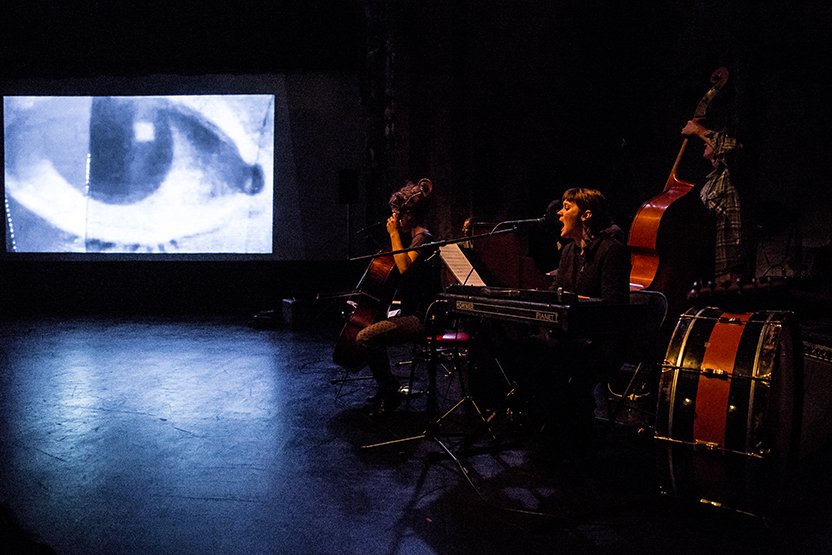 The music of The Poor Nobodys gives context to the modern silent film Panacea in the Twin Cities Horror Festival; photography by Dan Norman

When they described the film Panacea in the publicity materials for the Twin Cities Horror Festival as being in the style of David Lynch, it was a very apt way to sum it up. I recall being in the middle of watching Lynch’s Inland Empire and feeling like I was dreaming, even though I knew I was still awake and aware of being seated in someone’s living room watching something on a television screen. The combination of visuals and the soundtrack were so hypnotic that I began to lose track of the boundary between the thing on screen and in my ears, and the context of me and my place in reality. The work the musical group The Poor Nobodys do with Panacea elicits the same response.

The film is a black and white creation by Crist Dahl and Chris Delisle, two filmmakers out of Rochester who combine their own original visual recordings with found footage to create a very weird pastiche. All sound is provided by The Poor Nobodys. They create a soundscape that begins before the first images appear and continues after the last images have faded from view. It’s a solid, unbroken wall of constant sound that ebbs and flows, providing an emotional underpinning that helps ground the strange profusion of overlapping images.

Christa Schneider and Jenna Wyse layer in haunting vocals over their work on the cello and accordion and electric keyboard. Chris Hepola is just as likely to reach into the guts of his piano and pluck the strings there as he is to play on the keys. Eric Struve’s work on the upright bass is the furthest thing from jazz. And Aaron Cantine, Chris Duba, and Albert Perez aren’t really concerned with a discernible melody whether they’re hitting the acoustic or electric guitar, picking up a banjo or mandolin. It’s more about the mood they’re shaping.

Light often flares out in the film. Focus can be sharp and unforgiving, or disquietingly muddy. Give up on narrative or a search for meaning. There are shadows and reflections, human figures and those that are less than human. A field of grass will yield to the field of a man’s beard, but images often only reveal their true nature at their own languid pace. The Poor Nobodys musical accompaniment can make the masks, puppets and bones even creepier than they might otherwise be. Had the soundtrack been a bouncy and comical one, I wonder what sort of meaning and ominousness one might have applied to the images.

As it is, The Poor Nobodys turn Panacea into a perfect fit for the Twin Cities Horror Festival. It’s a mental palette cleanser that’ll leave you in a strange enough mood to take on whatever goes bump in the dark next on your schedule.