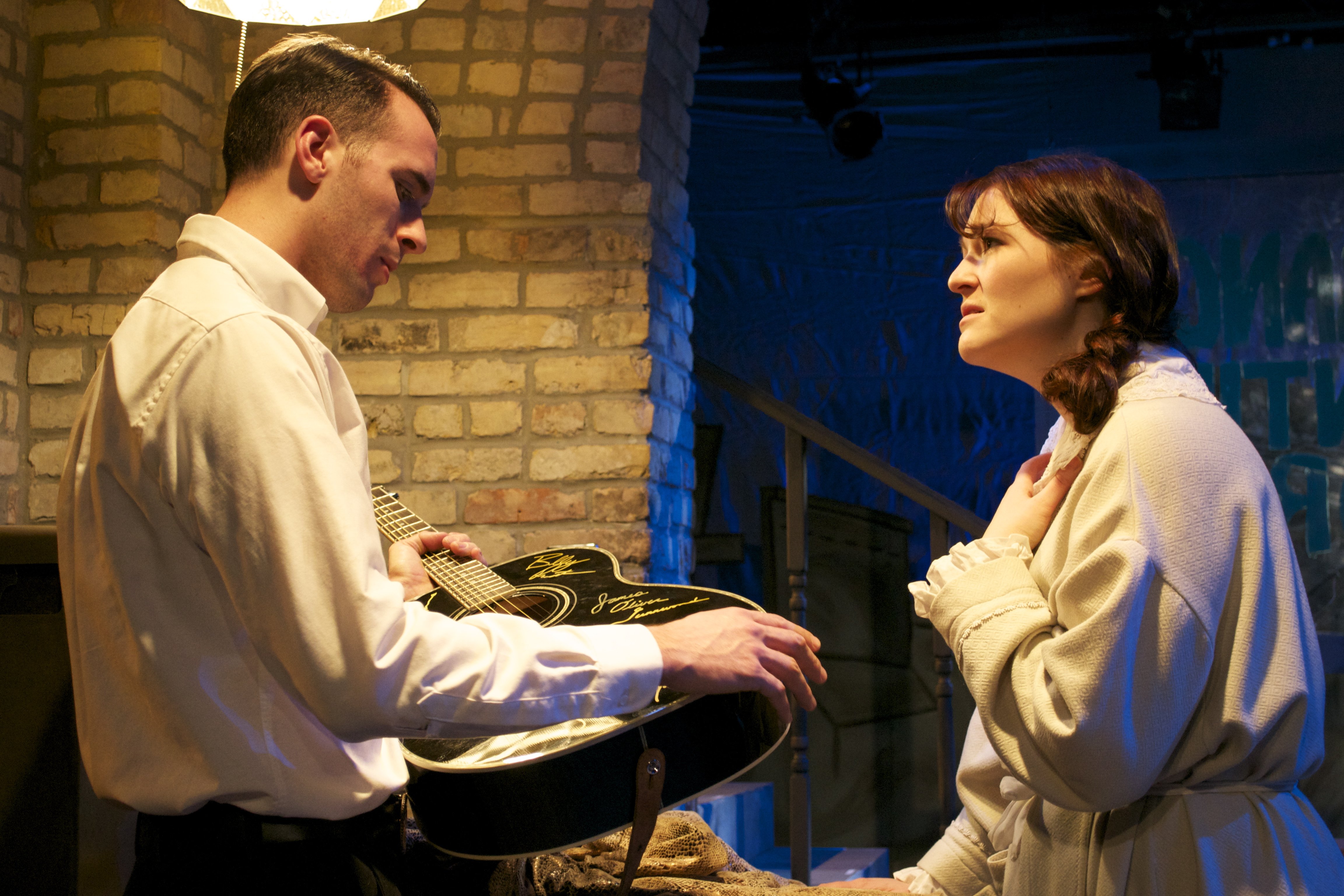 A copy of Tennessee Williams’ drama Orpheus Descending sits on my bookshelf. In a way, I’m glad I didn’t have a chance to pick it up and read it before seeing Six Elements Theatre’s production of Orpheus Descending now playing at Open Eye Figure Theatre. It was a more powerful experience because I didn’t know how it was going to turn out. My own spirits went up and down with the changing fortunes of the characters in the play. Hard to find spoiler-free entertainment these days. I’ll try to keep the twists and turns under wraps for anyone reading this.

“For one night, to sleep on the wind and float under the stars.”

Because you should see Orpheus Descending for yourself. It’s Tennessee Williams at the top of his game, and with an ensemble of 13 actors, it’s not the kind of theater we get to see much anymore. Certainly not in an intimate setting like Open Eye. The close proximity of the audience to the story is another thing that helps increase the story’s emotional punch.

“Unpack the box of Christmas ornaments and put them on me.”

Though there’s a lot of humor in Orpheus Descending, it’s not a comedy. It’s also shot through with generous helpings of Tennessee Williams’ poetic way with words and storytelling. And given that the name Orpheus is in the title, and we’re descending rather than ascending, it’s not giving anything away to say that some characters end up less happy than others. But there’s a lot of romance and hope here as well. Like I said, your spirits rise and fall many times before the tale is done. Orpheus Descending is a real ride for any theatergoer.

“The show is over.  The monkey is dead.”

It’s the 1950s in a small town in the south and a woman’s options are limited. Lady Torrance (Meredith Larson), having lost her father in a tragic fire—which someone deliberately set—when she was a young woman, found herself settling into a loveless marriage to the much older Jabe Torrance (James Tucker).  Years later, Jabe is now deathly ill, but may just be too ornery to actually die.  Regardless, Lady is left to run their general store herself. Needing an extra set of hands to share the workload, she hires a wandering musician named Valentine “Val” Xavier (Phillip C. Matthews), a young man just looking for a place to settle for awhile. Val naturally becomes a magnet for the attention of the ladies of the town, and the suspicion of their men.

“I guess my heart knew that someone was coming to take me out of this hell.”

Tennessee Williams, the clever fellow, sets everything up so the audience finds itself rooting for infidelity. By transgressing, some of the characters can find a little happiness in this oppressive small town environment. Trouble is, when a small town finds someone flouting its rules of conduct, the townspeople can get pretty brutal—both literally and figuratively—trying to put those rebels back in their place.

“That was just an excuse to touch you.  To be not alone for just a moment is worth the pain.”

Director Jenna Papke and the Six Elements company of actors and designers really deliver on the promise of the script. Williams can seem a bit flowery and over the top sometimes, but that’s the world these characters live in.  You have to be willing to go there to make it pay off. This production doesn’t shy away from or apologize for the melodramatic flourishes of the story and the language. The cast revels in it, and immerses the audience in it from the opening minutes so it quickly becomes normal.  It’s only during intermission that you’re reminded the world these days is often a much less flamboyant place. It’s easy to overdo it as well, but the Six Elements crew strikes that tricky balance with real skill.

“You can live together in hate a long time.”

Scenic designer Philip D. Henry also makes full use of the Open Eye space. The general store proper takes up the full stage area, with its half-seen stairways and free-floating doors and windows. But it also spills over to the back lobby next to the stage. Beyond some artfully hung curtains lurks the unseen space where Lady vows to create a nightclub, the sort of place her father once ran, before it was burned to the ground. As Jabe’s condition deteriorates, Lady’s spirits lighten, and her renovation project brings new life to the place. By taking over the full stage space and then some, Williams’ world seems expansive rather than cramped. Nothing is explained away by being “just offstage” in the dark.  You get the feeling if only you were allowed, you might just see back there all the things the characters are talking about when they disappear around that corner. Courtney Schmitz Watson’s lighting design also adds hints of what’s just out of sight.

Special notice has to be given to Meredith Larson as Lady and Phillip C. Matthews as Val, as well as the attention director Jenna Papke no doubt paid to their stage time together. If Lady and Val don’t work as strangers then friends then something more, then the play doesn’t work.  With the script, Williams gives them plenty of rich material, but also a hefty challenge. The audience needs to want things to work out for them, to believe that things could work out for them, and to worry that things might not. Because of Larson and Matthews, the pairing works on all those levels, both for each of them as individual characters, and as a team. Their happiness becomes ours, and any violence they suffer feels like it’s being done to us.

Other standouts in this small town cast of characters include: Melissa Iverson as Vee Talbot, the sheriff’s wife who is blinded by religious visions which inspire her to paint; Heather Quigley as Beulah Binnings, the very definition of a vicious gossip, who launches the play with a story of the fire that changed Lady’s life, and drops hints about where the play might be headed; James Tucker as Lady’s little seen but ever-present sick husband Jabe, a dying animal you do not want to mess with; Danielle Krivinchuk as a super-judgmental nurse; and, doing double duty, Philip D. Henry again, this time on stage as Lady’s first love David Cutrere —the two have an unintended reunion after many years apart that rips open old wounds in classic Tennessee Williams fashion.

“I don’t run with nobody. I was hoping I could run with you.”

Mention must also be made of Reba Clamp’s work as David Cutrere’s wild-eyed dissolute sister Carol. Carol is perhaps Williams’ most over-the-top creation in a play chock full of characters that strain the bonds of reality.  Clamp doesn’t hold back, she really swings for the fences. Carol has no boundaries, so neither does she. It’s a polarizing but fearless performance. I admire Clamp’s work even as I recoil a bit from Carol herself. One thing’s certain, there’s no forgetting her. She’s there at key moments from beginning to end, and though always broken in spirit, she survives when others do not.

“I’m not an optimist but I can’t agree with something as sad as that.”

Six Elements Theatre’s production of Orpheus Descending is good old-fashioned catharsis at its best. The overheated spirit of Tennessee Williams is alive and well, even in the cold of this Minnesota January.