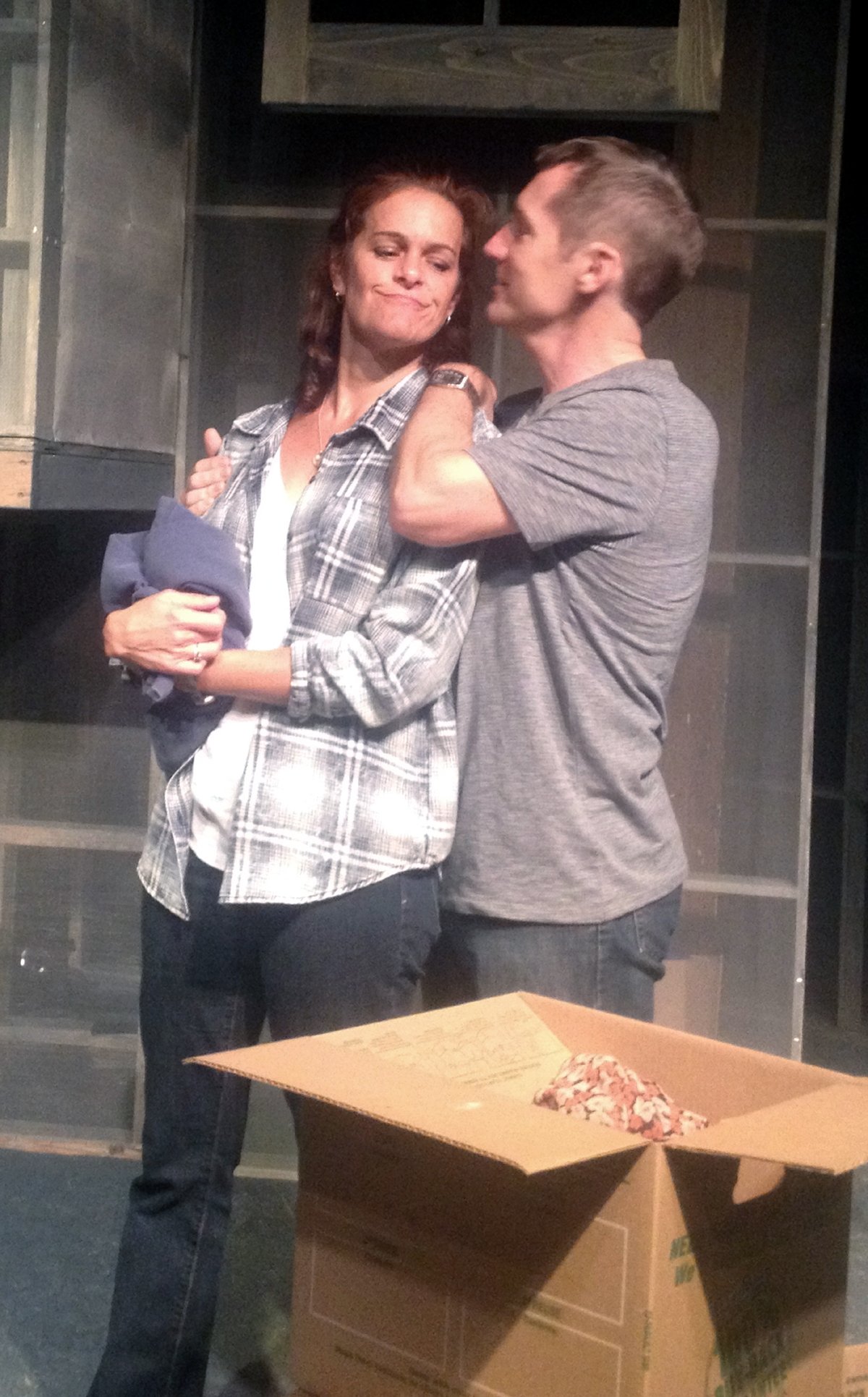 Technically, Nautilus Music-Theater just shifted from the second floor down to the first floor in the same Lowertown building. Still, a move’s a move, and a new space is a new space. Moves can be stressful and a new space can take some getting used to. That said, you really couldn’t tell that Nautilus was opening a new space and a new production at the same time. Just like any other time I’ve walked into a Nautilus presentation, I was completely at ease, knowing I was in good hands. Nautilus’s latest production, Ordinary Days, delivers on the Nautilus reputation and then some.

“I like watching how the sunlight trickles down her shoulders.”

Ordinary Days is kind of an atypical typical musical romantic comedy. Warren (Max Wojtanowicz) and Deb (Jill Anna Ponasik) are thrown together by chance, not once but twice—but he’s gay and she’s straight so that’s not going where you think it is. Jason (Doug Scholz-Carlson) has convinced his girlfriend Claire (Kersten Rodau) to take the next step and let him move into her place so they can spend more time together, and less time traveling between their two apartments, but the comedy of trying to cram two lives into one place comes from a lot of very real and understandable conflicting needs—the desire to be together, but the need to have your own time and space to yourself; the desire to build a new life, but the reluctance to let go of the old one. There’s also a big revelation I did not see coming at all. Claire keeps her cards pretty close to her chest in general but the secret of why she’s so attached to a particular sweater she can’t bring herself to throw away is a doozy.

“A patch of green I’ve only seen from much too far away.”

Ordinary Days is a perfect way to kick off Nautilus Music-Theater’s life in their new home because it crystallizes so many elements of their process of creating new musical theater works. Composer/lyricist Adam Gwon (it still blows my mind all this came out of the mind and talent of one person) went through Nautilus’s Composer-Librettist Studio. After debuting in New York City in 2009, Ordinary Days came through Nautilus’ monthly Rough Cuts series the same year. That talented cast of four performers then are the performers telling the story to us now four years later, under the direction of Ben Krywosz and the musical direction and accompaniment of Mindy Eschedor. (Finding a time when those four in-demand talents were all available, particularly with two of them running their own theater companies, one out of state, has been a challenge. But seeing this production, you can understand why they waited. This is the ideal cast Ordinary Days needed.)

“I wonder what will kill him quicker—the Big Apple, or the liquor?”

Ordinary Days has a lot of balls, frankly, starting with the title. Talk about daring to set low expectations, or daring your audience to dismiss you based on your name. The musical is, yes, about day-to-day life, but it makes the case that all our days, and the moments that make them, are anything but ordinary—if you’re living your life right, that is. Part of me wishes Ordinary Days had a different title, one that drew people in with some air of mystery. It seems a shame that something this good could be overlooked because of a label.

“Don’t give me theories about negative space. Why should I care about what isn’t there?”

Also ballsy is the way Ordinary Days often dared me not to like the characters, or even the setting. Warren wants to be an artist. Oh, great. Deb is hiding out from life in grad school, caught in that never-ending cycle of not quite finishing her dissertation. Fabulous.  Jason is eager to move forward in their relationship, but Claire just can’t commit. What a surprise. And it’s set in New York, because New York is the center of the universe. It’s easy to think you’ve seen this musical before—but you haven’t.

“I think they’re both smiling. It’s hard to tell.”

Because Deb is just the person to stick a pin of reality into Warren’s artsy-fartsy balloon—and Warren is just the person to point out that Deb is so focused on her destination that she’s missing all the amazing details of the journey. Delightfully, neither of these people magically transform through the power of love or friendship. Yes, they change, but they still remain the oddballs they’ve always been. They’ve just got a clearer picture of what they want to do with their lives, and they feel a little bit more comfortable in their own skin. Plus, now they have each other as a reality check.

“It’s strange finding past lives, even when the life is yours.”

Sure, we’re frustrated by Claire’s resistance to Jason. Just like him, we don’t fully understand the reason why. But when we do—wow.

“I don’t remember the Muppets getting hives when they took Manhattan.”

Ordinary Days also makes a genuine case for why people love New York, and stay in New York, sometimes against all reason. It doesn’t take New York’s central place in American life for granted. It shows us the ways in which a city, any city, has its own personality, and how it affects the people who live in it. In addition, both the musical itself and the staging by Nautilus give us a real sense of the size of New York—even in a tiny black box studio. Don’t ask me to explain exactly how, but I felt it. Also, Claire’s big secret is all about New York in a way that is both specific and universal.

“I’ll never grow as tall as these buildings. I’ll never quite reach the sky.”

Still more balls: the structure of Ordinary Days refuses to be…well, ordinary. Warren and Deb’s story crosses paths with Jason and Claire’s story at several key points, but these two couples never truly meet and get to know one another. It points to the interconnectedness of all our lives. You can impact someone’s life, or they yours, without fully realizing it. Be careful with the choices you make, and the things you put out into the world. You will never fully know how they land. Also, Claire’s big reveal to Jason sharing the stage with Warren and Deb’s big epiphany…that could be the end of the play. Instead, Ordinary Days has one more scene: a quiet little scene of Warren and Deb returning to the art museum where they met, and Deb finally starting to see the details inside a deceptively simple painting for the first time.

That’s what the musical’s about. That’s what life’s about. I love the little quiet moments like that. They refocus your entire experience of something. (Normally, I can’t stand plays about the significance of Art with a capital A. Here again, Ordinary Days skips nimbly around the edge of that abyss without falling in: it’s not about the art, it’s about the people.)

“Though I look there every day, I’ve never found the entrance.”

It’s also risky when a play tries to inject recent historical events into its plot. It can end up cheapening or reducing the scope and impact of the events if it’s somehow all about these characters and how it affected them, rather than, say, the rest of the world. However, here, for the first time, I can honestly say as an audience member that this strategy worked. No one’s more surprised than I am that this is the case.  Chalk up another point for Ordinary Days and its balls.

“Then for no good reason, I look up.”

Is it a little disappointing that a guy wrote this and both the female characters are huge neurotic messes while the male characters ground them in what’s important in life? Yeah. Ordinary Days counteracts this trope a little bit, but not as much as it probably should, in light of how it so gleefully subverts so many other standard expectations of musical theater while continuing to be so wonderfully entertaining.

“The space between the moment we’re in and what lies ahead.”

The voices. Oh my God, the voices. Wojtanowicz, Ponasik, Scholz-Carlson, and Rodau are each in their own way fantastic. They make it look so easy. If you’ve seen any musical theater at all, though, you know it’s not easy. Not a bum note. Not a moment when you feel them straining. Time and again, song after song, they just blow you right out of your seat. Not just with volume, either, though they can belt the big moments with the best of them. The nuance of the quieter moments is equally well played. The evening is almost entirely music. Songs are the dialogue. Songs are the fights. Songs are their inner thoughts. To be in such an intimate space, so close to such vocal powerhouses, is a treat you don’t want to miss. Of course, it wouldn’t be nearly as fun if the songs didn’t measure up to the artists, but with Ordinary Days, they do.

“So I come up here every day and I watch the landscape shifting.”

Oh, and the actors may get a break here and there when someone else is singing, but the music keeps going. That means for 90 minutes the one person who doesn’t get a break is pianist Mindy Eschedor. Stunning.

“Your penmanship crackles with rage…Your lack of hesitation, your violent punctuation.”

It’s killing me not to talk about the big penultimate scene because, for a show without a lot of visual flourishes, Krywosz stages something as simple as falling pieces of paper in a manner that resonates in several different ways at the same time. The layers of meaning in that moment unfold so simply and powerfully, it’s a testament to how much you can do with very little. From the plain, yet massive, two-level set by Victoria Petrovich (who also did the costumes), to the simple but evocative lighting by Michael Wangen, Nautilus creates just enough of an environment in which the music can tell the story, without ever getting in its way.

“For beautiful to happen, the beautiful has got to be seen.”

It’s easy to say, but it’s true. Ordinary Days is anything but ordinary. You should see and hear it for yourself. Very highly recommended.