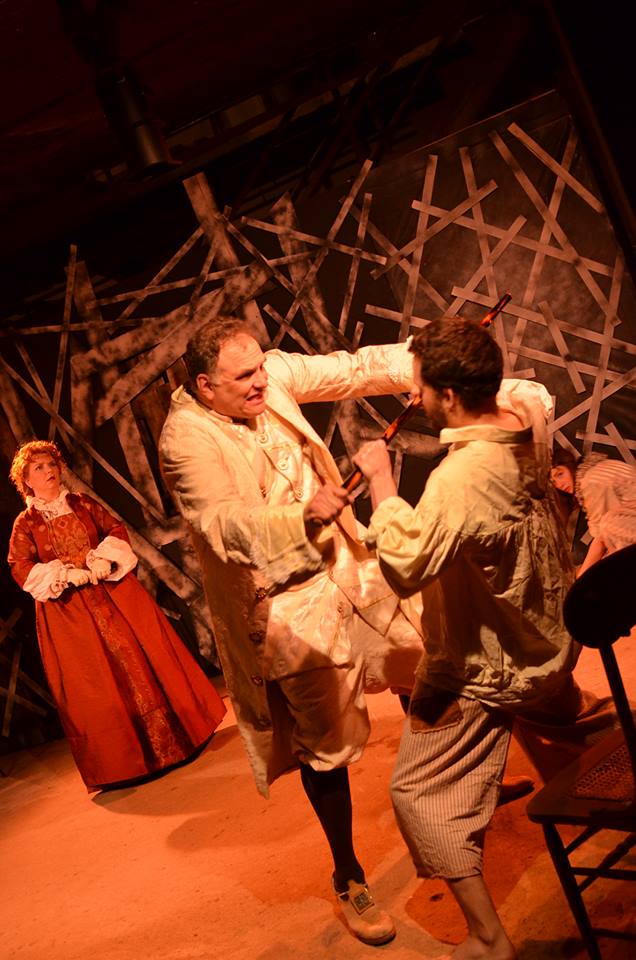 I love playwright Naomi Wallace, but she’s an odd duck. Or maybe I love Naomi Wallace because she’s an odd duck. Her scripts are always poetic and funny and smart and sexy and more than a little disturbing. Theatre Coup d’Etat’s current production of Wallace’s One Flea Spare, like the American premiere of her play The Inland Sea I saw staged at Macalester College, is set in historical England of several centuries past.

“What are you doing out of your grave?!”

The two plays couldn’t look more different. The Inland Sea was a sprawling enormous production with a dazzling design and an ensemble of sixteen. One Flea Spare is a much more intimate, simple affair, with a cast of five, largely focused on a central quartet of performers. Underneath the surface, however, both One Flea Spare and The Inland Sea wrestle with differences of class, gender, education, age, and sexuality—all of Wallace’s favorite topics to shove in a blender and see what results.

“He had skin so fine it was like running my hands through water.”

One Flea Spare (from a John Donne poem, in case you’re wondering about the title) takes place in London during the last great eruption of the bubonic plague (the “Black Death”). Mr. William Snelgrave (Jim Ahrens) and Mrs. Darcy Snelgrave (Ellen Appel) have been quarantined in their home because two invaders, a young girl named Morse (Briana Patnode) and a sailor named Bunce (Peter Beard), have each managed to break in on the same night. Since it can’t be trusted that these two young people aren’t diseased, the watchman Kabe (Brian Joyce) marks the house.  Nobody is getting out again for a month, by which time everyone inside will have proved themselves healthy and no threat to others – or they’ll be dead of the plague. (Worst. Reality TV Show. Ever.)

“With both hands he plunged beneath my ribs and took hold of my heart.”

The Snelgraves are wealthy, but all their servants are dead, which is inconvenient for a number of reasons (especially for the servants). They put Bunce to work scrubbing the floors. They also engage both Bunce and Morse in all sorts of incredibly awkward and inappropriate (and amusing) conversations just to pass the time. You’d think this conceit would get old quickly but the way Wallace keeps shuffling the different combinations of the four trapped principle players, and the number of unexpected twists and turns the discussions take keeps the whole scenario fresh and unpredictable. Once the haves and have-nots start mixing, all the relationships are up for grabs. The rich homeowners start out having all the power, but things don’t stay that way for long.

“A good knot is like a dead man’s heart. You can’t break it.”

Director James Napoleon Stone and his cast don’t let any opportunity for ratcheting up the tension, or humor, go unexploited. This pressure cooker of a situation means that violence is just as likely to happen as sex, perhaps more so. In fact, if the actors were the age Wallace indicates they are, the production would be even more unsettling that it already is.

“I can still smell them, after 36 years. The horses—burning.”

The Snelgraves are described as elderly. While Ahrens and Appel are the “elders” of this production, they are by no stretch of the imagination elderly. Likewise, Patnode is young, but not twelve years old. Morse allowing Kabe to lick her toes, for instance, would be more playful on her part, and more creepy on his part, if she were actually a twelve year old. If the Snelgraves looked older, their frailty would be more pronounced, and threat of violence more unexpected. Also the contrast in scenes of sexuality bringing Mrs. Snelgrave and Bunce together would really turn some people’s heads around.

“It was never about who you were. It was about what was left of you.”

Of course, even without the plague in 17th century England, people’s life expectancies were a lot shorter than they are today. Maybe a couple of Snelgraves in what we consider near middle age now would really be pushing the end of their days back then. Perhaps a girl of twelve working her sexuality as well as her innocence for all it was worth back then wasn’t considered out of bounds. It’s hard to keep those sorts of historical/cultural translations in mind sometimes. It’s kind of beside the point, however, since the cast of One Flea Spare maximizes the potential for making the audience squirm as much as possible. I should perhaps be grateful that the extremes of age were not also in the mix here.

“Think of it as walking across the hands of children.”

Like I said at the top, I really love Naomi Wallace’s plays. She always keeps me on my toes, keeps me guessing, keeps me wondering where the heck the play is going to go next. Poetic turns of phrase bloom in the unlikeliest parts of conversations in ways that make me catch my breath. I never wonder if the writer knows what they’re doing. I always feel like I’m in the hands of a good storyteller.

“A tongue so cold, it covered my body in frost.”

When you couple that with a theater company that knows how to dig in and find all the nuances lurking underneath a seemingly simple situation, you end up with a fine piece of live performance. It reminds you that sometimes all you really need are the actors and the words (and costumes, of course. Not only aren’t they nude, but Barb Portinga’s period clothes, particularly for the women, are quite nice, even if they are stuck in a plague house). If you’re a fan of well-crafted plays done well, you should definitely head down into the basement of the Soap Factory and see Theatre Coup D’Etat’s production of One Flea Spare.