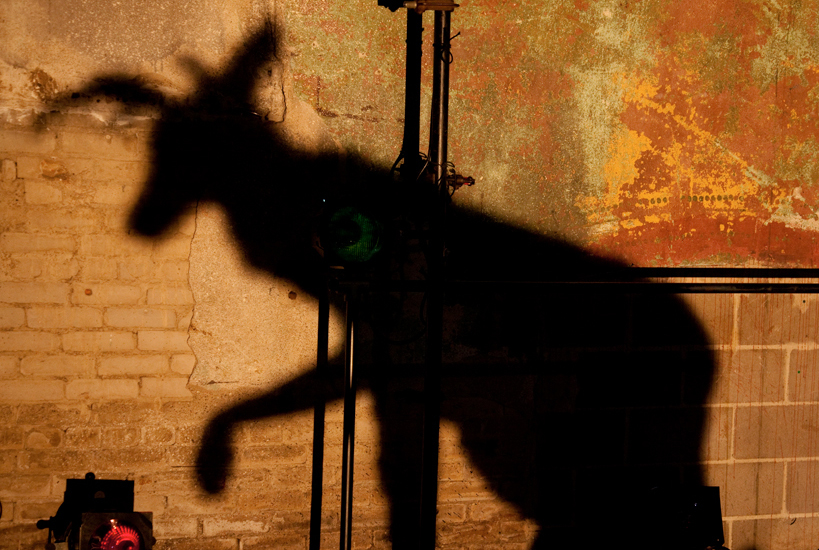 How much fun must it be to be able to put the role “Goddess of Death” on your resume? Or “Gilgamesh”?

That fun is currently being had by the folks at Theatre Novi Most (Theatre of a New Bridge) with The Oldest Story in the World, their 90-minute retelling of the epic of Gilgamesh, at the Southern Theater. Fun is also very much being had by the audience. Theatre Novi Most, and director/co-founder Lisa Channer, prove with Oldest Story that if enough people put their heads together, and they let it percolate long enough, you just might end up with something brilliant.

There is adventure. There is amazing singing. There is sex. There is death. There are gods and monsters. There are special effects (both high tech and low). There is homoeroticism on a grand, moving scale (or, if you prefer, an epic buddy movie). There are enormous scorpions. There is time travel. There is nudity. There is fantastic lighting and a whole other world of sound. There are human bodies doing dazzling things that often don’t seem physically possible. The Oldest Story In The World is a hell of a wild ride. It’s lively and fun (there’s that word again) and surprisingly sexy for something written over 2,600 years ago.

Of course, the text of this version was written a bit more recently by Kira Obolensky, helping crystallize a collaborative creative process that’s been going on since 2004. The ancient tablets on which the Gilgamesh epic was written are personified by the composer/singers of those amazing songs: Sasha Gibbs, Molly Dworsky, and Johanna Gorman-Baer, decked out in the gowns of a 60s-era girl group, with cuneiform scribbled all over their exposed skin. The talented young ladies (all still in college) are a living, breathing part of Vincent Oliveri’s mind-boggling sound design, and an ongoing soundtrack to the adventures depicted in the story. They cry out and take the emotions of the characters to the next level, giving added depth to what the audience hears and sees from the rest of the acting ensemble.

Aruru, Goddess of Creation (Barbra Berlovitz); Shamash, God of the Sun (Vladimir Rovinsky); Ea, God of the Sky (Dario Tangelson); Ishtar, Goddess of Sex and War (Julianna Drajko); and Ereshkigal, Goddess of Death (Vanessa Voskuil) all get together and build the king of Uruk, a guy named Gilgamesh (two-thirds god, one-third man, 100% Erik Hoover). Since, with that pedigree, Gilgamesh can be a little too proud and arrogant for his own good, the gods decide to send him a boyfriend. Er, guy friend. The gods describe him as a “soul mate,” and I’m not gonna argue. Gilgamesh’s new best friend and sidekick is one Enkidu (Billy Mullaney, two-thirds animal, one-third man). [See, this is why dating is difficult. I’ve got the formula wrong.] After Enkidu is tamed with a little sexual healing courtesy of the seductive Shamhat (Voskuil again), and given some clothes, he is sent off to interrupt the beginnings of yet another barroom brawl instigated by Gilgamesh.

Gilgamesh and Enkidu immediately butt heads (chests, arms, legs, pretty much every body part that can get into a fight). They trash the place, make a run for it, bond as manly men do, and set off in search of adventure. They stick close to one another on the journey, and Enkidu soothes Gilgamesh through several nights of troubling dreams (the product of Robert Parry’s lighting and Daniel Vatsky’s multimedia). They reach the last tree of a fallen forest guarded by a monster who is “all the evil in the world.” Despite Enkidu’s misgivings, Gilgamesh burns that last tree and monster to the ground. But not before the monster places a curse upon their heads.

The curse tears the buddies apart. In trying to reclaim his lost friend and understand “the problem of death and how to live,” Gilgamesh faces off with the scorpion people, and struggles to outrun the sun before morning breaks in order to reach the edge of the world where the only immortal human (Tangelson again) and his wife (Berlovitz again) live.

In the middle of all this is an intriguing detour, because Uruk is an ancient kingdom on which the modern country of Iraq was built. The ancient artifacts and stories of the culture were being gathered in Iraq’s museums, but then Iraq was subjected to a little “shock and awe,” society came unglued, and the museums and archeological sites were looted for their treasures. Karen Dunning (Jeanne Wilcoxon) is holding down the fort at one such museum, trying to save the collection, when Gilgamesh breaks in. Anne Katsura Rollins’s costume design largely consists of a delicate palette of tans and browns and beiges. Somewhere between the bar fight and the journey to the monster, Gilgamesh and Enkidu in their khakis and tank tops also pick up a set of dog tags around their necks. It’s a little thing, but suddenly we’re not so sure what war they’re fighting anymore. It’s a great cue to allow the story to get unstuck in time. But just like the destruction of the last tree isn’t a heavy-handed eco-friendly fable, this blending of battles ancient and modern isn’t a clunky political allegory. The production just lays it out there, and lets the audience figure for themselves what to make of the similarities in the human condition across the centuries.

Another museum (of the late 1800s) surfaces several times, including right at the start, with George Smith (Stephen Pearce) as the audience’s entry point into the story of Gilgamesh. Smith was the man who discovered the first scraps of the epic hidden for years among layers of other artifacts, with a flood story that predated the one in the Bible. The search to unearth more pieces of the story would bring Smith fame, and (of course) his undoing. The whole stage environment, designed by Adrian Jones, is a curiosity shop full of file boxes, TV screens, books, ladders, papers, filing cabinets, chairs, scientific beakers and other clinical glassware, surrounding the characters and the Southern’s ramshackle stone proscenium arch from floor to ceiling. Add in some mounds of black sand, and a remarkably versatile burlap curtain (doubling as mountains and oceans, among other things), and Novi Most works nearly every corner of the Southern to create worlds that end up being timeless whether they’re ancient or present day.

Acting ensemble, design, direction, words and music—The Oldest Story in the World makes it all work together to create one seamless, magical whole. It’s bewitching, and provides plenty of material to think and talk about long after you’ve left the theater. Very highly recommended.