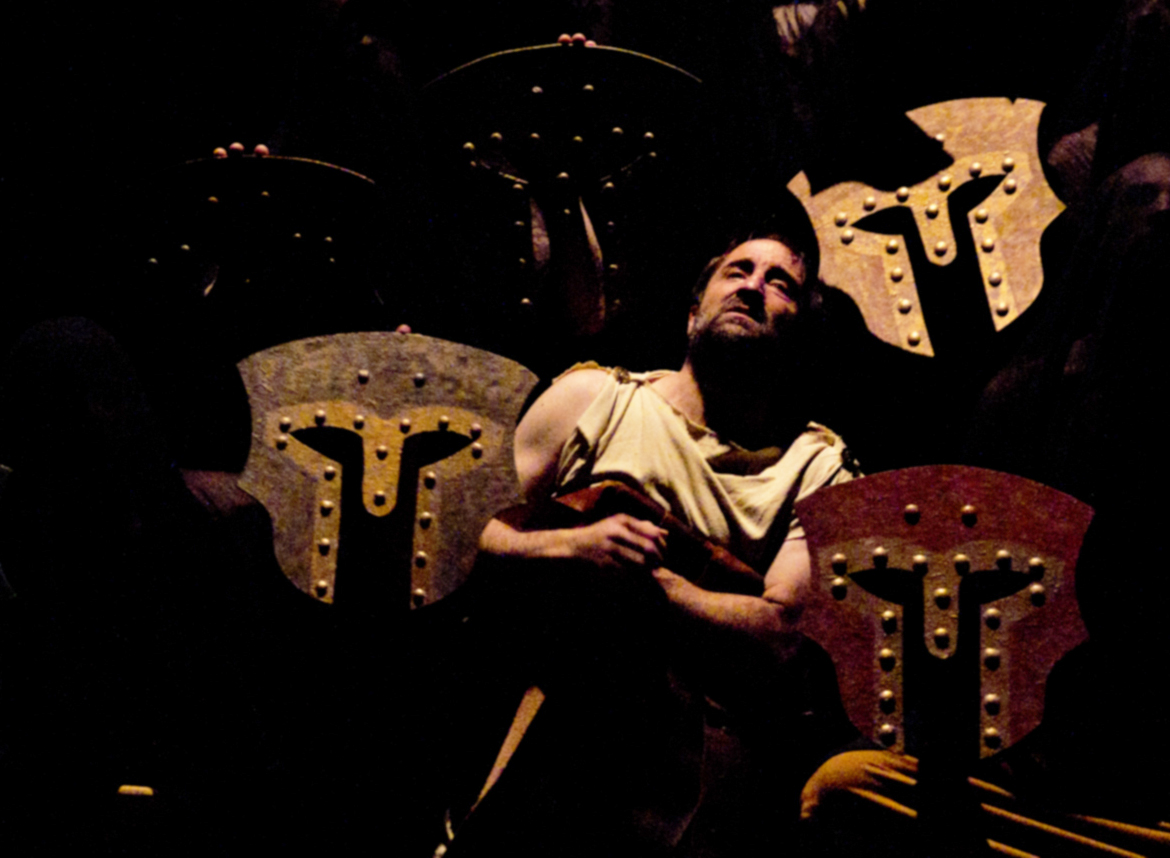 There are a number of things that confuse me about Park Square Theatre’s production of William Randall Beard’s adaptation of Homer’s epic adventure The Odyssey. But they all feed into one central point of confusion: Why doesn’t it work?

Because it should work. The story of The Odyssey has survived for centuries because it’s a compelling narrative. The crafty hero Odysseus (JC Cutler) is returning home from the Trojan War (where, among other things, he provided the Trojan Horse strategy that helped his side win). Running afoul of the ancient gods, Odysseus and his crew are imperiled by one monstrous setback after another, meaning that the journey home takes ten years, as long as the war itself. Meanwhile, Odysseus’s wife Penelope (Jodi Kellogg), waiting back home in Ithaca for her husband to return, must try to hold the kingdom together while also fending off the unwanted attention of numerous suitors angling to take Odysseus’s place as the new king. Odysseus’s and Penelope’s son Telemachus (Sasha Andreev), grown from an infant to a young man while his father has been off at war, struggles to find his place and purpose in the hostile world which surrounds him.

Beard’s decision to adapt the story as three separate plot threads—father, mother and son—that interweave over the course of the evening, finally coming together at the end in a much anticipated reunion, is a solid strategy. And you couldn’t ask for three better leads than Cutler, Kellogg, and Andreev. The trouble seems to be in the three stories themselves. None of them really drives forward powerfully from one incident to the next. Penelope seems to spend much of her time stalling, waiting for Odysseus to get home. Telemachus bounces around a bit and encounters an interesting array of characters, including the infamous Helen of Troy (Nora Montanez), but his actual transformation from boy to man seems to take place offstage during intermission, rather than onstage where it would be of the most use. Poor Odysseus’s battle to make the journey home feels hopelessly muddled. A series of things happening one right after the other isn’t the same as a story.

The Odyssey is not only one of the oldest surviving stories of Western literature, it’s also one of the first non-linear stories ever told. It starts in the middle, with a man washed up on a foreign shore, far from home. That man turns out to be Odysseus. Once he reveals his identity to his rescuers, he then recounts the tale of how he started out victorious from Troy with a dozen ships and many men, but ended up the only one to survive. Now that’s a set-up for a story. It’s possible that taking the tale apart and turning it into a strictly linear narrative could work, but here it only seems to suck all the drive out of the story.

Another perplexing choice by the production is the decision to turn one of Odysseus’s main adversaries, Poseidon, god of the sea, into nothing more than a sound cue. Shawn Hamilton, the voice of Poseidon, was also the embodiment of Zeus, king of the gods, onstage. But Zeus never really did anything that affected the outcome of the story. He just hung around on the side of the stage watching the action, making the occasional comment, letting Athena (Adia Morris) do most of the heavy (supernatural) lifting. Not that Hamilton’s voice wasn’t imposing and threatening, but if the actor’s right there, why not use him? Particularly when it was Poseidon that Odysseus kept ticking off, and Poseidon who threw up most of the roadblocks to Odysseus’s journey home.

Beard is an intelligent writer, well-versed in his subject matter. The characters are constantly saying all manner of clever things about the state of humans and the gods and life. There are a lot of catchy lines here, but unfortunately not a lot of dialogue. The characters spend most of their time talking at rather than with each other. If it’s not clever turns of phrase, then it’s exposition. So it’s hard as an audience member to get to know the characters as people, or invest in their relationships, or worry about the incidents that befall them. It’s a script right now that reads better than it plays. The scenes that work best are the ones where people actually converse. A notable example in that vein would be when one of Penelope’s suitors (Eric Sharp) makes a genuine offer to help her keep her enemies at bay. More talk, less declaiming.

Director Richard Cook and fight/movement Choreographer Doug Scholz-Carlson incorporate some interesting experiments in physical theater throughout the production. The encounter with the Cyclops makes amusing use of an enormous puppet. The bulk of the cast gathers and creates Odysseus’ sailing ship with their bodies, scattering and reforming in the midst of a storm to present us with different angles on the struggling seacraft. When Athena masquerades as a human benefactor to our heroes, she tucks herself right behind the guy, moving his arms with her own, her voice coming out of his moving mouth (the human puppet in this case was Dale Pfeilsticker: a great character actor, criminally underused here). But the physical work isn’t integrated consistently throughout the whole production. Half the time, it’s still a standard theater production. Which results in strange juxtapositions such as: there is a tray full of food props, but any liquid like wine is mimed by the actors; the men have shields, but they mime their invisible swords. Choices like this make good production sense (liquids are messy, swordplay is dangerous), but they also sometimes make for confusion onstage.

The good news is that a lot of great actors (20 in all) are getting a steady paycheck for a few weeks. It’s a shame they weren’t allowed more of a chance to really act.