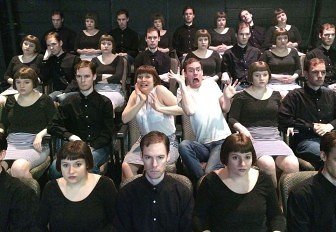 They don’t hand out the programs until *after* Fire Drill’s latest production, Novelty Shots: A Political Fantasy, is over. It’s deliberate, but I’m still not entirely sure why. Do they not want to spoil the surprise?  What is the surprise? Is any review like this one just going to be a massive pile of spoilers? Is it even possible to spoil this show? Honestly, I could tell you everything that happens and I still wouldn’t be telling you what happens. Novelty Shots is one odd duck, but like everything else I’ve seen of Fire Drill’s, it’s a duck I like very much.  Can I tell you why? Well, that’s the tricky part, isn’t it? (The fact that I’ve used a half dozen question marks just in the first paragraph is probably a useful metaphor.)

Maybe they felt if we noticed the list of artists involved wasn’t solely Fire Drill (Emily Gastineau and Billy Mullaney) but a total of nine performers listed in the program (additionally, Charles Campbell, Samantha Johns, McKenna Kelly-Eiding, Eric Larson, Megan Mayer, Ross Orenstein and Jeffrey Wells) we’d start wondering when all the rest of them were going to show up.  After all, the opening sequence of the evening starts out with just Mullaney onstage by himself, for a period of time that starts to feel very elastic and undefinable. But, boy, when the rest of them show up in the second half, they really show up.

Maybe they felt if we read the performer’s bios, it would give away the spirit of whimsy bundled up in a (sometimes intimidating) discussion and deconstruction of just what the heck live performance is – how some people do it and how other people watch it (and how we should be examining – and poking at – both sides of that equation).

Maybe they thought all the quotes in the program would get us thinking too much – establishing expectations, however benign, that they had no intention of addressing. Laying too many words on the concept ahead of time normally has me rolling my eyes anyway. For instance, the publicity blurb on the postcard says the show “takes the truism that ‘the internet is rewiring our brains’ as both paranoia and reality.’ You want to get to me to walk in the opposite direction of where the theater is located?  Mention the internet and theater in the same context.  So why did I go?  It’s Emily and Billy.  Fire Drill takes things I think are unperformable and turns them into a performance.  I still have no idea exactly how they do it.  Like poets and dancers, their brains are wired differently than mine.  Like poetry and dance, I can’t often find the words I need to adequately describe the experience I have watching it – or why you should also watch it.  But I try.

The postcard continues: “Using rigorous exploration of form, daring physicality, and an uncompromisingly contemporary aesthetic, Novelty Shots capitalizes on our collective desire for constant stimulation.” To which my inner drag queen, if I had one, would be saying something like “Bitch, please. Dial it back.” Yet, after having seen it, I can’t say the postcard’s wrong.

Fire Drill also knows it’s working in the midst of a very long continuum.  One of the quotes in the program says, “The existence of mental and nervous degeneration among a growing class of people, especially in large cities, is an obvious phenomenon… the mania for stimulants… diseases of the mind are almost as numerous as diseases of the body… this intellectual condition is characterized by a brain incapable of normal working… in a large measure due to the hurry and excitement of modern life, with its facilities for rapid locomotion and almost instantaneous communication between remote points of the globe.” Which sounds like an indictment of or a lament about our overstimulated modern society, until you look at the attribution, and realize it was written for the evangelical Anglican academic journal The Churchman – in 1895.  No, that’s not a typo.  It’s not supposed to be 2015, or even 1995.  1895.  Technology has been scrambling our brains for centuries now.  And we still do theater. Probably as a defensive action.

Spoiler alert – there is at least one, possibly two, gun(s).  One of them goes off.  (Chekhov would probably back me up on revealing this.)  I’m not counting the super-soaker water bazooka.

We start focused on a human voice. A human face. Then a body.  Then another body joins it.  Mullaney repeats the phrase “The situation is if I repeat myself long enough you’ll get used to it.” And he’s right.  Because the more he cycles through those 14 words, the more we become acutely aware of every change in inflection, every alteration of volume or speed, every pause, every added or substituted word.  They stand out in ways we might otherwise miss in another context.  Then, as patterns of movement are established, disruptions of those patterns are also thrown into the mix.  All this is doubled when Gastineau joins him.

The second half of Novelty Shots starts again with the Fire Drill duo, but one by one the rest of the ensemble joins the stage picture.  We start again focused on words, this time one train of thought repeatedly branching off, and off, and off again, like we’re following hyperlinks from one document to another, expanding out and out and out from the original subject under discussion.  (Just like the people, come to think of it.)  Words never quite leave the stage, but they start to take a back seat to other layers of stimuli. Music, movement, depth, pictures, human bodies and so on. Confetti will be strewn, streamers will be tossed, stuffed animals will be thrown at a wall. An enormous tin of peeled bananas will be devoured, semaphore flags will be unfurled, comical looks of frozen horror will accompany poses of recoiling.  People will slide across plastic, some will retreat to the kitchen and grab a beer, a lectern will grow legs and walk.  There are plastic whistles.  There are calisthenics.  Bells will clang, beach sounds will accompany a screensaver scene of a beach and alter the atmosphere entirely.

The group all at once will engage in competing strategies to get your attention. (Some flesh may be exposed.)  They will flirt, stomp, and cajole you.  They will practically dare you to walk up on stage and break the fourth wall down entirely from your side.  With the right audience, you kind of wonder what happens when someone actually takes them up on it.

In Novelty Shots, Fire Drill has carefully orchestrated a really fascinating grab bag of a performance and enlisted a dream team of performers to help them execute it. It may sound random (apologies), but just when your brain is tempted to think there’s no shape to the thing, the shape appears. There are frequently moments when you have no idea where to look because every corner of the vast Red Eye stage is occupied by someone doing something with a level of intensity that makes it hard to look away.  There’s something a little thrilling about being that overwhelmed with stuff to watch. You don’t watch Fire Drill the way you watch other theater.  Thank God for that.  And thanks to Red Eye’s New Works series for giving Fire Drill a platform to play on.