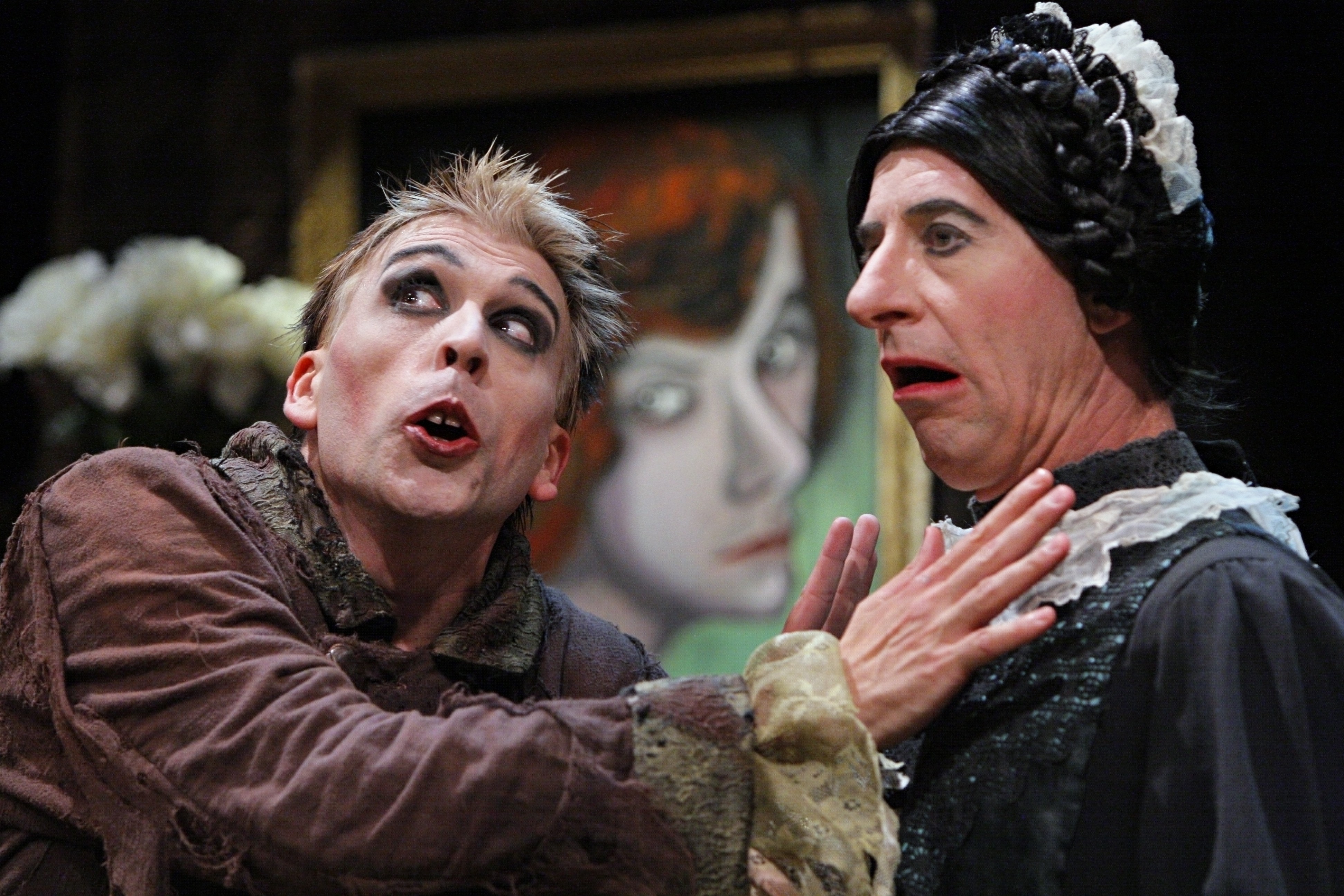 Vampires, werewolves, mummies, Shakespeare, Hitchcock, fart jokes, Ibsen, boob grabbing, Edgar Allen Poe, men in dresses, Gaslight, puppets and stuffed animals of all shapes and sizes—one really has to admire the late Charles Ludlam for sticking everything in a blender and hitting the puree button. Ludlam’s play The Mystery of Irma Vep, currently assaulting the stage at the Jungle Theater, is one hilarious gift basket of wacky camp.

Lady Enid (Bradley Greenwald) comes to Mandacrest, estate of her new husband Lord Edgar (Steven Epp), but finds it less than welcoming. Lord Edgar’s first wife, Irma Vep, still holds sway at Mandacrest years after her death, and the tragic death of her young son. The head housekeeper Jane (also Epp) keeps the spirit of her dead mistress alive in a great many unhealthy ways. The groundskeeper Nicodemus (also Greenwald) doesn’t do so well when the moon is full. Plus, there’s a random vampire (also Epp) lurking around on dark and stormy nights, as vampires do. And that doesn’t even factor in the side trip to Egypt, where local guide Alcazar (also Greenwald) leads Lord Edgar to a flatulent female mummy (also Greenwald) who Edgar conjures back to life. Disguises are ripped away, secret identities revealed, and devious plots aplenty unravel, as they tend to do.

Irma Vep really only requires two people and a lot of inventiveness, which is one of the reasons why it is so frequently produced. At the Jungle, however, they really pull out all the stops.  Directed by Joel Sass, starring Epp and Greenwald, extravagantly costumed by Matthew J. LeFebvre, set by Sass, sound by Sean Healey, original music (a full-on movie soundtrack) from composer Greg Brosofske, lights by Barry Browning—the embarrassment of riches goes on and on. If I mentioned everyone who does exceptional work here, I’d be listing every name in the program. The play is cheesy by design, with a wink and nod, not at all for lack of resources. Ludlam’s inspired lunacy gets the star treatment here.

Epp and Greenwald appear to be having a hell of a lot of (exhausting) fun. After all, how often do you get a chance to cross-dress in quite so spectacular a fashion? The script is not just funny, but extremely smart, as well as extremely naughty. The double entendres fly fast and furious. There are so many quotable lines and outrageous incidents that you almost need to see the play more than once to catch everything—and even that might not be enough. You get the feeling that each moment was painstakingly mined both for its full comic effect, and in order to fully develop each character and their relationships to one another and the story. Meticulous well-trained actors can make the very best clowns.

It’s said that there are 150 costume changes, and I don’t doubt it. The thing that’s most dazzling about the costume changes is that they often seem to defy the laws of nature. Someone disappears as one character and reappears moments later (really, moments later) across the stage as someone completely different. The play also pokes great fun at stalling tactics and filling time (neither of which it ever seems to need) to let the costume changes happen. Oh, and it’s not just costumes. Andrea Moriarity-Dahlberg has designed some hilarious and majestic wigs, and Lucinda Holshue has armed the actors with a full menu of dialects to flesh out the quick change magic.

There are many other amusing strategies for doing all this with just two actors. An actor will stick his head outside a door or cover his mouth strategically as one character, and let loose with the voice of another character in order to carry on conversations with himself. At one point, Greenwald as Lady Enid demands to see Nicodemus (also played by Greenwald). Jane (Epp) has to patiently explain this isn’t possible, until Lady Enid gets it, and says, “All right then, I’ll go to him” and quickly exits. Greenwald also gets ample opportunity to wrestle with puppets—in one sequence doing battle with a vampire puppet and then creating the illusion of carrying himself offstage. (Delightful!)

It’s clear much of the magic onstage wouldn’t be possible without stage manager and prop guru John Novak, plus the Jungle‘s small army of interns backstage assisting in the costume transitions—also occasionally hoisting a monster puppet into view, throwing a life-size wolf past an open doorway, bringing a bleeding portrait to life, or putting a werewolf together one clawed hand at a time. Sometimes the low-tech theater tricks are the most fun. So, a nod to the interns: Andrew Cutler, Janice Geis, Lincoln Rusk, Eli Schlatter, and Jeffrey Shockley.

I struggled for a bit with myself in evaluating Irma Vep. My highbrow internal censor kept saying, “Oh come on, it a parody of melodrama. That can’t be considered great theater.”  But great theater comes in all kinds of packages, and something this entertaining deserves its due. Our laughs are entitled to just as much loving care as our dramas, and when they get it, they deserve recognition. You may see many other productions of The Mystery of Irma Vep in the years to come, but I doubt you’ll see one better than the Jungle’s putting on right now. It’s a sprawling, goofy masterpiece. Very highly recommended.