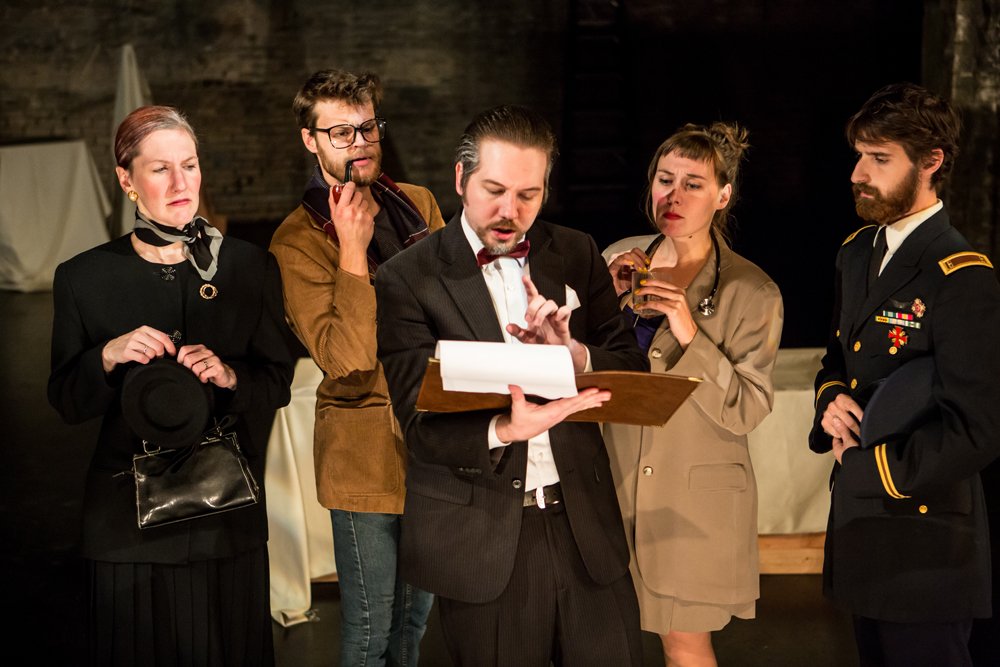 In Four Humors‘ offering for the second annual Twin Cities Horror Festival, The Murderer Did It, seven strangers are gathered in a remote location for the reading of a will. One by one they start dropping like flies. Neither the situation nor any of the people involved in it are who they appear to be at first. Yet the whole thing ties up neatly in a bow at the end, and is hilarious. If I say much more, or even quote too much from the thing, this review will be riddled with spoilers so…

“He wasn’t very public after his wife’s… accident.”

There’s the lawyer (Jason Ballweber), the judge (Jen Scott), the military man (Skyler Nowinski), the doctor (Keely Wolter), the political operative (Matt Spring), the college student (Christian Bardin), and a guy who appears to be lying about his name, his occupation, pretty much everything, and provides his own soundtrack (duhn, duhn, DUHN!) (Ryan Lear). They spend the first few minutes in the dark discovering one another with flashlights and yelping in surprise, which is a bit that sounds like it would get old, but Four Humors knows just how to the play it for all the laughs they can get without beating it into the ground.

Matt Spring’s script is the smart kind of funny you don’t need to feel guilty for laughing at. The Murderer Did It is a trifle, but it’s an extremely well-crafted one – as if Agatha Christie had a fling with Neil Simon and this script was their love child. Director Brant Miller keeps the whole thing moving quickly apace, but never so fast that the audience can’t keep up, which is saying something given the number of characters and the number of plot twists and the number of punchlines.

“The will says it may be shown to anyone who asks nicely.”

This was a great way for me to ease my way into the second annual Twin Cities Horror Festival, and recharge for another late night viewing. You’d think Four Humors would get tired of being such relentless purveyors of well-made comedy, or slack off once in a while, but no, just like many a Fringe-centered group of artists, they just keep cranking out the good entertainment (thank God). Check it out if you get a chance – The Murderer Did It, and the Twin Cities Horror Festival, run through Saturday, November 9, 2013.