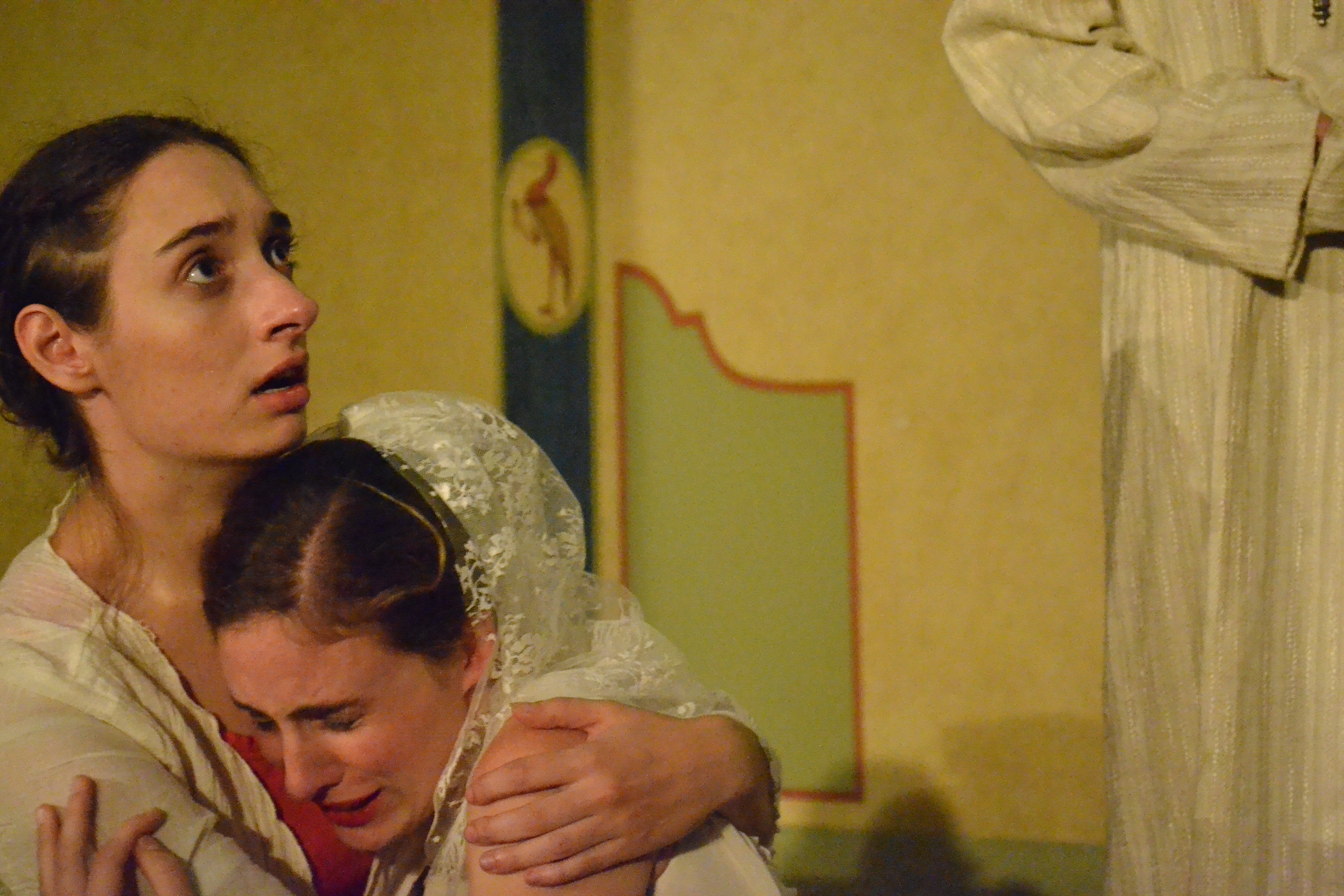 Everybody has their own pet theories about comedy. There are also all sorts of ideas about what in particular makes a Shakespearean comedy work, because Shakespeare’s comedies are odd ducks. If someone gets it wrong, you can think it’s the play’s fault. “Oh, it’s old, the words meant something different, it’s based on antiquated ideas of male and female relationships, no wonder no one ‘gets the joke’ these days.” Then you see a really good production and the lightbulb goes on—”Oh!  Now I understand the play. I’d just been seeing really inept productions before.”
“I wish my horse had the speed of your tongue.”

For instance, As You Like It is one of my all-time favorite plays, not just Shakespeare plays, all plays. But for several years I thought I hated it because I saw one bad production after another. Then I saw a weird little blackbox production of it, WAY off Broadway in New York, with two guys playing all the roles, directed by a former grad school classmate of mine, and the lightbulb clicked on.  “This is a really enjoyable play, when you do it right.”

“One foot in sea and one on shore, to one thing constant never.”

Much Ado has always had some enjoyable elements to it. I’d just grown accustomed to the fact that I was going to have to suffer through other long, unfunny stretches of the play in order to get to the good stuff. Six Elements’ Much Ado is all good stuff. I honestly didn’t think that was possible. It comes back to Jenna Papke’s light touch as a director, keeping things moving along and not allowing anything to get too labored in its presentation.

“For which of my bad parts didst thou first fall in love with me?”

A lot of people who do bad comedy approach it in the manner of someone explaining a joke. They dissect the humor in order to examine why it’s funny, and then forget to stitch up the patient when they’re done. So it dies a long slow unfunny death while they flog the corpse going, “SEE? IT’S HILARIOUS!” Comedy isn’t like math. You don’t need to show your work. Sure, study it, understand it, but then just tell the joke. Let the joke be funny on its own. Don’t wind up and prepare us for the joke and then keep pointing to it afterward. Just tell the joke well and trust us to find the humor. Relax. This production of Much Ado About Nothing has that easygoing manner that makes a comedy enjoyable to watch.

“If they were but a week married they’d talk each other mad.”

Because the play really is much ado about nothing. People get tricked into loving each other and hating each other but once they turn their brains on and actually think for a second, things turn out all right in the end. The young men come back from the war as young men do. The young men’s thoughts turn to love as the thoughts of young men do. Claudio (Zach Delventhal) has his eye set on Hero (Cynthia Hornbeck)—strange name for parents to saddle a young woman with you but there you have it. This being the olden days, if Claudio wants to get lucky, he needs to get married as quickly as possible. Hero’s mother Leonato (Jean Wolff) puts the brakes on that, although she does welcome the troops into her home for the weekend. Come Monday, let’s have that wedding.

“Shall I never see a bachelor of three-score again?”

This, of course, leaves just enough time for mischief of all stripes to complicate matters. Claudio’s two wartime chums Don Pedro (Eric Cohen) and Benedick (Scot Moore) are the angel and the devil on his shoulders speaking into opposing ears. Don Pedro is all for the marriage, even helping Claudio to get Leonato and Hero’s agreement to the match. Benedick doesn’t have much patience for women or marriage, and begs his pal not to rush into things. Don Pedro’s sister Don John (Katrina Radcliffe) takes things a step further, plotting to undo the impending nuptial plans entirely.

“What men daily do, not knowing what they do!”

Don John thinks Claudio is taking up a place in Don Pedro’s favor that should be hers by right, so quashing Claudio’s happiness seems like a fun stab at revenge. With the assistance of Conrad (Anissa Lubbers) and Borachio (Philip D. Henry), Don John gets Claudio and Don Pedro to think that a glimpse through a bedroom window of a late night tryst is Borachio and Hero, when in fact Borachio is enjoying a little time with his lady friend, and Hero’s maid, Margaret (Sabreena Candreva). Claudio believes the worst (after all, he’s insecure and has only known the girl for a couple of days, and has been engaged to her for still less time), and vows to shame her right in the middle of the marriage ceremony.

“Not till God make men of some other metal than earth.”

All this and I haven’t even focused on what most people rightly focus on with any production of Much Ado, the verbal sparring between the unlikely but well-matched pair of Benedick and Hero’s cousin Beatrice (Johanna Gorman-Baer). These two are the reason people regularly produce this play. It’s some of Shakespeare’s wittiest banter, from two of his smartest and most well-drawn characters. Beatrice is one of only a handful of decent, meaty roles the Bard wrote for women, and one of still fewer happy ones.  Moore and Gorman-Baer make a great duo, and their scenes individually with other characters only make their time together as a couple richer.

“Thou and I are too wise to woo peaceably.”

Because here’s the key thing: Jenna Papke as the director and her committed group of actors all take pains to be sure that everything ties together. No scene is an isolated incident or throwaway moment. The characters evolve, the plot moves forward. That would seem to be a no-brainer of a thing to do, but so many people get that wrong with Shakespeare. They load individual moments up with too much weight or leaden pacing. Particularly with a light comedy like this, that kind of imbalance can be deadly. They may speak a bit fancier than the rest of us, but these characters are all people with real needs driving them first and romantic poetic figures second.

“Never forget that I am an ass.”

Nowhere is this even-handed “eyes on the plot” approach more welcome than with (the usually dreaded) Dogberry the constable (Brian Watson-Jones) and his sidekick on the watch (Mickaylee Shaughnessy). I find most of Shakespeare’s clowns unwatchable (As You Like It‘s Touchstone and Twelfth Night‘s Fool being the notable exceptions). Most of the time, the story grinds to a screeching halt so that the audience may be treated to a litany of penis and fart jokes in Elizabethan English  If that’s your thing, have at it. In Much Ado, already a comedy, piling on deliberate comic relief seems like everybody’s trying too hard. It can be painful to sit through. But Watson-Jones’ Dogberry defied my admittedly low expectations. Dogberry seemed like an actual character, with something at stake. His usefulness in helping unmask Don John’s plot against Hero and Claudio, although completely by accident, made him (dare I say it) a welcome sight each time he appeared. Now if Papke and Watson-Jones can keep Dogberry in proportion like this throughout the run, that will be a welcome comeback for a  much maligned fool. It will be tough. The temptation to go broader, play to the crowd and ad lib is almost irresistible. Resist. Right now it’s going so well.

“I would eat his heart in the marketplace.”

Even all the cross-gender casting (Leonato, Don John, Conrad, the Friar and the Watch are all usually roles handed to men) is handled with a mercifully light touch. No larger message is being grafted onto the play, except perhaps to show by example that women could play a great many more roles in Shakespearean ensembles and no one would bat an eye. Also, even though everyone is enormously concerned about the amount of mileage that’s been racked up on young Hero’s vagina, a woman’s place in society then and now isn’t decried in some heavy-handed feminist screed. You could argue that not a lot has changed, since we have so many politicians obsessed with the female reproductive system who have little to no idea how it works. But just like the humor, the production wisely lets you ruminate on these things on your own rather than forcibly lead you there.

“For thee I’ll lock up all the gates of love.”

There are some rough edges, but blessedly few of them.  Despite an energetic and able performance by Cohen, the character of Don Pedro remains a bit of a cypher. He’s always a tough nut to crack in this script because he’s both key to the action but doesn’t have a lot of material to work with in terms of character. Unlike nearly every other character on display in this production, the team doesn’t seem to have made a decision on which way to take him. But there’s got to be something there. He takes it upon himself to play matchmaker for not one but two of his close friends. Yet in a romantic comedy where people are pairing off right and left, he remains alone. Because of the actor, this character is as young and vital as anyone else (and even if he were older, that shouldn’t matter). Why is he left on the sidelines, or why does he choose to stay there?

They use the nontraditional performance space of the banquet hall at the Black Forest Inn well, even threading some of the action through the audience (if you have comic asides, you might as well capitalize on them). However the acoustics can be tricky, so a number of the actors could speak up to be heard better. If you’re wondering whether you’re too loud, you’re not. Take your cue from vets like Jean Wolff, Zach Delventhal, Brian Watson-Jones and Scot Moore. Don’t be afraid to be loud. We’re close by in the audience but we’re still not right next to you. It’s not really a conversation.

“When rich villains have need of poor ones, poor ones make what price they will.”

The shoestring budget also shows a little in the costumes which visually go together well as a group for the most part but are sometimes not flattering to the actors who have to wear them. On the upside, the original music written and performed by Joe Allen as Balthasar is quite pleasant to the ear and is integrated well into the action, like so many other elements and performances throughout the night.

“My mother cried but then a star danced and under that was I born.”

All my thanks to the folks at Six Elements. You have renewed by faith in Much Ado About Nothing by doing something so simple people frequently forget to do it. You didn’t let the fact that it was Shakespeare intimidate you and cause you to treat it differently. You just tackled the script and put on a damn good piece of entertaining theater.