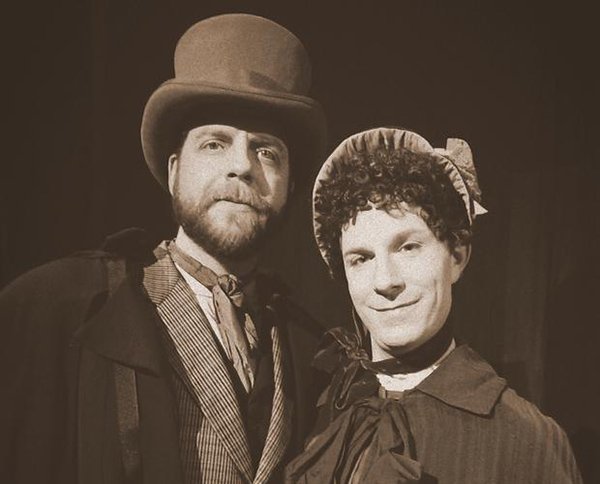 Freshwater Theatre’s world premiere of Ruth Virkus’ new historical romance Mrs. Charles is a charming production full of little miracles. Chief among these miracles is the fully realized gay love story that is the foundation for the play. This is even more remarkable when you consider that the central conceit of the play is a man masquerading as a woman, and unlike most other examples you can think of, the comedy here isn’t the cheap easy comedy of “ha, ha, a man in a dress.”

“Perhaps I am selfish.  It doesn’t make me wrong.”

Set in late 19th/early 20th century Minneapolis, Mrs. Charles tracks the ups and downs of the unconventional marriage of Walter (Nathan Tylutki) and Charles (Neil Schneider). Walter gets a big job opportunity that requires a move to the midwest. Walter and Charles don’t wish to be separated, but Charles doesn’t want to pretend to be a cousin, friend or roommate. He wants to be a couple with Walter out in the open. Knowing the society of the time won’t stand for this, they come up with the radical solution of Charles capitalizing on his more feminine demeanor and going undercover in drag as Walter’s wife. They enlist the aid of Charles’ good friend Margery (Katie Starks) to move with them and help maintain the charade. Against all odds, they pull it off. This partnership lasts to death and beyond.

“He speaks entirely in clauses, have you noticed? He doesn’t have the gumption to finish a sentence.”

Walter and Charles even manage to build themselves a little nuclear family. When the maid Agnes (Erin Denman) finds herself pregnant by the kind of guy who is neither husband nor father material, Walter and Charles take on the baby as their own—another masquerade that lasts to the end of their lives, long after their daughter Garnet (Mikaela Kurpierz) is a full grown woman herself.

“Don’t try me, Walter.  I’m about to take this house apart brick by brick with my teeth.”

Once again, Mrs. Charles doesn’t take the easy route of hinging the drama of the play on the question of “What will happen when people find out?” Charles is so convincing in his role, that it no longer becomes a role. Charles is one of the ladies of the community—fighting for equal rights like the woman’s vote, or social causes like prohibition. The big question then becomes: What does their life look like if no one ever finds out? This is the world Mrs. Charles shares with us.

“Later you may dismantle me.”

On the one hand, thank God there are many places in the world where gay couples no longer need to go to such extremes to be together. But by examining Walter and Charles’ unbreakable bond, and the lengths to which they’ll go to be together, the audience sees the strength and power of their love. The longer you watch them masquerading as a “normal” couple, the more you realize, dress or no dress, they are a normal couple. Love is love, no matter how you dress it up. Family is family, no matter how many different sources that family is cobbled together from. This makes Mrs. Charles sound more overtly political than it really is. It’s slyer than any baldly stated slogans. Walter and Charles just… are.  They fight like any other couple, but the fight is never about whether or not they have the right to be a couple in the first place. It’s the mind of the audience that has to figure out what to do with the non-issue of the two men being together in a loving relationship.

“Her opinions are as pointy as her elbows.”

Like any good historical fiction, Mrs. Charles is meticulously researched. In fact, playwright Ruth Virkus and director Jimmy LeDuc may both be just a little too in love with all that research. There’s so much one could include, Freshwater has decorated all the walls of the lobby with information on key historical figures, events and societal minutiae. Again, like Mrs. Charles itself, all most entertaining. But just like what would normally be a program note balloons into an entire lobby display, the research underpinning Mrs. Charles keeps bursting through and periodically hijacking the narrative. This, in additional to a structural decision which only becomes clear in hindsight, makes the first act almost epically long—clocking in at an hour and a half. Act one also feels like it ends a few times before it actually does. It comes to a satisfying end point, then continues, and continues, and continues to the point where you start to wonder, “There is an intermission, right? It’s not two hours straight through, is it?”

Mrs. Charles is on its strongest footing when it’s squarely focused on Walter and Charles.  When it strays into “this is how the suffrage movement impacted Charles” or “this is how the temperance movement impacted Charles,” it starts to feel more like a history lesson and less like the story of this unusual couple. When the focus of act two shifts to the highlights of Garnet’s life (graduation, marriage, etc.) and Walter and Charles’ relationship becomes more background color, the production again isn’t playing to its strengths.

“Everything in this room is a friend.”

This may be in part because in addition to greater society, even Garnet never finds out that her mother Charlotte is also a man named Charles. The abundance of historical detail and the crowded cast of characters it entails (Sarah Broude, Matthew Cawley, Rachel Flynn, Shannon Troy Jones, Ariel Leaf and Kevin McLaughlin—all but one of whom plays multiple roles) feels sometimes like unfinished editing. Garnet’s continued ignorance feels like a missed opportunity. Walter and Charles were no doubt afraid that they’d lose Garnet if she found out. Perhaps for a time they would. But both Margery and Agnes (Garnet’s biological mother) could act as intermediaries to talk it through and try to reconcile the family.

“So you’re a plaything and I’m a gravy-stained dolt.”

Of course if Garnet knows, then there’s the issue of what to tell the important men in her life (and there are several), and when. But on the most basic level, if they don’t tell Garnet, if she never knows and has to grapple with the reality of her parents as a gay couple, then nothing changes. Charles is all about greater societal change—suffrage, temperance, etc. Change begins at home. And change is most compelling, and messy, and funny, and dramatic, at home. I realize at the time, and until very recent decades, just the notion of being adopted was considered both traumatic and destabilizing. “When she’s old enough, we’ll tell her” is a strategy that can apply to many things. If Walter and Charles were less bold and daring in the way they lived their lives, if they were less articulate, if they thought less of Garnet, I could understand not having this discussion. But since they are bold and smart and so is Garnet, why isn’t at least Garnet let in on the family secret?

“My father always knew where my mother was in any room.”

But that’s rewriting the play. Mrs. Charles, the play that exists, is full of power and heart and laughs. Because the audience is in on the secret from the beginning, the story always plays for the spectators on two levels—the story going on in front of the other characters, and the story we know is going on beneath the surface. Walter and Charles’ playfulness with one another, even in their later years, is especially charming. Nathan Tylutki and Neil Schneider are to be commended for their devotion to this couple onstage. You never feel like they’re “acting” or holding back. The fondness between them seems entirely genuine. Katie Starks also has great fun as Margery—a fierce yet buttoned-down woman in a very unbuttoned-down situation. Margery’s sense of social justice can at times be overwhelming but her protectiveness of her friends and their secret is often moving to watch in action.

“The alternative is not to be imagined.”

I’m happy Freshwater Theatre exists for many reasons, but chief among them is I really enjoy Ruth Virkus’ voice as a playwright. So it’s great that she and Ben Layne and their fellow company members have created a place where her writing can develop and flourish and get out in front of audiences, at the same time that they encourage the work of other local writers as well. With Mrs. Charles, a different kind of gay pride came a little early this year.