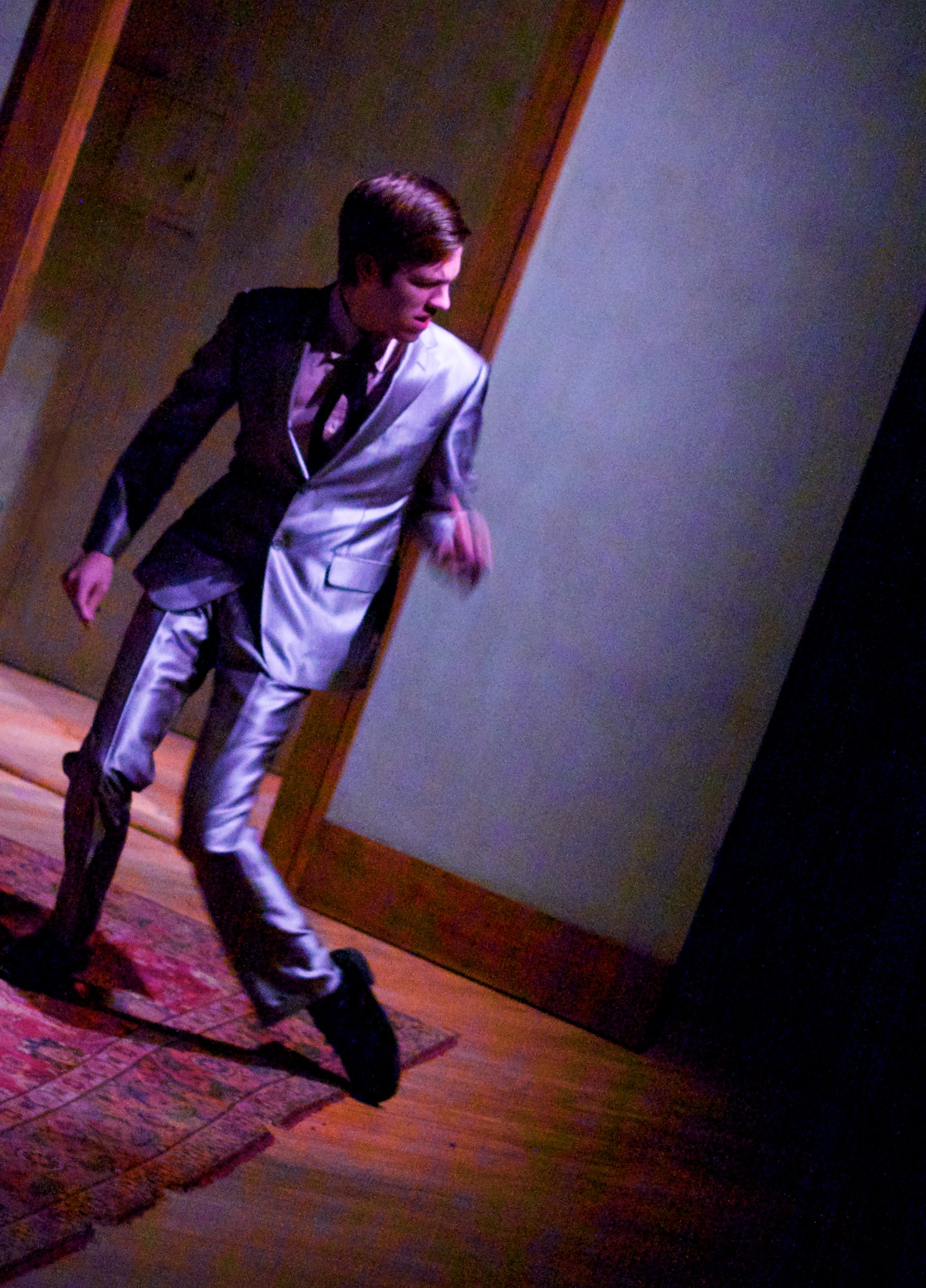 Someone once joked that David Mamet’s typewriter should be checked for steroids. They probably want to check Jez Butterworth’s laptop while they’re at it. Butterworth is the author of Mojo, currently having its regional premiere courtesy of Walking Shadow Theatre Company in the Red Eye Theater. In many ways, Mojo is Glengarry Glen Ross with scrappy working class British accents—and a body count.

It’s 1958 in the Soho district of London, and everyone’s trying to grab their share of the fresh-faced rock and roll craze—an enormous, lucrative wave of opportunity that’s cresting and about to crash.  The problem is that in this particular rough and tumble club called Ezra’s Atlantic, some people are playing for keeps.  When a handful of small-time losers peddle their discovery, the talented and popular young Silver Johnny (Will Lidke), to the local crime boss, things start going horribly wrong pretty quickly.  Somebody ends up kidnapped, and somebody else ends up murdered.  And that’s just partway into act one.  Things continue to spiral out of control right up until the play’s final minutes.

Mojo has a lot of things going for it, first and foremost the writing. It’s strong, goofy, darkly funny dialogue that bubbles up out of the mouths of every one of the characters in an almost never-ending torrent. The words create these people, rapidly unveiling personalities and priorities, strengths and weaknesses. The shifting allegiances and secrets uncovered all make their own peculiar sense because everything is grounded in the solid foundation of these words.

All of which would be nothing without a smart ensemble of actors to wrestle those words into submission and breathe some three-dimensional life into them. Joey Ford as Sweets, Skyler Nowinski as Potts, and Mark Benzel as Skinny each create their own special brand of loser, endearing almost in spite of themselves as they bumble their way along, trying to go toe-to-toe with the big boys and quickly finding they are way out of their depth. Ryan Parker Knox makes ringleader Mickey into the kind of guy you want around in the middle of a mess like this—his moments of silence and restraint often carry more weight than when he’s barking orders at his talkative friends. I’ve seen Anthony Sarnicki in a few notable roles over the past year—the title villain in a wobbly production of Richard III, a vain and vulnerable TV action star in Super Monkey, and now the character of Baby in Mojo. This latest role provides him with, believe it or not, an even better showcase than Richard III, and Sarnicki digs into the red meat of yet another sociopath with spooky intensity. Baby is compelling and always just a little menacing, from the moment the audience meets him.  He’s the reason there’s a warning about gunshots, after all.  The others may be dangerous because of their constant string of mistakes, but Baby is the most dangerous because the events of the play quickly leave him with nothing to lose. Recklessness emanates from the guy in waves, stronger as each scene ticks by.

Balancing the playfulness of the language with a creeping sense of dread is a delicate business and director Amy Rummenie guides the proceedings with a very sure hand, just like she always does.  One of the many challenges of the script for Mojo is that nearly all the key events take place offstage. Characters are living in the backrooms and the basement, reporting on things to one another, or trying to piece together what’s going on from what little information they can gather from their limited perspectives. On the most basic level of dramatic action and storytelling, Mojo shouldn’t work. But because of Rummenie and her skilled collaborators on and off stage, it often does work.

The work of set designer Steve Kath also deserves special mention.  Watching the cramped back room of act one give way to the epic bar set of act two was one of the night’s many little thrills.  Both sets provide the perfect environment in which the action can take place, first setting people on top of one another, then giving them space to spread out and really do some damage.  The Red Eye space can be a hard one for a play not to get swallowed up in, but Kath’s work makes full use of the space in a way I haven’t seen done in a while.  Logan Jambik’s lights, Mike Hallenbeck’s sound, Renata Schaffer-Gottschalk’s costumes, and Jennifer Probst’s props all help fill out the world and make it real.

For all the great work going on here, though, I came away from it all strangely unmoved.  Everybody was doing their job just right, so that leaves me to assume that the blame must fall in large measure on the script.  Maybe the subject matter of men turning on one another in order to get a bigger share of the glory, or just ensure their own safety at the expense of others, doesn’t grab me on a basic level.  Looking beyond the subject matter, and the dazzling language, I don’t really feel like I got to know any of the characters.  And that’s not for a lack of anyone trying.  The script also dances around the edges of actually dealing with abuse, male bonding, homoeroticism, and just maybe a little more.  But because all these guys are fairly limited in their ability to express themselves (at least in matters of emotion, where it might count), the play can never really go where perhaps it most needs to go.  Or maybe, like everything else of significance, all that is getting resolved offstage. Mojo is a lot like a really great rollercoaster ride.  Sure, you end up right back where you started, you never really go anywhere.  But while you’re in the middle of it, it’s a heck of a ride.

For some really fine ensemble acting, well-directed and ably designed (I’m tempted to say “a better production than perhaps the script has any right to hope for”), Mojo is recommended.