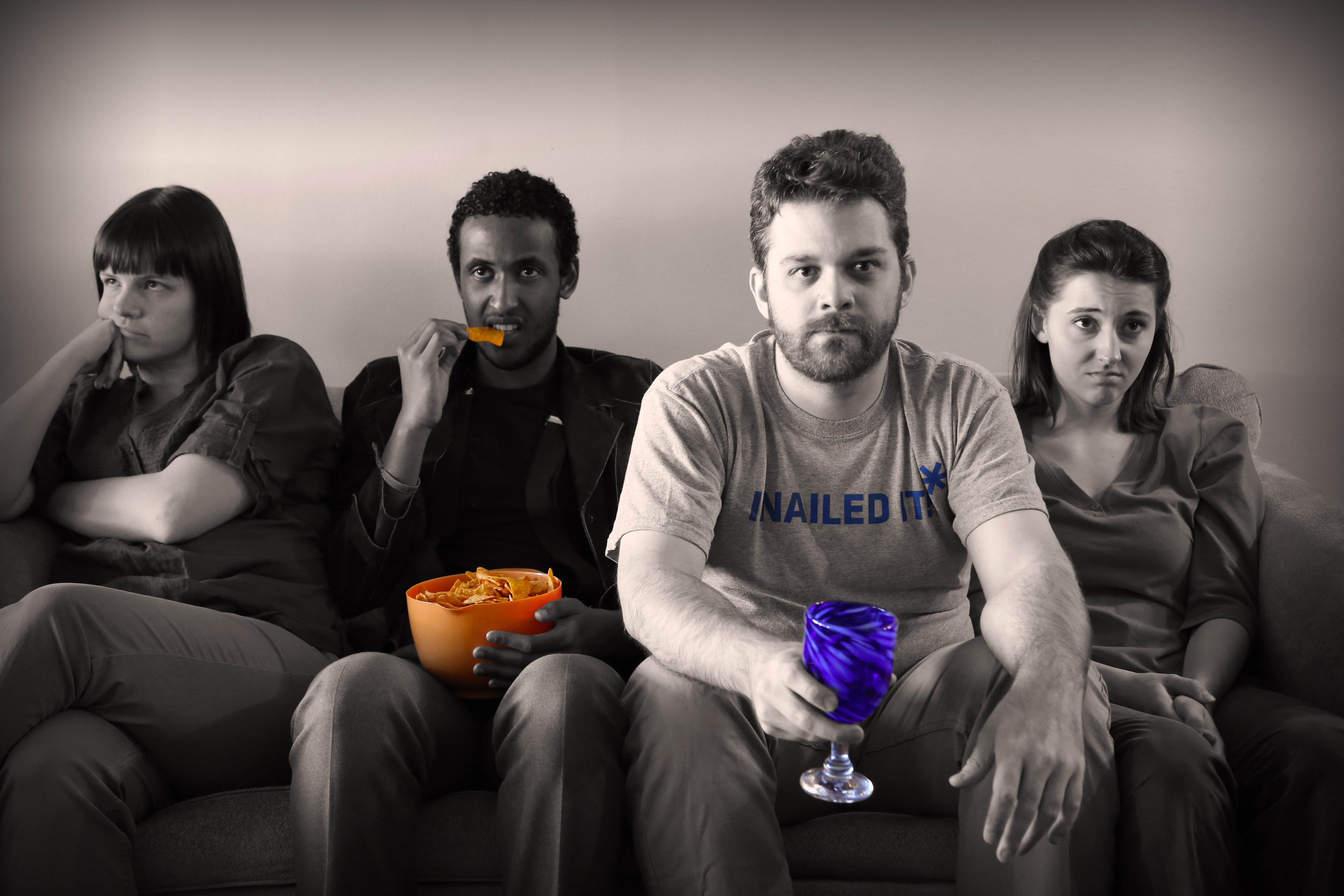 When I can’t tell you, simply, what a play is about, that can be problematic. This is my struggle with Sam Graber’s new play Modern Prophet, developed with and produced by Mission Theatre Company. The theater’s website says the following:

“Against the backdrop of the Minnesota sand mining boom, an energy scavenger and his sister arrive at the river headwaters just east of Jordan. They soon learn they are not alone. A strange man roams the woods at night. He claims he carries the power of God. Modern Prophet questions the nature of belief and explores the crossroads where destiny ends and human responsibility begins.”

The director’s note in the program says the following:

“In August of 2012, Modern Prophet was simply a coffee shop discussion about pop-cultural takes on prophecy, and the possible shenanigans that would occur if modern culture was faced with the arrival of an unexpected prophet. Since then, it has grown into a much deeper dialogue around faith, destiny, humanity and responsibility.”

The playwright’s note says the following:

“My friend and I had fallen into a habit of tossing out for intellectual digestion any number of provoking ideas that could serve as a tantalizing concept for a new play. During this particular visit, we asked: what would happen if a God-like force appeared with a new commandment for all humanity? Would we listen? Would we be able to abandon instantly our comfort routines, our homes, our lives, and take heed?”

All of which is fascinating to me and promises the birth of a meaty play dealing with big issues. Though Modern Prophet has had a year to gestate, the current premiere production seems to indicate the play has some more growing to do.

“Talk to the babies.  Even if they can’t hear you, it helps.”

A key figure in the play is the prophet Elijah, who turns up in a number of religious traditions, including Judaism and Christianity. For Christians, he’s an Old Testament prophet who had the distinction of not having to die in order to ascend to heaven. He was swept up near the river Jordan in a whirlwind, and there may or may not have been horses and a chariot of fire involved, depending on whose version of the story you’re hearing. Before his non-death, in addition to his prophecies which included talk of the Messiah and the end of the world, Elijah was also involved in raising the dead and calling down fire from the sky.

“We hide from God in the rain.”

Since my family doesn’t celebrate Passover, I didn’t have some of the other background on Elijah. When I mentioned the character of the prophet to a co-worker, they immediately asked if the writer used the empty chair and extra glass at the table and the open door. Why yes, he did, though I didn’t understand why at the time. I’ll probably get the details of the tradition wrong but apparently one of the things that’s done at Passover is an extra cup and an extra chair are set at the table for the prophet Elijah, and the door is left open to signal that he is welcome to come and join the meal and give his blessing.

The open door is also a symbol of trust in God. In order to convince the Egyptians to release the people of Israel from slavery, God sent a variety of plagues. When none of the previous plagues did the trick, the final plague was to send the angel of death to take the first born son of every Egyptian family. The Israelites marked their doors with lamb’s blood and the angel of death passed by their homes. The open door during Passover today is a reminder of that.

“99% of jellyfish is water. The other one percent? Lies.”

“How many enemies do you have now?”
“Geography takes care of that.”

Modern Prophet takes place in Jordan, Minnesota, where Aram (Aaron Konigsmark) brings his sister Josie (Katie Willer) to celebrate the fourth anniversary of their father’s death. Aram’s been traveling the world leaping from one get-rich-quick scheme to the next, heading out of town just a couple of steps ahead of whoever he’s just screwed over when the whole operation falls apart. Now he’s here in Jordan to take advantage of the sand mining (which is part of the supply chain for the newly popular fracking industry among fossil fuel producers). To say Josie is reluctant to reunite for quality time with her brother at this remote cabin is an understatement.  But Josie turns out not to be the model of sanity and stability we and Aram expect her to be either.

Aram picks up a helpmate in Becky (Maria Signorelli) who seems to only speak Spanish but is hiding a whopper of a secret of her own—tied directly to the fact that her name isn’t really Becky. Meanwhile, Josie gets an unexpected visitor in the form of the ancient prophet Elijah (Sadeeq Ali). When the arid weather gives way to a rainstorm of almost Biblical proportions, mining sand and getting back to civilization both seem like doomed prospects. The first act moves at a slow but steady pace with a Sam Shepard feel to it—moving under a cloud of existential dread.  Also like many a good (or bad) Shepard play, the audience spends a fair stretch of time wondering, you’ll pardon the expression, what the hell is going on.

“The ravens remembered.  All in all, the ravens have been good to me.”

All of which would be fine, if it then delivered on the promise of its premise.  But when the lights come up on act two, the whole story takes on another tone entirely. It partially becomes a wacky door-slamming sex farce, which I could almost forgive if the characters behaved with any consistency at all. But the ensemble all appear to reboot their characters with a complete personality transplant in the second half of the play, often in service of jokes that are painfully strained. By waving his hand over a goblet, Elijah keeps a never-ending stream of booze flowing. He also can take bowls from empty to magically overflowing with tortilla chips. Josie and Elijah disappear behind a door for some offstage lovin’ which fails to go as planned—and we listen to it all. Aram and Elijah booze it up for a dudes’ conversation with the subtext of “Bitches, man! They just don’t get it.”

“We’re not from Winnipeg.”

Behind one door, quite literally, lurks the will of God, which can sear your eyes or give you visions. Which is, I’ll grant you, a super cool concept. Here again, wasted because like so much else in the second half, the idea and its consequences aren’t allowed the time and space to breathe. After a slow act one wind-up, act two burns through plot points at a dizzying speed that shortchanges both those onstage and in the audience. One can’t lay the blame at the actors’ feet for this one. They’re all trying their best and I’ve seen the work of some of these people before. I know they’re capable of solid work given the right material and guidance that is both specific to their characters but also keeping the larger picture of the narrative in mind. Playwright Sam Graber and director Anneliese Stuht appear to still be trying to decide exactly what the story and characters are about. Those mixed messages trickle down.

“Shooting him would help us both out.”

A prophet implies a prophecy, a God with an agenda. A prophecy implies a message to a specific population, not just one or two people (at least, that was the sort of prophecy the original Elijah was trafficking in). Being a prophet implies sacrifice, and fighting against some sort of societal norm that isn’t serving the greater good. The play tiptoes right up to the edge of saying something about the destruction of the environment, and the warping of the minds of schoolchildren by authority figures who aren’t looking out for their best interests. Instead of digging into these notions, which couldn’t be more relevant to the times we’re in, the play focuses a lot of subtextual and textual time and energy positing that anyone religious must be deluded, even dangerous, and must have some other agenda that is less than holy.

“Nobody thinks of all the ghosts outside.”

If you were a prophet, thousands of years old, unable to die, invisible to most eyes, seeing the last few centuries of human history, what would that do to you? How would you feel about God’s creation? How would you interact when you finally had a chance to talk to someone? What would your prophecy be? What kind of person would you be looking for as a successor on your mission?

“Hitler said he wouldn’t invade Poland. Right before he invaded Poland.”
“I don’t think he said that.”
“You were there?”

If you believe in God so strongly and are visited by visions that you feel compelled to share with others, even to the detriment of your life and career, how would you feel about God and your place in the world? How would feel about meeting the prophet Elijah? What would you say to him?

“The land has a language of its own.”

If your parents’ belief in God was used to justify all kinds of punishment when you were a child, how would you feel about your sibling who still believed religion was a good thing? How would you feel when faced with proof that the prophet Elijah was in your midst?

“I love it when you quote from Bullshiticus.”

These are questions that go almost completely unanswered in Modern Prophet. They would fundamentally change the way the characters of Aram, Josie, Becky and Elijah all interact with one another. They could make for four very rich, complex human characters. They could make amazing and powerful play.  We’re just not there yet.

“Will you just shut up already?! Moses!”

An audience is a key part of any lucky play’s growth process. I applaud a fledgling company like Mission Theatre taking on the task of developing new work as part of their mission. The story of Modern Prophet has all kinds of potential. Perhaps this production will jumpstart the play into the direction it ultimately wants to go, the characters will get stronger, and the extraneous elements will fall away. That’s my hope for the play. Because Modern Prophet is beginning to delve into subjects that could be very important indeed.

Read Morgan Halaska’s review of The Book of Mormon (February 2013).