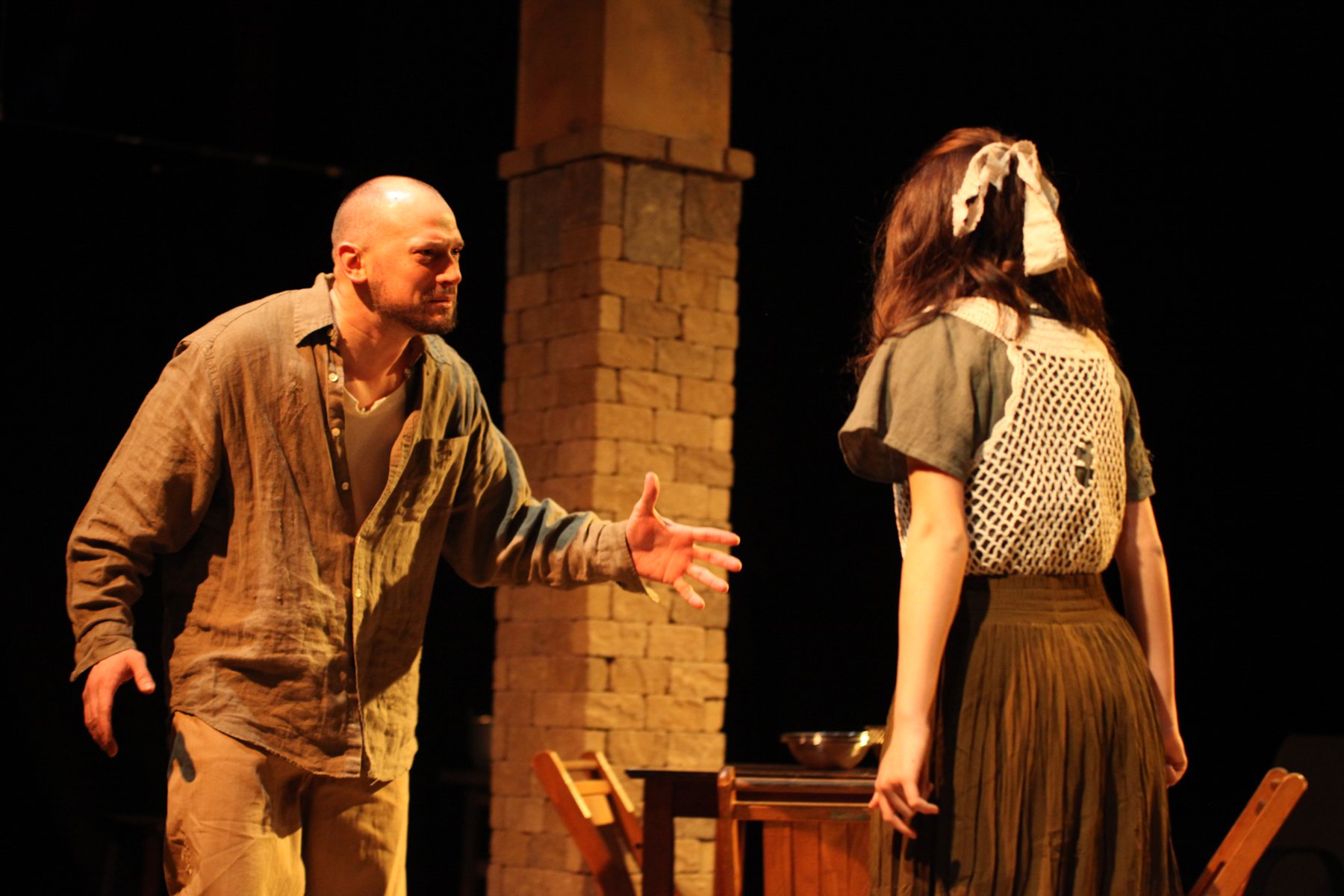 A 12-year-old girl rebuffs the repeated sexual advances of a 19-year-old farmhand. In response, the boy stabs the girl to death. On her deathbed, the girl forgives the boy and says that she hopes to see him in heaven with her one day. The boy is sentenced to prison. Miracles begin happening at the girl’s gravesite. The boy is visited in prison by a vision of the girl he murdered. The boy experiences a religious conversion. Years later, when the boy, now a man, is released from prison, he goes to the girl’s mother to apologize. The girl’s mother gives him the same forgiveness her daughter did. The murderer and the mother of the girl he murdered both attend the canonization ceremony for the girl when she is declared a saint of the Catholic church. The man lives out the rest of his life in a monastery, tending the garden. We can’t know, but perhaps he and the girl met again in the afterlife.

“Gardening is where heaven and earth meet.”

This is the skeleton of the story of young Maria Goretti and her killer Alessandro Serenelli in the first half of the 20th century in Italy. It provided the impetus for the play Mercy Unrelenting, currently being remounted by Open Window Theatre. This true story of the impact of forgiveness and the possibility of redemption has the potential to be enormously powerful. Several members of the audience at the performance I attended were tearing up when it was done. Still more were awestruck by the implications of something good coming out of a situation so dark, including the friend who saw the show alongside me. Watching Mercy Unrelenting for me, though, begged the question, “Who is your audience?”

“You blame God even though you don’t believe he exists.”
“I blame him in case he does.”

I’m all for more explorations of religion and faith onstage, and not just of the Christian variety. For centuries, human beings have been telling stories about their gods in order to better understand how the world worked and how to live in it. Many would argue that church is where theater came from in the first place. When people gather together, there are all kinds of rituals that emerge. That said, particularly with stories in a religious context, you could go one of three ways. You could be preaching to the choir, telling the story to people who already know it, so they have a chance to relive it in a live performance context and experience the power of it again. You could be bringing the story to people who aren’t familiar with it, sharing that experience with them for the first time—even proselytizing, if you wish. Or, you could be serving both audiences—a trickier balancing act, but possible. Right now it feels like Mercy Unrelenting is trying to address all three approaches at the same time, and it’s making the purpose of the story a little fuzzy.

For instance, whose story is it? The overall structure of the play seems to indicate that this is Serenelli’s story. The frame the rest of the story hangs in brings a reporter named Vittoria (Christian Bardin) to the monastery where the elder Serenelli (David Coral) serves as the gardener. She alternately badgers and cajoles him into telling his story. The younger Serenelli (writer/director/producer/artistic-director Jeremy Stanbary) attacks Maria (Katie Law-Gotich). She goes to heaven, he goes to prison. Inside the prison, the guard (Eric Heimsoth) doles out punishment while the chaplain (Joel Thingvall) tries for redemption. When released, Serenelli seeks out Maria’s mother (Ellen Apel) for forgiveness.

“If God did exist and Maria was a saint, what did that mean for me?”

The strange thing is, for all the time we spend onstage with both versions of Serenelli, we don’t really get to know him that well. This is despite all different kinds of exposition and discussion. People talk a lot about him, but we don’t get much of a chance to see him in action. There’s a lot of skulking around the young innocent Maria, escalating to their final confrontation. There’s also a lot of time spent rotting in prison. It would seem that the point of the story would be the redemption and the miracles, the good that comes from the bad—but we spend two-thirds of the play working up to the stabbing, and then rush headlong through everything that happens afterward, crammed into the second half of the second act. Honestly, I don’t care why he did it. People rape and murder every day. Tragic as it is, I know that story. What I don’t know is why and how perpetrators change. That’s what makes this story so different. That’s the window (you’ll pardon the metaphor) into the process and healing power of religion.

“I guess not all can be saved, or ought to be.”

This gets back to the audience question. The church-going folk, particularly Catholics, in the audience probably come in knowing a little something of the story—so they don’t need all the wind-up to the murder. They will also help the play fill in the blanks with their own personal redemption stories and the place of religion in their own lives.

“It may surprise you to learn that very little surprises me anymore.”

Those who aren’t familiar with the story could be misled by the structure—what happens to poor Maria? Will she let her mother know she’s being harassed? Will Serenelli seduce her, or take her by force? Will she survive her trip to the hospital? The answers are all a forgone conclusion, and unfortunately beside the point. There is no suspense here, so why try and create it? Maria is a sacrifice. Do we need to watch a teenage girl being terrorized for an hour and a half? You could argue, yes, it’s important to know what Maria was battling, the trial she had to endure. I’d argue that a little of this goes a long way. We get that Maria is cornered, we get that no one sees her predicament until it is too late. The fine acting ensemble in Mercy Unrelenting makes all this clear very quickly, with very little stage time necessary.

“Why would a loving God not do something to prevent this?”

The thing we don’t see every day is the religious side of the story. How does a girl forgive her attacker? How does a mother forgive her daughter’s murderer? How does a man who takes a life and has his freedom taken away at a young age see any value in his own life, see any point in continuing, in trying to become a different, better person? How do people experience and believe in miracles? What makes a person into a saint—both the mechanics of the process, and the change in the consciousness of the believers incorporating a new inspirational figure into their faith narrative? What does the process of redemption look like? I don’t just want to see the “before” and “after.” I want to see the “during.” That’s where stories like Mercy Unrelenting can be just as effective for believers and non-believers alike, yet that’s the part that this production skips over almost entirely.

Ultimately, I realize something like this rests on grace. It’s nothing Serenelli does that redeems him—if, in fact, in his own or anyone else’s eyes he ever is redeemed. It’s not our own good works that get us into heaven, it’s someone else’s sacrifice. Being good to other people, setting an example by the way we live our lives, is key to the spread of belief to others, but it’s not what punches our ticket to the Pearly Gates. We are forgiven our failings not because of who we are but in spite of who we are. We extend grace to others because it has been extended to us. Yes, that’s a hard thing to dramatize—but I get the sense that this is the kind of thing that Mercy Unrelenting is aiming for. I think Mercy Unrelenting needs to trust that the audience already knows the human story, and spend more time digging into the guts of the spiritual story instead. It’s a bigger challenge, but the payoff will also be bigger.

“No one’s born a monster. That’s what some people like to think.”

Unlike insulting, cynical, reductive old relics like Agnes of God that exploit the sensational aspects of religion while invalidating the notion of belief as something crazy and delusional, a play like Mercy Unrelenting dares to believe, right to the end, and not give up. That’s a different kind of theater. It can be in the world but not of the world, and still strive for being more than a fairy tale or a live action snuff film of persecution and suffering. It’s a daunting mission, but the seeds of accomplishing it are already present. The talent has been assembled. It will be intriguing to watch Open Window Theatre live up to their promise moving forward.