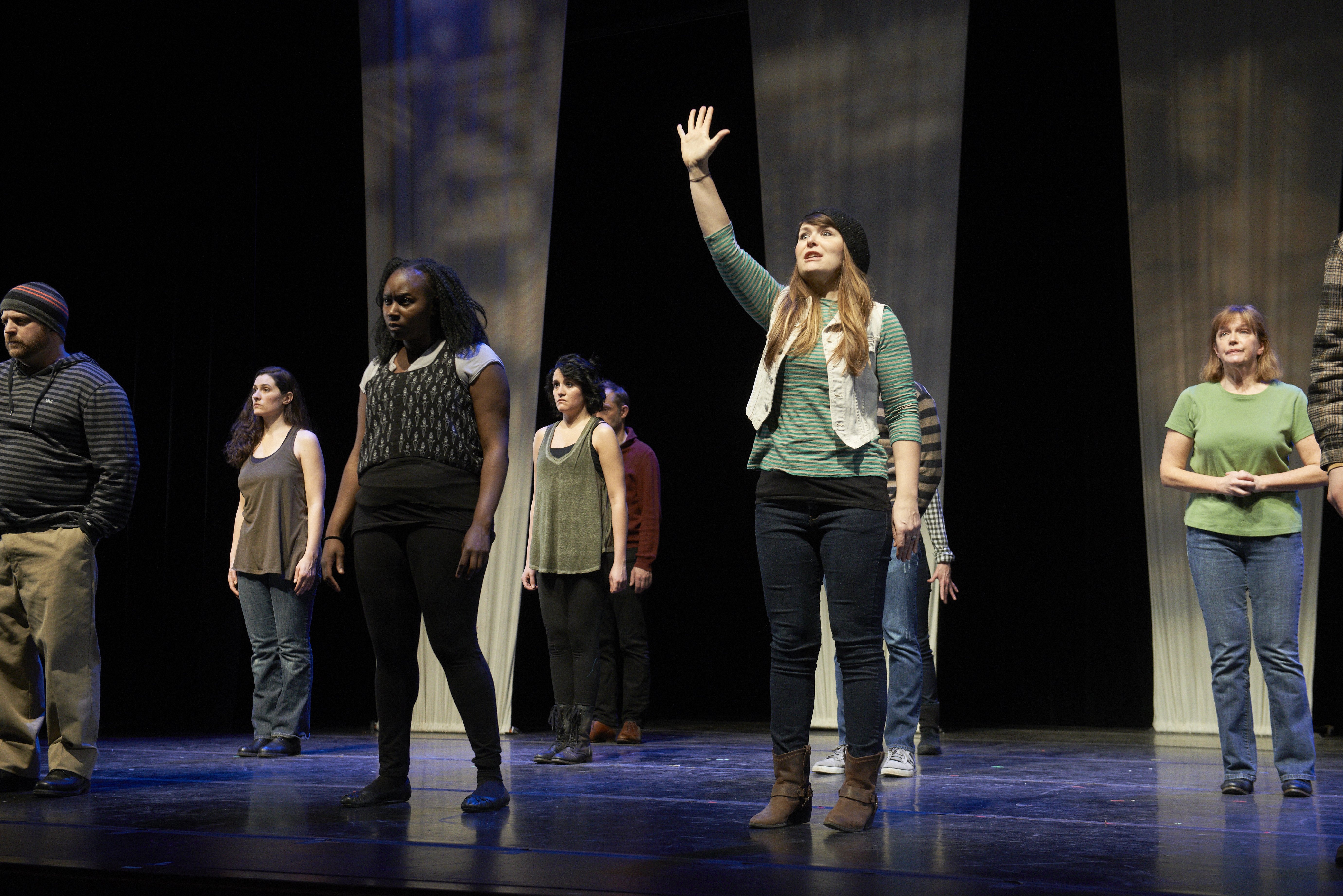 God bless Caryl Churchill and Frank Theatre. They just keep screwing with the art form and serving up something interesting. Frank’s latest production of Churchill’s latest play, Love and Information, is one of the more peculiar, intriguing, mind-bending pieces of theater I’ve seen in a while. Churchill’s script doesn’t trouble the theater company with things like stage directions or characters. There’s just text lined up as if it were almost an epic poem. It’s up to director Wendy Knox and her cast of over a dozen performers to decode the puzzle in their own way, assigning the dialogue to characters in scenarios of their own devising, and then just keep the whole thing spinning forward from the opening wordless images until the final dimming of the lights. Frank’s presentation of Love and Information is dizzying, disorienting, exhilarating and even a little exhausting, but all in the best ways. Frank and Churchill insist your brain remain fully engaged for the duration of the ride.

“He must have meant everything to you.”
“Maybe.  We’ll see.”

So what is Love and Information about exactly? Well, there’s the two primary words of the title, of course. It’s also very tied up in notions of memory, communication and miscommunication. The sequences go by at astonishing speed. Some scenes are a single line or monologue, some don’t even have words, others last for a minute or two or more. There are, by my hurriedly scribbled notes, nearly 60 scenes in Frank’s imagining of the script. Each and every one of them is a vivid photograph of something human and strange. Often the mood is humorous, other times bittersweet. It is a credit to Churchill’s dialogue that with little or no hints of something as basic as exposition, Knox and her actors are able to conjure complete little worlds with fully rounded people engaged in their own complicated and confounding relationships. The audience just gets a little window into these stories but they still swiftly make their point. Life might be a little ridiculous but these people never are. Also, this ensemble is an eclectic mix of gender, ethnicity, age and body types. The relationships wrapped around the words aren’t exclusively heterosexual, nor are they entirely romantic in nature (though a little physical or emotional attraction certainly helps stir the pot).

“I just didn’t want it to be something I could never say.”

The actors may be zipping around the Ritz Theater space at lightning speed, furiously changing costumes and rolling set pieces and props all over the stage, but they’re also clearly having a lot of fun. Each little world is its own challenge. Each mini-story needs to get sketched in and reach its zenith in record time. None of it feels rushed, but Love and Information does leave those in the audience a little breathless. Your brain doesn’t get much of a chance to settle into a story before it’s done. It’s not your standard play by a long shot, but the overall shape of the evening, with all its many tiny component parts, clings to a common theme of the multi-faceted, information-engorged way of life we lead in the 21st century.

“I’ll keep getting the hedgehog in the microwave.”

As base as it might be to admit, I still get a little thrill of excitement every time I see more than two or three people on stage. To see fourteen—Gabe Angieri, Patrick Bailey, Kirby Bennett, Virginia Burke, Joy Dolo, Katherine Ferrand, Tessa Flynn, Emily Grodzik, Brianne Hill, Leif Jurgensen, Taous Claire Khazem, Sam Pearson, Elohim Pena, and Carl Schoenborn? Better yet to see one, then another, and another, as the stage slowly fills with humanity? On a stage as big as the Ritz, full but not overcrowded. It’s a great way to start the evening (and end it—and they even revisit it in the middle, which understandably threw a few audience members [is it done? should we applaud? oh, there’s more!] How can you top a full cast synchronized dance number? Don’t worry, they do.)

Half the fun is watching the actors transform themselves from one scene to the next, one character to the next. For instance, in one sequence Carl Schoenborn is an official debating with a woman across the table from him about what information in a document will or will not be considered classified. In another, he’s a parent trying to make his child understand why they’re getting a “time out” on a stool in the corner of the room. Change of scene and he’s a man cowering behind a shopping cart at a local grocery store, triggered into remembering some recent trauma. Yet earlier he was one of two interrogators (torturers? detectives?) taking a brief break before going back in with his partner to question a prisoner. In still another scenario, he’s dressed up like a Christmas tree (no, really, literally a Christmas tree).

“Does that make me God?”
“It makes you really annoying.”

Joy Dolo goes from interviewing a female prisoner in shackles intoning that “God told me to do it,” to shrieking with fellow actors like tween girls mooning over their latest pop star obsession. One scene she’s crashing a work social function demanding to know why she’s being fired over email, another she’s driving the family away from the holiday dinner table in hilarious fashion by debating the pros and cons of the Iraq and Afghanistan wars.

“Everything moves in every possible direction!”

Elohim Pena alternately plays (in just a handful of examples) a young nerd trying to justify his virtual online girlfriend as something real, a nervous savant who comes alive when he plays the piano then reverts when the music ends, a man clad only in a towel trying to calm his closeted gay lover when the press (or the police) appear to have discovered their love nest, a skateboarder trying to explain the concept of pain, a student trying not all that hard to translate a poem, and a man suffering from mental illness getting dangerously delusional when he goes off his meds.

Kirby Bennett early on plays a clueless scientist who is so busy focusing on her work cutting off the heads of baby chicks to slice up and study their brains for chemical photographs of memory that she doesn’t notice the lab’s janitor (Patrick Bailey) has taken a liking to her, fascinated as much by her brains as her beauty. Later, Bailey is one half of a gay couple opposite Leif Jurgensen comically pondering how playing the informant may force them into a life under witness protection.  Bennett later pairs up with another actress as two elderly women playing a memory game, perhaps in a nursing home. Younger again, Bennett goes on a walk in a winter coat with a still younger woman who may be a friend, or a daughter, meditating on a recent loss of a loved one. In still another scene, Bailey and Bennett reunite, this time as a couple preparing for a party Bailey is reluctant to attend that she cajoles him into. Near the end, Bennett sits on the ground, contemplating a slow-moving snail, making a point of just being still and in the moment, watching nature move at its own pace.

“We’re not paid extra for it to be true.”

(And that’s just a sampling. The downside to no characters and no specific assignments of identity in a script like this [and thus also the program] is that I have go with the actors I know by sight. Suffice it to say, everyone in the ensemble does similar transformative, dazzling, amusing, disturbing work throughout. From hotel maids to hipsters discussing terrorism to game show contestants to political debaters to dementia-plagued seniors, all of Churchill’s meditations on what it means to be human in a world where secrets and information come in all shapes and sizes are brought vividly to life.)

“You can take it to your analyst and have it turned into meaning.”

The actors all do amazing work, and the design backs them up. Kathy Kohl’s costumes help to visually reinforce that each new character when the lights come up is a completely different person than the one we saw an actor create just minutes before. Ray Steveson’s lights don’t just mark the beginning and ends of scenes and help establish location, they also add punctuation when a Churchill scene is perhaps just a series of lines which are sentences that are never allowed to be finished. Erica Zaffarano’s free-wheeling set pieces and Kellie Larson’s props quickly ground a scene while not overburdening it with too much “stuff” (key to keeping this thing moving at a brisk pace, the whole thing’s under 90 minutes long). Dan Dukich’s sound provides the connective tissue that carries us through the dark and gets us from one scene to the next. Normally you would hear me complaining about blackouts between scenes, and scene shifts that have a tendency to kill a show’s forward momentum. Not so here. If anything, the audience needs those little blips of darkness and sound to fully take in whatever just happened and steel themselves for the brand new world and people about to appear.

“The one where we kept trying to say goodbye.”

Fair warning, my interpretations of some of these scenes and characters may also be wildly off the mark. Everyone in the audience will see and respond to these scenes through the lens of their own experience, more than with many another “normal” play. It’s rare for a play not just to entertain you but also to require you to be an actively engaged, thinking participant in the process from beginning to end. Love and Information is a bit of an adrenalin jolt for your brain. Though I was a little exhausted when I crashed after it was over, it was still a heck of a lot of fun to hold on tight and enjoy the ride.