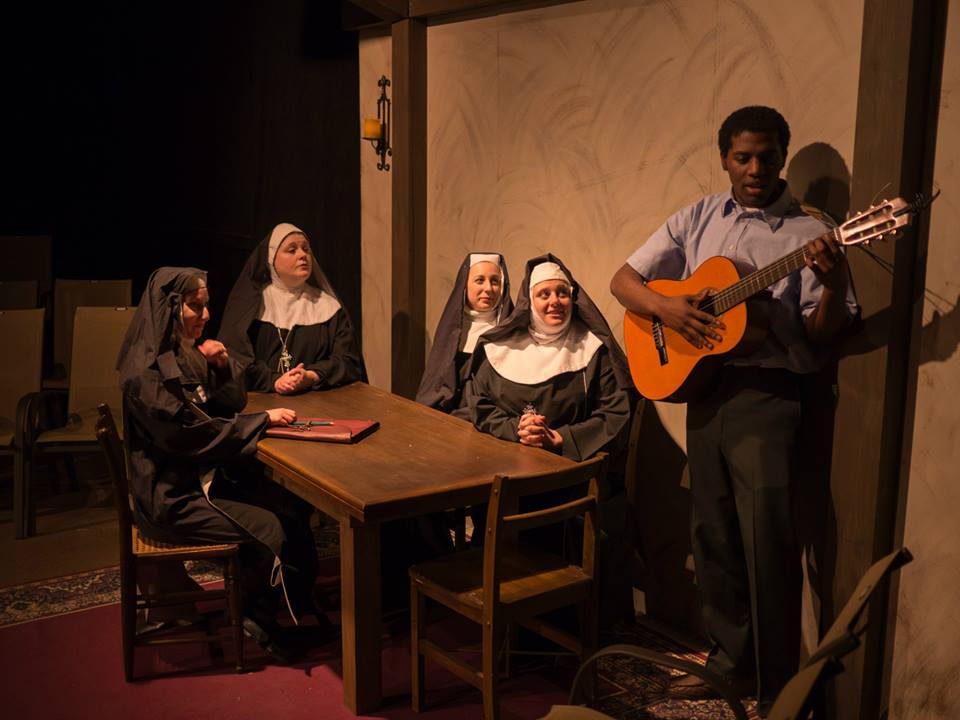 An African American former army soldier, recently discharged and driving where he pleases across the USA, crosses paths with a group of newly transplanted Catholic nuns from Germany in need of a handyman to do work around the abbey. It’s the 1950s in the American southwest. So you’d think Lilies of the Field was going to be a racially charged story about prejudice and misunderstanding. You’d be wrong. OK, then it’s going to be a warm and fuzzy ode to how God’s benevolent guiding hand brings people together for the greater good. Nope, not quite that story either.

“Like all legends, it is part fact, part falsehood.”

After fixing the roof and sharing a meal, traveling Homer Smith (Lamar Jefferson) gets pulled into giving stern Mother Maria Marthe (Gail Ottmar)’s three followers—Sister Albertine (Sarah Zuber), Sister Gertrude (Therese Walth) and Sister Elizabeth (Lauren Diesch)—English lessons, as well as sharing music with them. (The music is a big added strength of the show. It’s also pretty entertaining to listen to the nuns try to lose their German accent while speaking English but pick up Homer’s Southern accent instead.) Homer gets talked into chauffeuring the nuns around as well, whether it be to church on Sunday while he hangs out at the diner with owner Jose Gonzalez (Al Saks), or into the city to try and wangle building supplies from the local construction magnate Orville Livingston (Joel Thingvall). Mother Marthe’s big project for Homer is to help them build a chapel. If you think one man can’t build a church, you’d be right. But that doesn’t keep them from trying, or from adjusting tactics along the way.

“Just because you want to do something doesn’t mean you can.”

Open Window Theatre’s current production of Lilies of the Field has that “old fashioned” feel to it, thanks in large part to the decades old F. Andrew Leslie adaptation of the William E. Barrett novel of similar vintage. Director Joy Donley and her cast do an admirable job of remaining true to the spirit of the story. The audience can’t help seeing the tale through the modern day lens of their own experiences. But if the artists involved slip accidentally into telling the story with even a hint of irony or camp, the thing falls apart. The only way we believe the good-hearted center of the story is if it exists in a world where the people on stage believe such a story is possible. Just as Open Window Theatre is artfully walking that fine line between wholesome entertainment and Christian proselytizing, this production of Lilies of the Field doesn’t shy away from religion but also doesn’t sugarcoat it.

“Faith.  It is a word for what is unreasonable.”

I’ll be honest, there was a nagging part of the back of my brain telling me I was all but required to be cynical about Lilies of the Field. Try as I might though, I just couldn’t do it. The production is just too darn charming, intelligent, and high-spirited. The story addresses race if you squint at it from the right angle. The story addresses the immigrant experience, again, if you squint. The story, in addition to touching on the challenges of blacks and women in America, also makes glancing references to the hardships in the Latino community.

“I just don’t want anyone acting like they got a rope on me.”

If you want to bring your own personal baggage in regard to race and gender and religion in this country into your viewing experience of Lilies of the Field, the production is not going to deny the validity of your feelings. The production is also not going to feed them any more fuel. If, like me, you’re waiting for something really horrible to happen, you will be disappointed, but not for long. That feeling is not disappointment, it’s actually relief (as in, oh good, nothing horrible is going to happen). Heck, even if, like me, you’re waiting for the other shoe to drop when the black veteran walks into a diner to be served breakfast, you will be not disappointed but relieved when, what do you know, the diner owner himself simply serves the black man breakfast. The things we as a modern audience expect Lilies of the Field to be about are not what Lilies of the Field is about.

“The way he studies our church, it is not the way of a man who thinks a task is impossible.”

“You got no cause to take on someone else’s dream and let it run you ragged.”

The adaptation itself is probably the biggest hurdle the production must overcome (and very nearly does). The story is told in an easygoing third person style not by ex-GI Homer or Mother Marthe, but by amiable old Father Gomez (Mark J. Paez) which seems a little odd. Father Gomez isn’t directly affected by Homer’s good deeds the way the nuns are, and his character doesn’t fundamentally change because of the actions taking place in the story. On the one hand, it does allow the adapter to jump ahead to the most dramatic parts of the story. One the other hand, we end up getting told about conversations and encounters and changes in personality that I’d much rather have seen than had reported to me second hand. But that’s 1960s novel-to-stage adaptation dramaturgy for you. There’s also a folksinger (Christopher Erickson), playing his guitar and giving us pleasant little ditties full of spoilers so we’re reassured that, reinforcing Father Gomez, somehow everything will work out all right. While all the actors make the most of the scenes of dialogue they actually do have, and while both Paez and Erickson execute their narrator duties in the most entertaining way possible, you still can’t help feeling sometimes that scenes are missing.

“It is not easy. But this too shall be done.”

Something that’s not missing is the environment for the play. Scenic Designer Tim Miller and Director Donley have utilized every inch of the space they can get their hands on. The audience has been arranged to into a formation around a diamond-shaped open central space. Homer’s car is at one corner, at the opposite end is the nuns’ dining table. Along the other axis at one corner is a table that functions as a work space for the nuns, opposite that is an area that serves multiple functions: a ladder gets leaned against a column there when Homer is working on the roof, a sign is hung there for the construction company, and a table and chair are brought out for the diner scenes. Off in a far corner behind one audience grouping is the kind of windmill you find out in the middle of farmland all over America. It’s both a nice touch and another way to make the playing space seem more expansive, and the environment for the story more vast. Donley has managed to create five entrances in the space where I could swear there should be only two, and her actors make a number of swift costume changes and entrances in unexpected places that were pretty impressive without being too flashy. Just good solid stagecraft all around.

“Life suddenly and finally caught up with him.”

The whole ensemble in this production is very strong. While the previous Open Window production I saw was more uneven—really strong lead performances with a variety of supporting players who didn’t always deliver—the cast of Lilies of the Field are both strong individually as well as making one another better when they work together. Director Donley deserves a lot of credit for both casting the piece well and then working hard to make sure that everyone is performing at the same level.

“Gott is good. He has sent to me a big strong man.”

I’d be remiss, though, if I didn’t make special mention of Lamar Jefferson’s performance as Homer. It’s a tough role because if we don’t believe Homer, then the whole story doesn’t work. Jefferson has to guide us through the play, charting each incremental step in Homer’s reluctant acceptance of his growing role in the lives of these women of God, and their mission which he ultimately takes on as his own. Half the time, he doesn’t even have anybody to talk to. He ends up talking to himself, or—and here’s a real trick—talking to an unseen bird or coyote who isn’t anything more than a sound effect. Most of the time, it’s not what Homer says in words so much as the emotions and thoughts we see crossing Jefferson’s face when he’s talking to these women who don’t understand English, or singing them a song, or listening to them sing to him in return. Homer could easily have been overblown or underplayed to the point where the audience either felt badgered or hopelessly confused. Jefferson nails it, scene after scene. Just a couple of weeks ago I saw Jefferson in a completely different role in Workhouse Theatre’s production of Eastern Standard, a 1980s comedy of manners in which Jefferson’s character was an upper class homosexual artist in pursuit of nothing more than the perfect boyfriend. That character and Homer come from entirely different worlds, yet Jefferson was convincing in both roles. You never doubt him for a minute. I wouldn’t be at all surprised if we see a lot more of this guy on bigger and bigger stages in the near future.

“No one will believe that until she proves it.”

Curtain call turns into a raucous singalong when the whole cast drops their accents and belts out “Gimme That Old Time Religion” (a song Homer sang earlier for the nuns) at the top of their lungs. You can tell by the way they smile and let loose that they’re enjoying themselves enormously, and that they love the story they’re telling. Chances are extremely good that you’ll love Lilies In The Field, too.