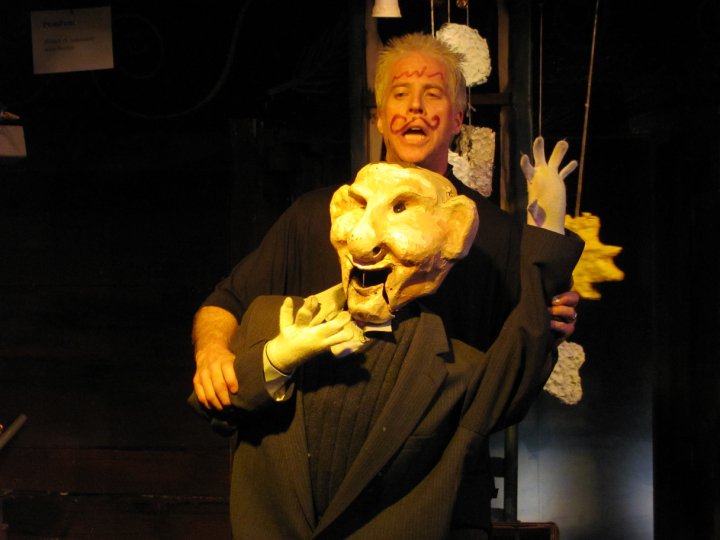 There is a rainbow in a suitcase. There is an angel with mangled wings. There is a horse with shards of mirror for eyes. There is a puppet who vomits money. There is a wall which gets completely dismantled to reveal the night skyline of a rundown part of Paris, France. These are just a handful of the bewildering and lovely things to be found Off-Leash Area’s garage in their latest production Le Squat.

The thing that continues to quietly blow my mind about Off-Leash Area is that they create theater out of and about all the things that never work for me, and yet I end up loving them anyway. Le Squat is no exception.


Le Squat is a one-person show in which Paul Herwig plays multiple characters with a variety of nationalities and accents. Half of the time, I can’t understand a thing they’re saying, since the accents are thick and the language largely untranslated. But these characters don’t spend a lot of their time talking. When they do, it’s not so much about words as about sounds, and intention.  It’s more about what they’re doing than what they’re saying.

What they’re doing is creating art. Out of trash. In Paris. In the 1980s. Oh no. Art about artists creating art. In France, no less. Sound the pretentiousness alert. And yet, Le Squat is not pretentious at all. It bewitched me completely. Le Squat attacks its subject from just the right angle. It isn’t about artists. It’s about people. People who we get to know as they go about the business of creating something out of nothing. Much of the time, we’re not even aware the characters are creating something until suddenly there it is. Random bits and pieces congeal around the performer and, bam, another strange installation is created.

The other wonderfully baffling thing about Le Squat is that it takes place on a tiny stage, in the garage in their back yard. (Jennifer Ilse and Herwig, Off-Leash Area’s artistic directors, are married.) Suspension of disbelief has a high mountain to climb here. It’s charming to follow the little arrows in the potted plants around the back of the house. It’s fun when the dog appears after the show is over to check out all the audience members who have stayed for drinks and popcorn. But can you really put on convincing theater in a garage? Those who’ve already visited that garage know the answer to that question. As a first-timer, I was pleasantly surprised to find that the answer is a resounding “Yes!” Even though I had a garage door to my right, plywood at my back, and rafters so close I could touch them just overhead, I was not only totally comfortable, I was completely sucked into another world within minutes.

This is due, of course, to exhaustive work done by performer/creator Herwig (also set, prop, lighting and sound designer), and director/developer Jennifer Ilse. Every inch of that stage, every costume piece, every item scattered about, has multiple uses. Kudos also need to go out to Phil Khalar the sound and light operator, whose task is complex and integral to the story at hand, fully supporting Herwig’s performance and helping further create a world much larger than the confines of a garage can rightly hold.

Essentially, Le Squat introduces us to the residents of a rundown building in a bad part of Paris, where they live for free, guarded by an army of winos, and create unusual and unexpected art. Those people, and that art, get recreated before our eyes in all their ramshackle glory. It was only seconds before Herwig started getting out signs to label everything toward the end of the show that I realized, “Holy crap, he just built an art museum!”  Each character leaves behind their mark on the set, and suddenly we have a collection of art.

The audience is present at the moment of creation, and they don’t even know it. Because it’s not about Art with a capital “A.” It’s about people, and what they leave behind. And that could apply to any of us, really, couldn’t it?

What will you leave behind?

While you ponder that, get your butt over to Off-Leash Area’s garage and catch Le Squat. It’s unconventional theater, but it’s some of the best theater around. Very highly recommended.