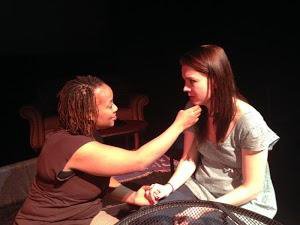 If you like romantic comedies (and I do) then A Kind of Love Story is your kind of play. (If romantic comedies bug you, you can probably skip this one.) Shadow Horse Theatre has been in town for a couple of years now (and out in Los Angeles for several years prior to that), but this is their first non-Minnesota Fringe Festival, non-Drinking Game production in the Twin Cities. For this occasion, they’ve chosen to present the regional premiere of Jenelle Riley’s comedy A Kind of Love Story at the Old Arizona Theater. The original production, which premiered in Los Angeles in 2012, won an LA Weekly award for best direction (also by Riley), and was nominated for five other LA Weekly awards—two for Best Female Comedy Performance, one for Best Male Comedy Performance, one for Comedy Ensemble, and one for Playwriting. Clearly it hit the comedy sweet spot for the California crowd.

The outline of the story is fairly simple—Ally (Kendra McMillan) and Mark (Ware Carlton-Ford) are two hopeful romantics who would be each other’s perfect match, if only they could meet. They both live in the same city, so that helps.  Mark also reads Ally’s weekly newspaper column, which is more than Ally’s boorish ex-boyfriend Max (Matthew Saxe) ever bothered to do.  Also, they’ve only got one degree of separation going since Mark’s latest disastrous attempt at dating—his vapid co-worker, Lucy (Bethany Ford Binkley)also happens to be Ally’s roommate.

Ally and Mark’s main problem is they’re willing to settle for so much less than they deserve, just in order to avoid being alone. Ally keeps letting Max back in the door for “no strings” sex, while Mark carries a torch for his friend Diane (Amanda Kay Thomm) who is married to his other friend Bob (Matt Kelly). A rogues gallery of social mishaps parades through the play—given life by Catherine Hansen, Jay Kistler, and Benjamin H. Kolis.

“Let’s go to McDonald’s sometime, but only ironically.”

If Ally would just listen to the counsel of her brash, no-nonsense friend Kelly (Kelliann Kary), rather than the unhelpful advice of Lucy, she might finally kick Max to the curb. Thankfully, a late in the second act appearance by Ally’s favorite author Casey (Siddeeqah Shabazz), who just happens to also be Mark’s older sister, may be able to help set things right. Overseeing all of this is a snarky Narrator (Christopher J. Mogel) who will not stop injecting himself into the action, even when the characters beg him to get lost.

“He could be a rapist, or disfigured, or an actor.”

A Kind of Love Story is a clever script with a lot of laugh lines scattered throughout the evening. The cast, under Bethany Simmons’ direction, does a good job of keeping things moving along. As our two heroes, Ally and Mark, Kendra McMillan and Ware Carlton-Ford give the production the strong anchors it needs. In fact, the major shortcoming of the script is that it deliberately keeps them apart until the very end, so it’s hard to invest in them as a couple, even though we like them both as individuals. The one scene where they almost have a conversation together—instant messaging online—is the one place where the play really takes off from a character standpoint. The two actors are so likable, and their chemistry together is so good, even though they’re not even making eye contact with one another, that everything clicks.

“You cheated on me with my roommate and a can of Crisco.”

Kelliann Kary is in danger of stealing the show as Ally’s straight-talking best friend Kelly. Kary’s drunk scene with Ally on their girls’ night in is a comic high point. And her self-satisfied laugh as she knocks jerks like Max down a peg or two is delightful. To his credit, Matthew Saxe is so convincing as Ally’s awful boyfriend Max that when you run into him after the show, you can only say “You are horrible” and he knows it’s a compliment.

“You are the most selfish, boorish, shallow person I’ve ever met. And I live in Los Angeles.”

Another standout in the ensemble is Siddeeqah Shabazz as Casey, Mark’s lesbian sister and Ally’s favorite author. Casey’s scene with Ally is actually kind of heartbreaking. Ally is so starved for any positive reinforcement, for anyone to acknowledge anything about her writing, that when Casey pays her several compliments, Ally feels compelled to kiss her. Casey is smart enough to recognize the awkward advance for what it is, and helps break down the last of the barriers separating Mark and Ally from finally meeting.

“I don’t want to go into space and have no one to come back to.”

Like a lot of writing out of California, Riley’s script is peppered with pop-cultural references – among them: viral YouTube videos, TV shows (Castle, Fringe, Dawson’s Creek), music (Bananarama, Gloria Gaynor), books (Bartleby, Pride and Prejudice and Zombies, a Tijuana Bible), personalities (Dane Cook, Christina Hendricks), and a whole host of movies (Precious, Star Wars, Armageddon, Sleepless In Seattle, Cinema Paradiso, Re-Animator, Nell, Inception, The Princess Bride, The Frighteners, and L.A. Confidential).  Using things like this as a sort of cultural and emotional shorthand is a tricky business.  In a lot of instances these things are used in place of actual character development.

“Did their perfect match exist and if so, why was it taking so long?”

In fact, a weakness of the script is that it can’t seem to allow anyone to have a conversation that lasts for more than 30 seconds without injecting a barrage of punchlines—or, just as likely, another speech from the narrator.  The humor doesn’t often come from a place of character or situation, and a lot of the emotional beats don’t feel fully earned.  The cast brings a lot of humanity and heart to the production, and that helps counteract the places where the material feels a little thin or derivative. But there are no surprises here. If you’ve seen any of the source material from which this script takes its inspiration, you know where the thing is headed. Which is not necessarily a bad thing. Stories like this can be the mental equivalent of comfort food. The ensemble here makes that happen. The stakes overall are fairly low—do they or don’t they get together and find happiness? There are no larger issues here. If you can invest yourself in that storyline, then you will be entertained. Given the host of darker material available in all media right now, and the coldness of the winter weather, an uncomplicated story with a happy ending tied in a neat little bow turns out to be pretty savvy counter-programming.

“You’re always so understanding, I never realized I could hurt you.”

And Shadow Horse isn’t slowing down any time soon. There’s a couple more Drinking Games ahead at the Bryant Lake Bowl: A League of Their Own and Jurassic Park (naturally, they just did one on Groundhog Day). They’ll be celebrating World Commedia Day on February 25th at the Old Arizona. And they’ll be taking the stage at Nimbus in July with Clive Barker’s CrazyFace. Kicking off the new year with A Kind of Love Story isn’t a bad way to begin their busy 2014.