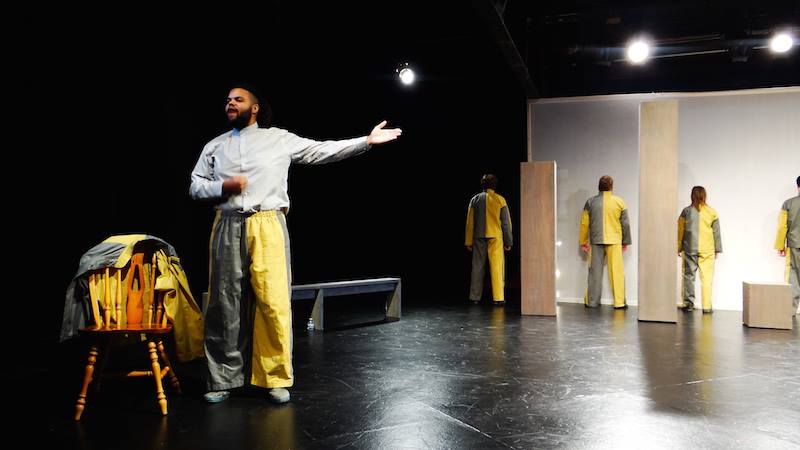 Not surprisingly, when Sandbox Theatre decides to do a musical, it isn’t like any standard musical you’ve seen or heard. This musical takes place in prison, and not the kind of musical prison Elvis Presley might recognize. More like the kind of prison you see on the reality TV series Lockup. In fact, Killer Inside is more like a prison jukebox. There isn’t typical musical theater plot or lead characters you can follow from the beginning through to the end. Everyone in the ensemble plays multiple roles. The audience gets to hear the murderous inmates of the prison recount their stories one by one, and these stories are so full of feeling that eventually they just have to burst into song and dance to fully express themselves.

“The slow flaking of stone and steel succumbing to time.”

The prison itself is a growing evolving character in the narrative of this musical. In its own way the character of the prison is just as much a commentary on society as the various killers and the reasons they feel the need to kill. The prison starts as a place designed to hopefully rehabilitate and restore the prisoners inside it. But as the prison gets larger and larger, and houses more and more inmates, the prison becomes more of a place for society to stash the people it doesn’t want to deal with, or doesn’t know what to do with. The pastor who serves the prison at the beginning of the facility’s life is far more hopeful about and sure of redemption than the (notably, female—nice touch) ministers who follow after him. And yet, even these pastors, faced with a monumental, perhaps hopeless, task continue to work for good. And every now and again they find it.

“Everything has to end, and that’s why they hire me.”

There’s a man who accidentally kills a woman as she’s resisting his sexual advances. There’s a mother who kills her children because she thinks God told her to, in order to save them from the sins of the world. There are prisoners who kill their abusive parents or spouses, the lovers who betray them, or the pedophiles who steal the innocence of their children. There’s a hit man who kills for a living. There’s a wide array of different kinds of killers, and the sometimes understandable reasons they kill. There are those who are haunted by the spirits of those they killed. There are those who long for death. There are others who long for the day they will be released, and want to be ready when it happens.

“Abraham didn’t have to go through with it. I did.”

The songs were created collaboratively by the ensemble, just as Sandbox’s standard play offerings normally are, so it’s a little hard to know who to credit with what. Obviously the violinist Charlie Henrikson (returning to Sandbox after his previous work in The Mad Trapper of Rat River) and the guitarist Derek Trost (new to playing in the Sandbox), both of whom also play multiple other instruments as well as lending their voices to key choral moments throughout, probably had a lot to do with helping to shape the songs. The Sandbox ensemble members also bring their own musical backgrounds to the table, of course. Heather Stone took the directing reins for the first time on this one. Project leads Megan Campbell Lagas and Derek Lee Miller are also part of the performing ensemble for Killer Inside, along with Evelyn Digirolamo, Kristina Fjellman, Sam L. Landman, Theo Langason, and Derek Meyer.

“That single window above the cell is called the God’s eye.”

I say this repeatedly about Sandbox Theatre, because it’s a repeated element of their way of working: they flirt, shamelessly, with being pretentious, and miraculously seem to save themselves just in the nick of time. I can feel my eyes just about to roll skyward with an accompanying internal monologue of “Oh please,” and then they turn it back around and they’ve got me back before they even had a chance to lose me. They’re wading chest deep into some pretty murky water here. Being the largely caucasian ensemble that they are, it’s hard for them to adequately touch on the element of race that’s the blood pumping through the dark heart of the American corrections industry these days (heck, not just these days, but days gone by for many years). To be fair, they are dealing specifically just with murder here, so the inequities of enforcement in regard to lesser crimes aren’t really germane to this particular discussion. The notion of the prison system writ large that keeps resurfacing was the only thing that kept bringing this question to my mind. No one play can wrap its arms fully around such a subject, but I’ll be damned if Killer Inside doesn’t give it a heck of a try.

“The price is blood, and blood has volume.”

Anytime you go poking at religion, alarm bells are probably going to go off, too. I worried that Killer Inside, starting on such a positive note on the potential good influence religion can be in rehabilitating prisoners, was bound to go to a dark and cynical place beyond redemption and then just stay there. Once things got grim – music and dancing aside—I figured there wasn’t any way they could believably turn things around.  Murderers. In prison. Death and punishment being things with such finality about them, I wasn’t counting on a happy ending. Happy might be stretching it. But the end of Killer Inside, that final song, that gathering together of human bodies and human voices, the light that might be a sunrise as much as a sunset (Heidi Eckwall’s lighting design does a lot of heavy lifting in this production, by the way, very impressive), the ending was a lot more hopeful than I dared imagine. It was all the more remarkable for the way that it felt genuine, like the play and the performers—and by extension, the audience—had earned it.

“As time rolls on,
How we gonna change?”

If you want to see one of the weirder, and more successful, forays into the musical theater genre, you should go see Killer Inside. Not only am I still trying to wrap my head around the production and all the strange corners of the human soul it was digging into, I kinda wish they had a cast album for sale, so I could sit with the songs more than once and spend some time inside the music and the lyrics. There’s a heck of a lot going on in Killer Inside, and the one viewing an audience gets seems to just barely get under the surface—just enough so you can see there’s more in there. Rough as the ride can sometimes be, Killer Inside definitely feels like repeat viewing theater to me.