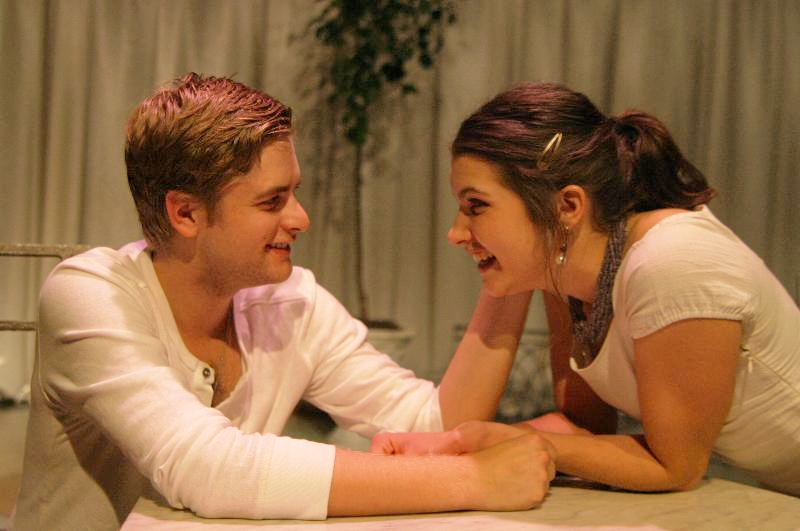 Wow, do I hate writing reviews like this one.

Because nobody sets out to do a bad piece of theater. (And those that do, well, they deserve all the bad reviews their strange priorities can get.) Red Eye Theater has been creating adventurous live performance events for 27 years now, and their stage is also home to a whole host of other intriguing, ambitious theater companies who work in this town. I’ve seen a lot of amazing theater on the Red Eye stage. Unfortunately, the current Red Eye production, Iris, doesn’t fall in that category. And much as it pains me, as a fellow writer, I have to lay most of the blame for this one at the feet of the playwright. We actually have three to thank for Iris: Kevin Anthony Kautzman channeling Charles Mee channeling Euripides (who himself was channeling someone else’s mythology). Somewhere in all the straining and reconstituting of the original tale, the story and the characters got hopelessly lost. No amount of valiant effort on the part of the eight-person cast, director Steve Busa, choreographer Laura Holway, and music and sound designer Eric Mayson was able to counteract the damage to the broken narrative.


At its center, Iris (and the original tale of Iphigenia, on which it is based) is about parents sacrificing their children for the sake of war. That subject matter is timeless. It’s why authors get sucked in by this story over and over again. It should be a slam dunk in times like these to create something powerful and deeply moving. (Having struggled myself with the classics from time to time, I know it’s not that easy. But I understand why they’re such a tempting target.)

The major stumbling block here is that the authors are trying to have it both ways. They’re trying to create both a comedy and a tragedy. They’re trying to be both modern and ancient at the same time. They’re acting as if the audience needs no prior knowledge of the original mythology, and yet the few moments that really work well are based in the audience having that prior knowledge. It makes a nod or two toward trying to be accessible, but winds up instead feeling like theater just for other theater people. The sad thing is that none of that was necessary. The building blocks, both of a good story and a good production, are all right there, but nothing ever quite clicks. It’s certainly possible to do what they’re trying to do—but for whatever reason, they don’t do it. Again, this is more the text than the execution doing the stumbling.

Spoiler alert: It’s almost impossible to talk about what’s not working here without referring to the original story, which gives away something that Iris spends an entire act trying to avoid telling us. Like so many ancient tales, this one is attached to the great battle for the city of Troy (Trojan Horse, Helen of Troy, etc.). The men want to set out on the great journey to do battle with Troy, but the gods have been offended and refuse to let the wind blow to fill the sails of the ships and send them on their way. The gods demand a sacrifice from the army’s leader, Agamemnon, who did the offending in the first place. In order to get the winds to return, he must sacrifice his daughter, Iphigenia. (Shades of Abraham and Isaac, in more ways than one, but that’s an entirely different Iphigenia story.) So Agamemnon dupes his wife Clytemnestra into thinking that they’ll be marrying off Iphigenia to the great warrior Achilles in order to lure her into bringing their daughter to the slaughter. Clytemnestra bumps into Achilles, who has no idea he was supposed to be married. Oops. Once the sacrificial plan is out of the bag, Achilles offers to help defend poor Iphigenia against those who would come to kill her—but Iphigenia decides to offer herself up as a willing sacrifice. There are various reasons offered for why she does this. It could be because it seems like the noble thing to do, sacrificing the needs of the one for the good of the many (assuming we all agree that some wars are justified, which is a big assumption). It could be that, if they don’t fight Troy, Troy will consider them weak and come for them instead, which means all women, not just Iphigenia, would be at risk, and so she’s sacrificing herself for the good of the sisterhood. It could be that she loves her father so much, she is willing to offer up her life. Or it could be that, seeing her father is not the man she always thought he was, she finds no reason to go on living. This whole affair sets off Clytemnestra’s quest for revenge, which gives us the Oresteia, and so on, and so on.

Iris spends the bulk of act one setting up for an actual wedding (which, unbeknownst to the bride and her mother, is actually the set-up for the sacrifice). If you know Iphigenia, then maybe you have a sense of creeping dread of what’s really coming. But most of the time Iris seems to assume that you don’t have that prior knowledge. So it burns through a whole lot of stage time dealing with exposition and ceremony and tradition that has nothing to do with where the play is going to wind up. There’s no payoff. Nearly all the time spent on the wedding preparations would have been better spent letting the audience in on what’s really happening, even if some of the characters are still in the dark, so the play can deal with the larger issues of war and personal sacrifice—because that’s the big game this dog is hunting. That’s where the emotional impact lies. Iris treats it almost like an afterthought or a subplot, rather than the main event.

All of which is a shame because you’ve got a cast here that seems more than up to the task of tackling a subject that intense. Special mention must be made of Melanie Wehrmacher as Lillian (this story’s Clytemnestra). Most of the time Lillian is a bit of a ditz, a mother all aflutter trying to arrange the perfect wedding. But there are moments when the hardcore mother/protector takes over—when Lillian almost seems to be threatening the audience, and does threaten her husband. (“If you go through with this, the sacrificing of our daughter, I will see you pay.”) Moments of cold fury like that let you know that Wehrmacher has a lot of steel underneath the surface of her frilly character. It made me wish the play gave her a chance to truly be Clytemnestra. That’s a production I’d happily watch.

Most of the time, though, Iris gives us the idea of people, rather than actual personalities. The idea of relationships rather than anything with emotional depth. Characters who are mouthpieces for the writers’ ideas about war and family, none of which are very specific, or original. Certainly not enough to warrant slogging through over two hours of stage time with an act break.  Plus, the characters keep reminding us we’re in for a long night—never a good sign, particularly when they’re right. Some plays are so compelling, they feel shorter than their actual running time. Other plays have the opposite problem of feeling longer than they really are. Unfortunately, Iris lands in the second group.

All the elements of good theater are present for Iris—established theater company, epic story, important subject, capable actors, director and design team—but due mostly to a wobbly script, the elements never quite come together. Which is a damn shame, and why I hate writing reviews like this one.