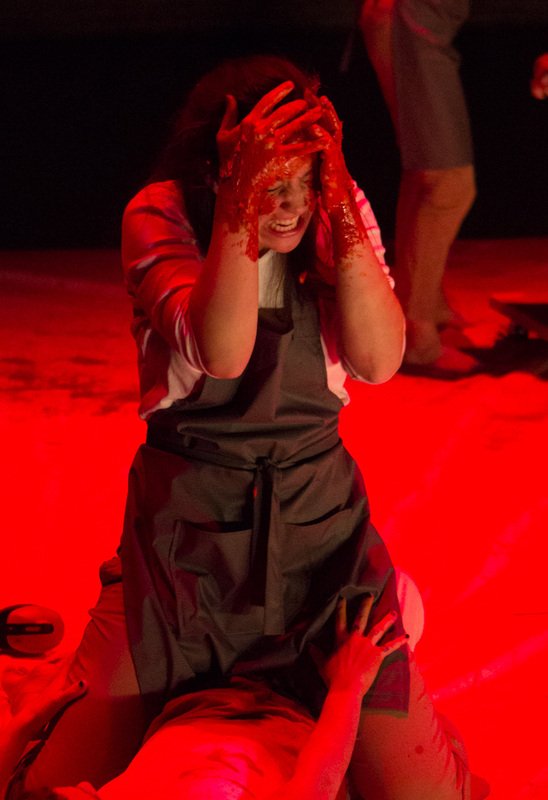 I’m squeamish. I don’t really like horror. (Wait, aren’t you the guy that wrote How To Date A Werewolf? someone asked me when I said this last night. Yes, but if you saw it, c’mon… it was the most benign zombie/werewolf love story you’re likely to experience. Certainly not something you’d find in the horror section of a movie rental portal anywhere.) Never seen a Saw movie. Not remotely interested in slasher films, despite the attractiveness of the actors. The few times I’ve broken these rules, I’ve always regretted it. Moments of violence from these things haunt me still. I don’t like to do bad things of any kind to my characters, though I must, reluctantly. Even if I kill them, I try to avoid having them stabbed repeatedly or getting their throats slit right in front of the audience. That just seems mean to everyone involved.

“You can’t work night shifts. You know the kind of work they do at night.”

Thus, people delighted in telling me that Dangerous Productions (aka RawRedMeat) really messed with people’s heads last year at the first Twin Cities Horror Festival, and they were back for more of the same. A whole vat of stage blood. The program for the festival warns in all caps DO NOT BRING CHILDREN to Hear No Evil. I can understand why. Kids would likely be traumatized. Why was I not hiding under something by the time the show was over? Well, it’s theater. Unlike a child, I understand that what’s happening in front of me isn’t really happening. Unlike when I watch a film, and get the pleasure of seeing someone disemboweled through the magic of special effects, there’s only so much a theater artist can do right in front of me.

“Allow the nightmare to take the bait.”

That said, the ladies of Dangerous Productions do plenty. The program doesn’t assign characters so here’s the hard-working, blood-spattered, high-strung ensemble – Emilia Allen, Liz Carey-Linskey, Michelle Casali, Anna Hickey, Megan Koester, Shannon Leach, Laura Mahler, and Michelle Makie. All written and directed by Tyler Olsen, who also helped craft the blood effects (with Sean McArdle) and sound design (with Taj Ruler). I wonder how he unwinds after something like this… never mind, I probably don’t want to know.

Someone turned to me after the house lights came up at the end and asked with a puzzled look on their face, “Did you get that?” Uh, strangely enough, yeah. It’s sort of like a joke, if you stop to explain it in linear fashion it loses a little of its shine. And I don’t want to be a spoiler since half the fun of Hear No Evil is trying to figure out what the heck is going on. Hear No Evil ends up being an oddly moral universe. People pay for their sins, and then some. The best thing about Hear No Evil is its palpable sense of dread. The characters are leery of the night shift, so we are leery of the night shift. The characters are freaked out, so we’re freaked out. If the characters can’t relax, we can’t relax.

“That’s the third time I’ve tried to kill her.”

The coolest thing about watching Hear No Evil, in addition to the never-ending creepiness of it, is that it all fits together. Even things that seem to be nonsensical, like the way the women writhe around on the floor, or invade one another’s realities, or the overlapping of flashbacks and present time, or the absence of things and people that seem like they should be visible. When the last layer of this situation is peeled back and revealed for what it truly is, it all makes a strange, terrible kind of sense.

“I told you I can’t work the night shift. Not after what happened to my niece.”

And at the same time your brain’s working with the larger puzzle, you get the low-tech old school horror movie strategies of the audience seeing the bad thing coming before the characters do, ratcheting up the tension that much more. I wasn’t sure they could sustain the tension or the mystery in this story for a full hour, but boy did they. That’s because everyone has the end in mind from the very beginning, and they’re guiding the audience through the weirdness of this world every step of the way.