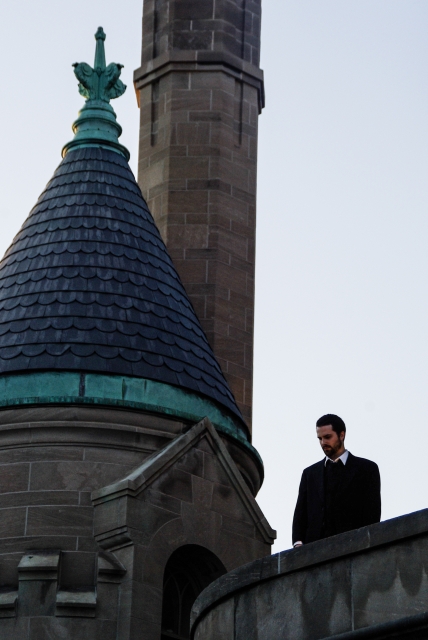 Theatre Coup d’Etat‘s production of Hamlet has a lot of strengths going for it, but the chief one among them is that they trust Shakespeare’s script to do most of the heavy lifting. Even though the production takes place in the third floor ballroom of the opulent old stone and wooden building that houses the American Swedish Institute, this Hamlet could almost be described as bare bones in terms of production values. There are a couple of chairs, brought in very sparingly, but other than that, it’s just actors and the words in a wide open space, surrounded close by with audience on three sides. And they’re not afraid of the audience. Suddenly, you may find Hamlet looking you right in the eye during one of his many famous soliloquies. It’s the kind of production of Shakespeare I wish we saw more of, the kind that gets out of the way and just lets the story do its work.

The play is part ghost story, part revenge tale. Prince Hamlet (Peter Beard) is exhorted by the ghost of his father the king to avenge his death at the hands of his brother, Hamlet’s uncle (and new stepfather and king), Claudius (Art Peden). Claudius took both his brother’s throne and his brother’s wife the queen, Gertrude (Meri Golden). Hamlet’s quest for vengeance manages to take out two families in the process: his own, and the family of his girlfriend Ophelia (Kelly Nelson), who along with her father Polonius (Jim Ahrens) and brother Laertes (James Napoleon Stone), is too close to the palace intrigue to emerge unscathed. Throw in the prince’s old school chums Rosencrantz (Adam Scarpello) and Guildenstern (Michael Brown), and Hamlet’s mission ends up with an awfully high body count. Only Hamlet’s best friend Horatio (a female confidante in this production) (Brie Roland) will live to tell the tale.

Beard and Stone are also the co-directors of this production, and they’ve found a great setting for it. The ballroom has five entrances, on all sides of the audience, and all of the doors see a lot of traffic. There is also a small stage at one end of the space that gets frequent use—sometimes as an actual stage for the play within a play, sometimes as a graveyard. Except for a fancy patterned rug and the aforementioned chairs, there’s really no set to speak of. The lighting is simple (up for day, down for night and scene breaks). It’s a perfect incubator in which the language of the play can really breathe and connect with the audience. There are many repeat performers from the stable of past Coup d’Etat productions here, as well as several able newcomers to the group, who play well with Shakespeare’s text. The production works best when the actors are living inside the lines—as if they were things a person might actually say—rather than simply reciting or declaiming them. Thankfully the majority of actors in the cast are working at this level.

Not surprisingly, first and foremost in this category is Beard himself as Hamlet. He makes you believe Hamlet is a real person, and these soliloquies are his private thoughts. These don’t have the feeling of speeches that have been memorized; they feel as if they are ideas occurring to him in the moment. Also, even when Hamlet’s being a jerk, in Beard’s hands the guy is such a charming jerk that you realize why it’s hard for anyone to give up on him entirely. And, like the best actors of scripts old or new, he doesn’t act between the words, adding pauses or layering on gestures to make sure we know what he means. He makes us understand the words as they are being spoken—since, after all, words are intended to convey meaning, it’s why we use them rather than silence. I know this sounds like the simplest thing in the world but I’ve lost count of the number of actors who’ve fallen into this trap, especially with Shakespeare.

Happily, the actors in this production largely avoid that trap. In fact, I feel compelled to give a special shout-out to the supporting players in particular, all of them especially strong. The actors who give us the traveling players (Alec Barniskis, Cameron Cylkowski, and Tyler Stamm) do double and triple duty with multiple characters. In addition to the entertaining traveling theater troupe that pricks the conscience of a guilty king, they also give life to the night watchmen Barnardo and Marcellus (Stamm and Cylkowski) who first see the ghost of Hamlet’s father wandering the night.  Barniskis does an amusing turn as a solo gravedigger late in the action, Stamm provides the traveling actors with some colorful puppets for their murderous little play, and Cylkowski gets some cheeky fun out of a cameo as a sailor bringing messages to Horatio (the fact that she’s a woman isn’t lost on him at all).

Brie Roland’s Horatio was a gender switch that was surprisingly a non-issue.  Roland fits right in with the rest of the ensemble. Her friendship with Beard’s Hamlet is believable and genuine. When Hamlet goes off the rails and people start turning on one another right and left, the audience can reliably look to Horatio to be the calm at the center of the storm, and to gauge just how treacherous things are off of her response to them. Hamlet and Horatio’s farewell scene at the end is touching, and grounds the play’s political maneuvering in its very human consequences.

Likewise, Scarpello and Brown as Rosencrantz and Guildenstern do a nice job showing us two hapless fellows not quite able to navigate the changing winds of fortune between their friend the prince and the king and queen. Scarpello also served as the fight choreographer and captain, no small task given the close proximity of the audience to the climactic battle of blades between Hamlet and Laertes. To make that fight seem dangerous, and yet not dangerous to the audience, is tricky, but they not only pulled it off, they injected a lot of humor into it as well.

There was also some humor in Emily Garber’s costume design. The ensemble as a whole holds together well visually. Ophelia in particular gets several eye-catching outfits. The costuming in-joke that amused me most was when Hamlet went into slovenly mode and started wearing jeans and T-shirts. One of his T-shirts was a five-day weather forecast for the planet Alderaan: three days of sun and then, suddenly, no weather at all. Hamlet is also seen wandering the palace reading from a book about director Peter Brook.

Two things I don’t often say about a production of Hamlet: I really missed Polonius after he was dead, and I enjoyed Ophelia’s mad scene. This is due to some really fine performance work by Jim Ahrens as Polonius and Kelly Nelson as Ophelia. Both those roles are littered with pitfalls for an actor as well as a production, but Ahrens doesn’t settle for being just an officious blowhard. He’s a man with a job and a family to care for. Rather than being a man who butts in where he’s not wanted, this Polonius seems more like a guy who just stumbled into a situation that was way more dangerous than he realized—until it was too late.

Ophelia gets short shrift from the playwright in the first half, often just a pawn played off against the prince by the king and queen like poor Rosencrantz and Guildenstern. But man, when Ophelia loses her marbles, Nelson is both heartbreaking and terrifying. She handles nearly the entire mad scene in song, which is remarkably effective. You still get everything she’s saying, but the feeling behind the words is much more full. If someone makes the mistake of trying to touch her, the scream when she recoils from them echoes through the ballroom. When Laertes later carries her body in his arms across the length of the ballroom to the stage where the graveyard lies, we feel the loss, too, and understand Laertes is trying to avenge his own family going forward.

One struggle in this production is that Art Peden as Claudius is not yet in full control of all the king’s lines. For a low-tech production they decided on a rather high-tech solution: Peden is being fed some of his lines through an earpiece. As a nod of solidarity, the royal guard are also wearing earpieces, perhaps to make it seem like a security thing. The crutch is more obvious in some moments than others, and unfortunately it does seem to be taking the wind out of queen Gertrude’s sails as well in several scenes. However, there are some Claudius moments that Peden really nails, particularly when the mask of civility comes off and the man is fighting for his life against Hamlet’s plot to undo him. Claudius becomes a quite intimidating foe. And his send-off is perfect—when forced at knifepoint to drink something he knows has been poisoned, Claudius gives one final flourish by clinking his glass against Hamlet’s raised sword in a toast to his enemy, and then drinking. It made me wonder how much better the production might have been if Peden hadn’t run into this snag and was operating full-out for the whole show. That’s a Claudius I’d like to see. (By the end of the run, he may yet get there.)

As I said above, this is the kind of Shakespeare production I like to see, and rarely do—a good story well (and simply) told. If you’re a fan of hearing the Bard’s words spoken by people who know what they’re doing, you should treat yourself to Theatre Coup d’Etat’s Hamlet.