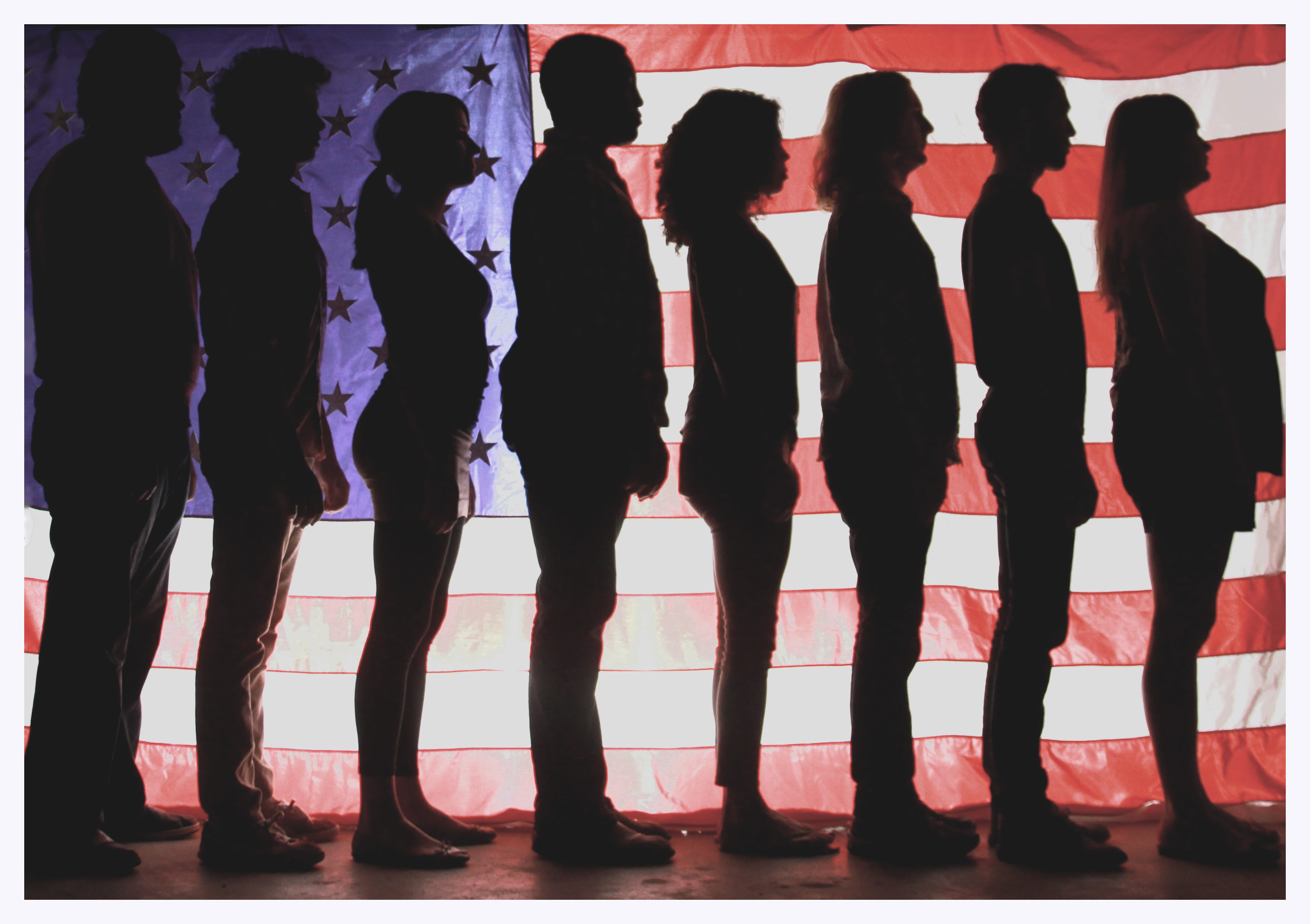 7th House Theater Collective‘s production of the 1960s rock musical Hair is a high energy, pansexual, anarchic, lovably weird piece of ensemble theater. It’s a full-body immersion in another time.  It’s foul-mouthed, race conscious, and likes to show a lot of skin. It’s a wonderful example of how a group of artists can truly work together as a team and build something that’s fun to get lost in. From the opening strains of “The Age of Aquarius” to the closing notes of “Let The Sunshine In,” it’s clear the collective has assembled a roster of powerhouse vocalists to belt out these tunes.  The live band is also going to town on these songs.

Really the only thing that’s keeping Hair from being a great piece of theater right now is the sound mix. It’s not for lack of trying: the guy running the sound board is getting just as much of a workout as the performers. At times, the vocals are cranked so high you get that telltale squeak of feedback (but only a millisecond’s worth and ever so rarely; this guy knows his stuff). Much as I loved the band, if an actor is miked and less than six feet away from me and I still can’t understand what they’re singing, I could do with a little less rocking out and a little more “Hair Unplugged.”  Every single time they pulled it down to just one instrument, or something acoustic (like a ukelele, of all things), I felt like cheering.  Yay, now I can finally hear them.

Which is a shame, because I wanted to enjoy all these elements together. Taken individually, they’re working like gangbusters. Put them all together, they’re still fighting one another a little bit for supremacy rather than meeting halfway. Which is the bitch of rock musicals: they want to rock. They should rock. When they’re in balance, like Minneapolis Musical Theater’s Bare or Theater Latte Da’s Spring Awakening (or blank slate theatre’s Spring Awakening), they are transcendent pieces of theater. When they’re a little wonky, like Mixed Blood’s Next To Normal, the cast gets swallowed up by the band. The Hair tribe isn’t getting swallowed whole. They often break through—but it’s a battle. And voices like the ones on Cat Brindisi, David Darrow, Derek Prestly, and Matt Riehle are not easily overpowered. I’ve seen some of these actors blow the roof off the place in other shows. What can you do? Their band rocks really hard in the small warehouse space that is 514 Studios: talents will collide. (That band, by the way: Matt Keseley, Meghan Kujawa, Eric Mayson, and Jesse River. Kudos.)

“Don’t ask me, it’s your hallucination.”

It’s a testament to the Hair ensemble that even when we don’t get all the words, we still get it. Their unrestrained enthusiasm for the characters and the story comes through loud and clear. Hair isn’t much for plot anyway. It’s about an experience. The fact that they can channel some of the spirit of a culture that existed decades before any of these performers were even born is fantastic.

“How dare they try to end this beauty.”

As someone said to me at intermission, “You almost don’t know where to look.” Hair already changes focus on its characters on a rolling basis throughout the evening. Add to that the fact that every single member of the ensemble is completely plugged into this experience, and to every one of their fellow actors, and no matter where you look, something interesting is going on. And that something interesting is feeding right back into whatever the main focus of the scene ends up being. It sounds cute, but it’s true: they’re more than an ensemble, they’re a tribe. (That tribe, by the way, in addition to Brinidisi, Darrow, Prestly, and Riehle, includes Gracie Anderson, Tara Borman, Katie Bradley, Brianna Graham, Kelly Hansen, Caroline Innerbichler, Theo Langason, Rudolph Searles III, and Grant Sorenson.)

“You’ve got a lot of nerve.”
“I’m gonna spread it around the world!”

It’s a tribe they welcome the audience into as well.  From the moment you enter the space, the actors are engaging you.  If you’re not shy, they might have you get up and dance, or put their head in your lap. They don’t have to break the fourth wall: there is no fourth wall. They’re not performing for you, they’re performing with you. (Be prepared to turn to the American flag on the wall and sing the National Anthem at the beginning.) Several times members of the audience would spontaneously begin clapping along without being prompted by anyone onstage. Hair is the kind of production that engages you that way. The energy of over a dozen actors dancing around every corner of the space—in front of, behind and even in the audience—can’t help but be infectious. (Choreographer Emily King must have had a ball with these performers.)

“Why do these words sound so nasty?”

Hair still speaks to issues of race and sexuality in intriguing ways. Whole songs are given up to lists of racial stereotypes or methods of pleasuring yourself and others. Giving voice to those words and letting them roil around in the air, while it may no longer be as shocking as it once was, will still make you think in ways you don’t in your day to day life. But it’s the gleeful way this production throws human bodies up against each other in countless combinations that really drives the point home. Even though we still (always, it seems) have a long way to go, this production in this time shows how far we’ve come. The comfort level, and even joy, with which girls dance with girls, and boys dance with boys, warmed my heart, I’m not gonna lie. And in a dueling songs portion of the program all about the romantic mixing of the races, with white ladies extolling the virtues of black men, while ladies of color did the same for the white boys, we got a nice little twist. The ladies of color were a black woman, an asian woman, and a gay black man—as if to say, hey, we all can appreciate a white boy, right? Even though Hair regularly puts race front and center for the audience (a young black female Abe Lincoln, among many other examples), you get the feeling the cast is at the same time almost defiantly colorblind.

Politics around war, not surprisingly, is thornier ground. Hair, and the counterculture protest movement of the 1960s which spawned it, is all about burning draft cards and the specter of getting shipped off to fight the Vietnam War (and returning in a flag-draped coffin). The draft is a thing of the past, even though wars are not. In fact, you could argue that the reason we so easily get ourselves embroiled in messes like the wars in Afghanistan and Iraq is that the vast majority of the country can safely go about their business, secure in the knowledge that the horrors of war will never impact them directly. We have an all volunteer force now (though with dwindling job and educational opportunities that exist in many communities, the notion of what volunteering means is certainly debatable). The way we treat our veterans is still shameful (don’t get me started). When there was a draft, we all—at least on paper—shared the pain. Sure there was draft dodging and people calling in favors to help their children avoid service, but more people served. More people understood what war meant. It couldn’t be easily ignored. And it couldn’t go on indefinitely without cost. Nowadays, we sanitize it, when we cover it in our news at all. The cost is obscured, if not invisible, on a daily basis. So the wars go on and we dream up new ones we should get ourselves involved in. If it were literally life and death for every guy between the ages of 18 and 26 like it used to be, then we might actually have a conversation. Hair is less resonant on this topic in 2013, even though it shouldn’t be. It didn’t quite click—and with U.S. troops fighting and dying in foreign countries right now, it shouldn’t just be clicking, it should be screaming. The audience and the actors got off easy on that one.

“Out in the technical streets with my daffodils.”

Honestly, though, so much is right with Hair, you really need to see it. It’s not often you get to see a show that vibrates with an energy this palpable. The show is fully alive, and it extends that gift to the audience. If you want to leave the theater feeling positively buoyant, you should grab yourself a big hunk of Hair. I look forward to seeing what 7th House Theater Collective has in store for us next. Highly recommended.

Read Becky Lang’s 2011 review of the touring Broadway production of Hair at the Orpheum Theatre.