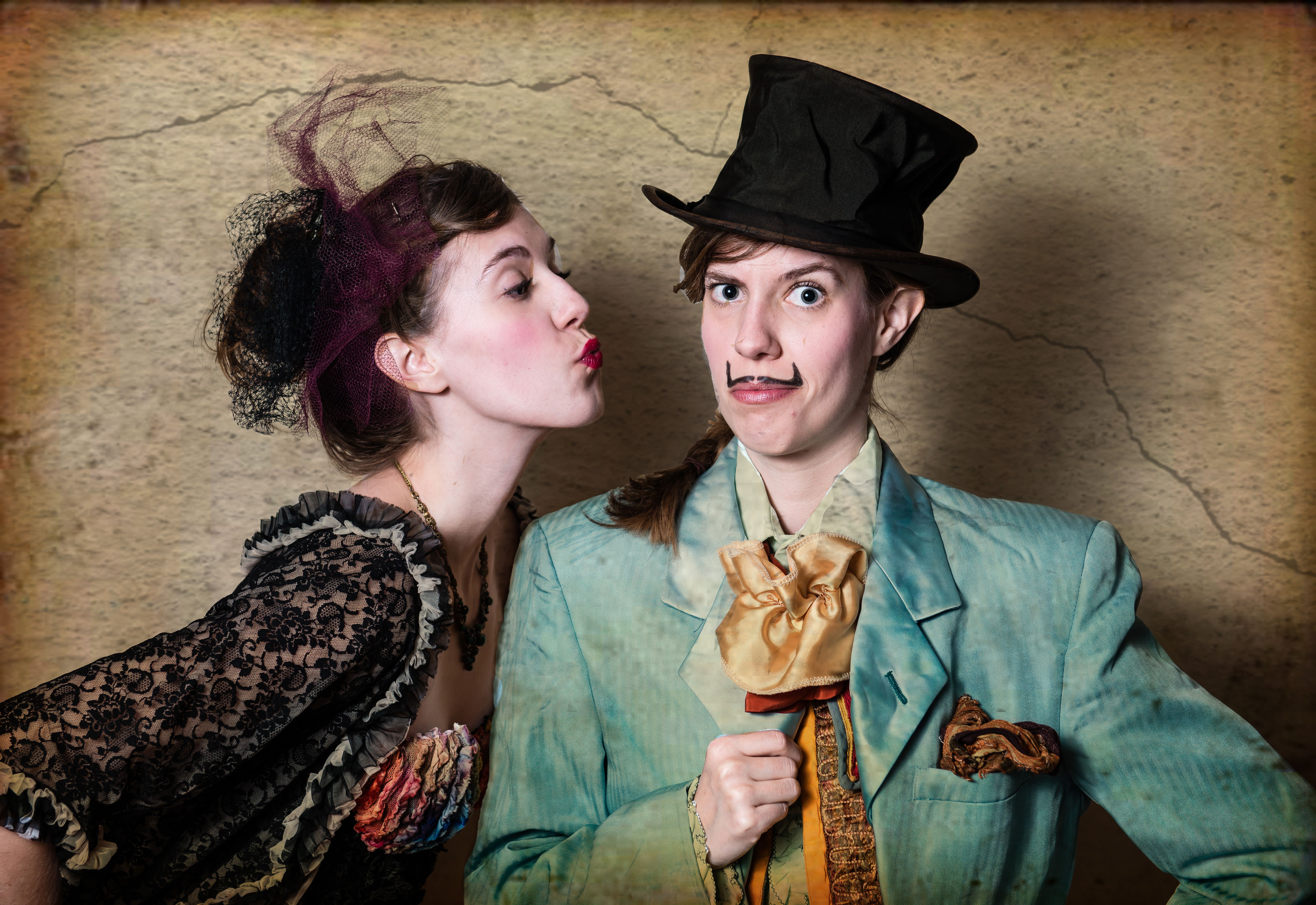 Let’s get the basics out of the way right up front: is Theatre Pro Rata‘s production of Good Woman of Setzuan a great piece of theater?  Absolutely.  Should you go?  That depends on how you feel about Bertolt Brecht.

“In our part of the world, there is nothing unusual about poverty.”

I had to sleep on this one because this play bugged the heck out of me and I had to figure out why, and whether that was any justification for not going.  Because Brecht is a withholding son of a bitch.  And he’s doing it quite deliberately.  You know how Walpole says this world “is a comedy to those who think, and a tragedy to those who feel?”  Brecht both thinks and feels but he only wants his audience to do the former.  Were people laughing during Good Woman of Setzuan?  Yes, often and loudly.  And the whole time they were guffawing I sat there wondering, “Why is everyone laughing?  This story is horrifying!”  Despite Brecht’s and Pro Rata’s best efforts, I guess I was still in a feeling mood.

“No one can be good and stay good.”

Three buffoonish gods (Peyton McCandless, Andrew Toth and Molly Pach) wander into the town of Setzuan looking for a place to stay the night.  Wong (Ben Layne), the peasant who sells water to people on the street, tries to help the gods find shelter but is having trouble until he comes to the home of the town whore Shen Te (Kelsey Cramer).  For her hospitality, the gods gift Shen Te with enough money to start her own shop.  Shen Te wants to continue to do good for other people, but other people take advantage of her good intentions.

“Keep your gods.  We have our own troubles.”

The worst offender is Yang Sun (Foster Johns), a young man who claims to love Shen Te, but is really just using her to get the money he needs to learn to be a pilot and leave her behind.  Yang Sun is aided in his scheme by his cold-hearted mother Mrs. Yang (Karen Bix).  Shen Te also catches the eye of the only decent man in town, Mr. Shu Fu (also Foster Johns).  Mr. Shu Fu is a true philanthropist, and his good deeds are only magnified by his love for Shen Te, which seems in danger of being unrequited.

In order not to be undone by the human vultures circling her, Shen Te masquerades as her own male cousin Shui Ta.  Shui Ta is able to make the tough decisions and give the hard orders that Shen Te feels unable to do as a woman.  Shui Ta manages to get everyone in line, despite the questionable morality involved in some of her schemes.  Unfortunately, too many people insist on seeing Shen Te and Shui Ta in the same place at the same time, and all the good she’s done looks ready to unravel.

“When I saw the holes in his shoes I loved him dearly.”

How can one be a good person in a selfish society?  How can one do good deeds without other people bleeding you dry or turning yourself into a monster just to survive?  Brecht wants his audience to be bedeviled by such questions.  And he’s not interested in giving them answers.  Because it’s essentially an insoluble problem.  Anyone who pretended to have the solution should be laughed out of the theater.  But Brecht wanted people to be mad.  Brecht wanted people to get off their butts, leave the theater and DO something about it.

Brecht and Pro Rata are both working constantly to remind you that you’re seeing a play.  This starts with the scenic design by Sadie Ward, the costume design by Mandi Johnson, the lighting design by Julia Carlis, and the sound design by Jacob M. Davis.  If you’ve ever seen a Guthrie Theater production where they’re trying to reproduce the look of poverty, yet still end up spending hundreds of thousands of dollars on the show, then you know the look that Pro Rata is aiming for, and nails big time.  That sense of self-conscious artifice.  Rather than attempting and failing at something, they’re drawing attention to the fact that this is not what poverty looks like, this is what our idea of poverty looks like.  This isn’t an accidental ramshackle shoestring theater production look, this is what you expect edgy and low budget to look like but we’re doing it deliberately so it’s just a little too tidy.

“Old fashioned clothes, dust on their feet, they must be gods.”

This distancing also comes from the structure and writing of the script itself.  Brecht doesn’t want you to get too close to the characters, to feel for them in any way that might let the spectator off the hook.  It’s not just a story, it’s a problem that needs solving.  So there are frequent interludes of song by a number of the characters to break things up.  Composer and assistant sound designer Topher Pirkl has done a great job scoring Brecht’s lyrics – the songs are all high points for the show.  Also, the script is fairly barebones emotionally.  Most of the characters aren’t given great personal depths to plumb and the acting style by most of the ensemble reinforces Brecht’s strategy (additional actors rounding out the ensemble not mentioned previously are Kayla Dvorak Feld, Shannon Troy Jones, and Pro Rata regular Amber Bjork).

“I only have to put my hand on her shoulder and church bells ring.”

The three notable exceptions to this are Kelsey Cramer and Foster Johns, each with dual roles to play, and Karen Bix as Mrs. Yang.  Bix is delightfully ruthless on her son’s behalf throughout the story.  Cramer brings a lot of heart to Shen Te and an equal amount of mercilessness to Shui Ta.  She so easily shoulders the load of being the central character of this tale that you’re inclined to forget just how tricky her assignment is.  Johns brings all kinds of levels to the selfish character of Yang Sun.  The audience could be forgiven for almost falling for him as hard as Shen Te does before he shows his true colors.  Johns is also having great fun slapping on a beard and a funny hat and hamming up a storm as the good-natured Mr. Shu Fu.  In fact, the beard and hat are connected to each other and there are many amusing moments when the beard and hat are held out in mid-air so Johns can throw his voice to the character in the midst of whatever else the production has him doing.  The moments when Yang Sun and Mr. Shu Fu are arguing with each other are particularly ludicrous and fun.

“One weakness is enough and love is the deadliest.”

Director Carin Bratlie does an amazing job threading the needle on this one – keeping Good Woman of Setzuan from drifting into sentimentality and yet not making the delivery of the story so stilted and fake that it becomes less than human and thus a boring academic exercise (a frequent pitfall of “classical theater”).  If you like Brecht, I can’t imagine that you wouldn’t love what Theatre Pro Rata is doing here.  If you’ve never seen Brecht, Pro Rata is offering up a perfect introduction to this type of theater.  I honestly can’t imagine it being done better.  Me personally, I’m torn about how I feel about my response to Brecht screwing with me as an audience member.  After all, if I’m supposed to be frustrated, then the play has accomplished what it set out to do.  Just because I don’t like being frustrated doesn’t mean the production isn’t good, or the play isn’t good.  In fact, I can see the production is spot on.  If the play isn’t my thing, well, I guess that’s my problem.

“Why has he left his pants behind?”

I can’t think of a reason someone shouldn’t go.  Perhaps, like many of my fellow theater goers on opening night, you’ll laugh yourself silly all night long.  Or, if you’re more like me, maybe the play will bug you enough that it’s still sticking with you, poking the soft spots in your brain several days later.  Neither of those is a bad thing.  I’d like to think that theater this good is never a bad thing.