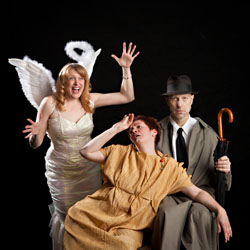 It’s a credit to the scripts and the performances that the evening held up as well as it did. But a lot of the time it didn’t seem like there was much production support backing up their work. It was sometimes hard to tell if these were directing choices or the dictates of a production constrained by a limited budget. The whole thing from a text and performance standpoint didn’t have the air of a workshop at all, so the repeated visual disconnect of the sparse environment for these stories was puzzling. Perhaps the high-water mark of design work for their fall presentation of Bertram’s The Good Fight spoiled me and has raised my expectations of what they can deliver. But even the 24:00:00 Xtreme Theatre Smackdown, with just a 24-hour turnaround time, seemed to have more consistent production values. That said, adjust your expectations and focus instead on the plays and the performers, and you’ll come away with a most interesting evening of theater.

“We are so upset, we speak in unison!”

In an evening this varied, it’s hard not to play favorites. I have to admit to being charmed by the total wackiness of Wasserstein and Durang’s mash-up of a stack of ancient Greek tragedies, including the titular Medea. Stacey Poirier, who has played Medea for straight-up tragedy for Unbound in the past, was clearly having a ball going for laughs this time in her extravagant wig and over-the-top makeup, bulging her eyes and gesticulating for maximum melodrama. Baily, Johnsen and Zeiler made for a most amusing Greek chorus, alternating between ancient Greek allusions and modern day American pop cultural references. Tallen as a cross-gender Jason, Kelly as a gaffe-prone Messenger, and Pyan as bumbling Deus Ex Machina were all very much in the tongue-in-cheek spirit of things. You didn’t have to get all the classical theater in-jokes to enjoy the gags in this one. Director Gould kept this one humming along at just the right pace. It was a great way to start the evening.

At the opposite end of the dramatic spectrum, right after intermission, Churchill’s The Judge’s Wife had all the muscular language and prickly characters we’ve come to expect from her. The actors all relished the opportunity to dig into Churchill’s meaty dialogue and director Scanlan doesn’t try to sand off the rough edges of these characters. Stephen Houtz is delightfully vile as the judge. He’s the proud guardian of the status quo. He’s also generous with the insults, particularly to the women in his life. The judge’s long-suffering wife (Giordano) stands by her (unappreciative) man, while her sister (Poirier again) constantly provokes the self-important couple, along with a very angry cook (Gould). In slowly unfolding video clips, it becomes clear that the judge is the target of assassination out in the snowy woods. The more you get to know the guy, the more conflicted you feel about actually enjoying the fact that he’s destined for a bullet in the back of the head. It wouldn’t be Churchill if we weren’t knee deep in politics and dissecting the fates of the haves and have nots in society.

“To eliminate the entire population would be impractical, but not impossible.”

It was in The Judge’s Wife that the strange production values proved most baffling. There was video, and smart costuming. But apparently this well-to-do household can afford chairs, but no table—tea cups, but no bowls or silverware. The combination of solid objects and mime didn’t seem to have any rhyme or reason to it. You could concoct explanations for it all, I suppose, but the more I tried to, the more it felt like rationalization for the lack of a coherent strategy. All of which is too bad, because this distraction aside, it was one of the shorts I enjoyed the most.

Perhaps the most unusual and intriguing of the five shorts was one written specifically for the Lowry Lab space in which it was performed, Bertram and Brady’s collaboration titled Within. It was a story without words, where a wanderer (Vang) gets sidetracked by three people in hoodies (Buchda, Gould again, and Martin) collectively known as Lethargy, and must be liberated by two ladies in red (Gillies, Kelly again) known as Life Force. Half the fun there is watching the cast literally work the room. Life Force spends much of their time pounding around underneath the audience risers, climbing up the sculpted metal fence alongside the theater seats and just generally making up new ways to enter the play.

“Whatever possessed me to marry a law student?”

The remaining pieces were both female duos. Lost had almost zero production values, while The Obligatory Scene was full to bursting, making me wish the overall showcase had spread the love around a bit. While it was great seeing Laura Wiebers and Delta Rae Giordano teaming up on stage again in Lost, and they work well together as a couple of friends whose forgetfulness slows down their quest to make it to a party, the enormous void they were forced to perform in made the whole scene quite bewildering. Noe Tallen and Victoria Pyan were also fun to watch at work together onstage in The Obligatory Scene, and they had plenty of props to play with besides. Frankly, it was nice to see a play with a lesbian couple who didn’t break up or die at the end for a change (oops, spoiler alert). Come for the convoluted, amusing emotional argument, stay for them actually staying together.

Theatre Unbound’s Girl Shorts is a great idea, and they chose a great cross-section of scripts for its first outing. It’s definitely worth catching. Next time, the production will hopefully look just as good as the material it’s presenting.