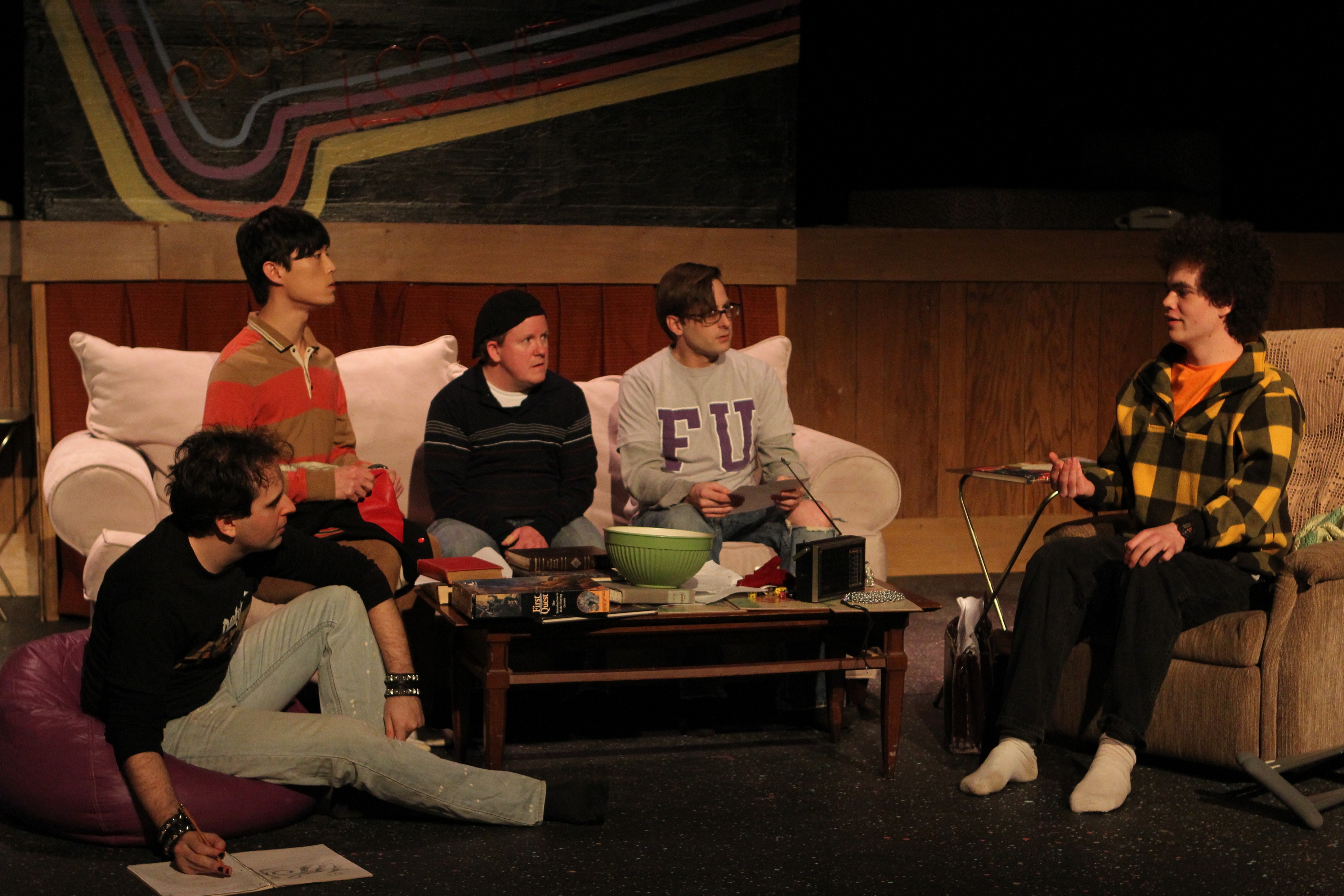 Freshwater Theatre Company’s production of Ruben Carbajal’s The Gifted Program starts with a goth guy listening to the Violent Femmes’ “Add It Up” on his boombox when he receives a phone call from a girl who is smoking from the My Little Pony she has fashioned into a bong.

If that comic sensibility and nostalgia for the John Hughes high school films of the 1980s appeals to you, then there’s a lot you’re going to like about The Gifted Program. It’s stuffed with familiar high school archetypes (there’s a baker’s dozen of actors involved in the multiple subplots). The sound design by Scot Moore is full to bursting with songs that are going to pull you right back into the past.

The gifted program of the title, for students of above average intelligence, has been dismantled. The geeks have been returned into the wilds of the general high school population. The assimilation is not going well. A small cadre of unrepentant dweebs has found refuge in their regular Dungeons and Dragons meetings. One of their number, however, has developed a secret life as a lothario of the airwaves.

“Women like romantic shit. You’ve got romance coming out of your ass.”

Paul (Garek Bushnell) has gained quite a reputation as a romantic, known only as PW, from his repeated dedications to an unidentified girl named Cyndi. DJ Ricky Redstone (Kelli Gorr) encourages Paul to come clean about Cyndi’s identity. The Cyndi in question is Cyndi Stearns (Tamara Titsworth), naturally one of the loveliest and most popular girls in school.  But once that cat’s out of the bag, mean girls Shelly (Sabreena Candreva) and Melody (Peyton McCandless) won’t rest until they discover who PW really is as well.

“I spent the last hour and a half in an Olympics of humiliation. Pain is my sport. I’m good at getting hurt.”

Meanwhile, Paul’s gaming compatriots have problems of their own. Lester (Michael Sung-Ho) finds his dreams of early admittance to MIT derailed by a gym class requirement, watched over with a jaundiced eye by the school’s bitter Coach Whitelaw (Paul Schoenack).

“You want to make out with Bong Water here? Fine!”

Joey (Jesse Corder) is about to find out that his unrequited crush on best friend Brenda (Kelly Houlehan) isn’t as unrequited as he thought, much to the chagrin of Brenda’s current boyfriend Tim (Doug Burger). Joey is also being aggressively stalked by My Little Pony bong-maker Candy (Rebecca Gebhart) (though the attention isn’t entirely unwelcome—Joey just has no clue what to do with a girl who’s actually interested). In addition, Joey has been drafted by teacher Ms. Roland (Gorr again) to take another bewildered geek under his wing, Steve (John Leaf). Steve gets just a little too invested in the personal dynamics of the D&D group, and starts upending the status quo.

“I am the monarch of hopelessness.”

Bill (Ben Resman) may be the leader of the gaming group, but his shortness of stature makes him an easy target for the entire school population. Bill refuses to give up, of course, even when he probably should.

“Field house?! That’s the Death Star of jocks! No way!”

I love that Freshwater does new plays by local writers (this one being from a Wisconsin native). I also love that they’re not afraid to do a play requiring 13 human bodies (and a couple of those were even doubling roles). Giving a writer the gift of being able to write for as many characters as they feel they need is rare. The plethora of one-, two-, and three-person shows littering the theater landscape is evidence of this.

Freshwater also has a slew of accompanying events to go along with the run of the play: things as simple as paper tacked up in the lobby for the audience to scribble their own high school memories, a Sadie Hawkins dance, a late night recreation of speech competitions from the past, and performances of three brand new one-acts designed to be used for future high school one act competitions (not to mention a reading of another script they’re considering for future production). Freshwater has created a whole environment in which this play can live.

“All you guys care about is capturing and raping she-wolves.”

The production has all the charm and earnestness of the characters struggling to achieve their hearts’ desires. So if you’re looking for a simple, uncomplicated piece of entertainment, there’s a lot to like in The Gifted Program. If that’s all you need to know, just skip on over to their website and get yourself some tickets. This production is a real gift to the author. Everyone involved is doing their best to emphasize all the strengths of the script and downplay its weak spots. I will now surrender to my inner playwright which has some dramaturgical and structural problems with the play.

“You’re a mean and bitter dude.”

Though I realize this regional premiere is of a published work and not a work in progress, I still couldn’t help wishing that the author could have spent some time with Freshwater co-founder and resident playwright Ruth Virkus. Virkus showed with last Fringe’s Going Down On the Queen of Minneapolis that she’s skilled in knowing just how to juggle a large ensemble of characters and multiple plotlines and making the audience feel like every character got his or her due, and all the plot strands got tied off neatly in the end. And she had less than an hour. The Gifted Program, even with two acts, has some troubles in this regard.

For instance, given that the play starts with him and he’s involved in multiple subplots, you’d think The Gifted Program was centered around Joey. But it’s not. The other way the play tips, making the big PW revelation at the end of act one, and having most of the second act (including the end) center around the unraveling of Paul’s fortunes once his secret identity is known, seems to make the case that it’s Paul’s plotline which is the spine of the script.  But there are so many other characters, so many other subplots, all scrambling for some stage time throughout the play, that it’s never quite clear where the focus is supposed to go.

“If I’m lucky, I’ll be able to afford a little cabin up north, do a little fishing, and die.”

Also, The Gifted Program isn’t just an homage to John Hughes films of the late 20th century. It often feels like it’s trying to be a film. Rather than embrace the advantages of theater, where you can do nearly anything you want with next to nothing so long as you engage the audience’s imagination, The Gifted Program seems to be straining against all the “limitations” of theater. As spectacular and versatile as Ursula Bowden’s set is—and it is both versatile and spectacular—it’s never going to literally be a series of high school hallways or the basements of various geek family homesteads in the same way that film and TV offer that verisimilitude. Also, when the scene’s over in a film, you don’t have to take down the lights and push the furniture around. You just cut to the next scene.

Film and TV have the luxury of extras to simulate the teaming life of a high school. One of the chief joys of theater is that you may have fewer people, but you actually have the opportunity to get to know each one. In fact, any two or three of these characters and any one story could have filled an entire evening of theater. A reduced character roster would have allowed for more breathing room for actual character development to take place, for there to be genuine physical and emotional stakes, for their to be consequences for people’s actions. In other words, for the characters of The Gifted Program to really feel like the fully fleshed-out human beings the skeleton of the current stories seem to want us to think they are.

“I used to have the luxury of being a nobody.”

For instance, I wanted to be fully invested in the possible relationship between Paul and Cyndi. The script gives us ample opportunity to get to know Garek Bushnell as Paul. But Cyndi—despite all the hard work from Tamara Titsworth—is essentially as much a cipher at the end of the play as she is at the beginning. Paul and Cyndi’s big scene at the end should have had us both cheering and devastated, but the script just didn’t set us up properly for that payoff. Cyndi had to cram almost all her character development into a single scene while that scene was supposed to be getting a lot of other things done.

In general, the women all get short shrift. The actresses all do their best to counteract this, but the script doesn’t give them much with which to work. Strangely (and commendably) the female character who ends up being most compelling is DJ Ricky Redstone. Kelli Gor has that perfect sultry voice for a radio personality, and even though she isn’t allowed to make eye contact with any of her scene partners, she really convinces you that she has history with the people she’s talking to, particularly Paul. Give the audience a three person play with Paul, Cyndi, and the DJ, really dig deep into the characters, and that play has the power to be transformative.

“Why don’t you go off to MIT and build yourself a friend.”

The Gifted Program rushes headlong through so many plot points in so many different stories, none of them really reflecting off of or providing contrast to anything around it, that it feels more like a grab bag of random ideas than a play with an overall cohesive structure to it. The Gifted Program often feels like it’s less than the sum of its parts, because the parts are never allowed to add up to anything.

That said, Freshwater’s production has charm to spare. The actors are all very winning and bring a lot of heart to their band of misfits (even though it’s clear that a lot of them have been out of high school for quite some time…that’s what suspension of disbelief is for). If you’re looking for genial entertainment (and don’t get hung up on the sort of story concerns that bug me), then The Gifted Program is an extremely pleasant way to pass an evening in the theater.